It has been 20 years since I graduated from high school. We wanted to have a reunion of few close buddies who are still in touch. The last such reunion we had was in 2019, when a pal from Canada and another from Australia were visiting India during the year-end holiday. Of course, soon Corona virus hit us and we all were trapped in our homes.

END_OF_DOCUMENT_TOKEN_TO_BE_REPLACED

When DVD of Cake arrived, I was questioning what would be movie be about. Well I had somehow have escaped the hype and hoopla over the film during the last award season and hence didn’t really have a clue of the film as such. The DVD cover features an uncharacteristic looking Jeniffer Aniston.

Cake is a movie which deals with the subject of chronic pain and addiction to prescription medicines. END_OF_DOCUMENT_TOKEN_TO_BE_REPLACED

‘Home Entertainment Services by Sony DADC’ releases CAKE on Blu-ray & DVD, an absolute treat for all Jennifer Aniston fans. This inspiring drama film is written by Patrick Tobin and directed by Daniel Barnz. CAKE is a story about Claire who becomes fascinated by the suicide of a woman in her chronic pain support group while grappling with her own, personal tragedy. END_OF_DOCUMENT_TOKEN_TO_BE_REPLACED

Mad About Moviez (MAM) and Home Entertainment Services by Sony DADC bring to you CAKE Contest, wherein you can a win DVD of the film. Here are the details of the contest.  All participants have to start off by liking the Facebook page of Sony DADC. You need to answer just 2 easy questions:- END_OF_DOCUMENT_TOKEN_TO_BE_REPLACED

A film based on an Elmore Leaonrd novel. The first thought that comes to mind is Quentin Tarantino’s now cult classic “Jackie Brown”, a film based on “Rum Punch”. It gave us two memorable screen cons – Ordell Robbie played by an excellent Samuel L. Jackson and Louis Gara (Robert De Niro). “Life Of Crime”, based on “The Switch” brings back the characters in their Detroit years, 1978 to be exact. But this time we don’t have the great Samuel L. Jackson and Robert De Niro but Yasiin Bey, a.k.a Mos Def and John Hawkes respectively. Tarantino’s chops are tried on by Daniel Schechter. These are major steps down but these are not what really affect the film. END_OF_DOCUMENT_TOKEN_TO_BE_REPLACED

We’re the Millers has been written by a posse of four writers and yet it cannot boast of a plot that would fill more than one page. The writers obviously were working on a barebone of a story, embellishing it with situations they can use to unleash their wicked humour. Actually not even that. Most situations have been lifted from any road movie with an RV in it. END_OF_DOCUMENT_TOKEN_TO_BE_REPLACED 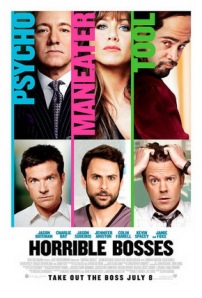 Comedies are something that can be repetitive but can still be funny depending upon the execution and treatment given to it. Most of the times when it comes to comedy, people go for safe bets which is basically slapstick humor or sex comedies both of which have a big market everywhere. However, we have been lucky enough in the last few years to be able to see variety in terms of not just with the type of humor but with variety in terms of plots that we witness which are not just funny but also very intriguing. Death at the funeral (UK version), Shaun of the dead, Superbad, The Hangover, Zombieland & Bridesmaids are a few which comes to mind, and the movie which recently made me laugh out loud when I was supposed to and not just laugh at the movie itself, Horrible bosses. As the name suggests and rather needless to say that you will agree with me that bosses are indeed horrible and the only people who think they are awesome are bosses themselves.

Horrible Bosses kicks off with us being introduced to the life of the lead characters Nick Hendricks played by Jason Bateman, Dale Arbus enacted by Charlie Day &  Jason Sudeikis done by Kurt Buckman through the backdrop of their jobs and of course their Horrible Bosses evilly & cunningly pulled off by heavyweights  Jennifer Aniston (Dr. Julia Harris, D.D.S.),  Kevin Spacey (Dave Harken) & Colin“one look at him and laugh out Loud” Farrell –  Bobby Pellitt. Kevin Spacey plays the most realistic type of boss that we may have to deal with. Though I wish Jennifer Aniston’s character as a boss was done by a real man, more on that later. Horrible Bosses screenplay unfolds simultaneously moving parallel from ones life to other cut to them sitting in the bar removing their frustration and bitching about their bosses over drinks.I still don’t understand why, I mean why Dale Arbus – Charlie Day hates his boss Jennifer Aniston, more on that later, but I am sure by now you must have figured it out. Anyways, over drinks they hypothetically talk about killing their bosses which soon takes shape the other day when Dale Arbus – Charlie Day above all three of them Charlie Day wants his boss dead and convinces the other two and thus begins the confusion and chaos.

Kevin Spacey is a total Dickhead and ruined the life of Jason Bateman  by not promoting  him and threatening him to even not to leave the company. Colin Farrell  is a total Cokehead who just wants to extract all the profits from his father’s company and Jennifer Aniston is a total Hornyhead and Charlie Day is getting engaged to his girlfriend so he just can’t give his horns to his sex predator boss. They decide to kill each others bosses to avoid being caught.  Thus starts the ways to kill their bosses and the people they meet in order to make this plan a success. The USP of this movie without a shadow of the doubt are the powerhouse actors. They make Horrible Bosses which is good,look even better. The concept of the movie is something which everyone can relate to which adds an extra tadka on the script.

The situations steal the show in the latter half of the movie. However, it is the lines which invoke the funny bones from the start and it steadily continues throughout the film making it an enjoyable watch throughout. The pace remains steadily progressive and the movie itself never setting a benchmark beyond which it can’t surpass thus making it very likeable. Lines are hilarious

– Unfortunately, no one’s gonna pay you
to be a husband unless you marry Oprah.

The other thing which catches the eye in terms of humor was some of the explanation of the situations that the characters get in to. Jamie Foxx plays a character named Motherfucker Jones, I mean that really pushes it right in terms of name. If you do not roll out laughing when you hear how he got his name and how he ends up in jail then I promise I will watch HouseFull-2 or Charlie Days sob story as to why he was caught as a sex offender. Thats the beauty of this movie even though the situations and lines are hilarious even the small things are cleanly put across and made sure you flex your face muscle. The color tones are beautiful & a bit dark essentially capturing the fact that there is murder coming.

The performance as said earlier adds the extra weight to the humor. Jason Bateman with his typical deadpan face does a good job especially the opening scene. Jason Sudeikis  – Kurt Buckman provides good ample support. Kevin Spacey plays an asshole to the T. He does make sure that we really do hate him and in between he invokes laughter with his antics. Jennifer Aniston playing a role of horny bitch is refreshing. To see her play something which completely contradicts anything she has done so far was a treat to watch. Jamie Foxx puts in a performance which will make sure that you will talk about him after done with the movie especially with the name like MotherFucker Jones. However, the man who steals the show is Charlie Day who plays this goofy messy yet loveable Dale Arbus. He pulls of the confused helpless character perfectly without we feeling too sorry for him and manage to make us laugh out loud in most scenes with him involved. Colin Farell  is superb as a cokehead even though he doesn’t have many lines or scenes whenever he comes on screen just looking at him makes you laugh.

Horrible Bosses is funny but not in a cliched way and has something to offer for everyone in terms of humor. It is something which you will watch once and yet not pick up everything and repeat viewing  of it will only make it funnier.