Satyajit Ray has always faced the accusation of ignoring political realities in his films. Ray may never have been a left card carrying member, but his movies always have focused on how human lives are impacted due to the larger context of politics right from Apu to his last film Agantuk.

Ray does not waste time in establishing the urgency, the first scene shows a doctor being concerned with the spread of a waterborne disease which he feels is due to contamination. Then in the next few minutes he establishes the major characters of the film in the living room of the doctor.

Ganashatru in hindsight today comes across as the foresight of Ray who could foresee the rise of militant Hinduism and the development mantra which is nothing more than greed of India’s middle class masked as the need of the people.

Dr. Ashoke Gupta (Soumitra Chatterjee) discovers that the residents of a small town are falling ill due to contamination in a water body, the source being the locally developed new temple which has been gaining prominence over the past ten years.

The problem is Ashoke’s disclosure supported by scientific evidence will lead to the downfall of the economy of the booming small town which the stakeholders who are profiting from the activities of the temple are unwilling to bear.

Even though the film is shot mostly in interiors due to Ray’s health condition and it is one of his last films,I feel that the master uses the interiors very effectively and kudos to him for he kept on learning even at the end of his lifetime. 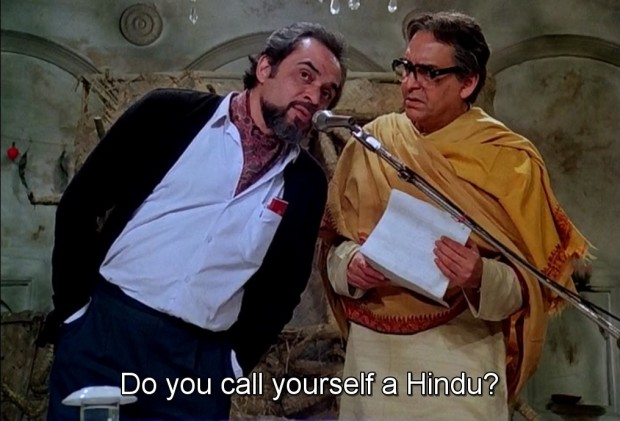 Ray exposes the so called middle class talks, which routinely takes place among upper caste Hindus, they are not pure evil or xenophobic. Ray instead here focuses on the start of fascism, a false sense of pride among commoners, here many people are afraid to question or accept the fact that religion can be wrong.

In a beautiful scene, Ray shows a typical middle class conversation; it goes on with new temple, to how powerful the idol is. I must admit  I was feeding milk to Ganapati and many other idols at the ripe age of 5, which my atheist father never opposed, but explained the rule of gravity after the incident.

In a scene, Ashoke Gupta says he is a Hindu but does not support certain rituals because he has found science. Yet public are unwilling to listen and crucify him before he can express his view, the scene is relevant even today where we judge people on statements taken out of the context.

In another wonderful scene, Ray stages the downfall of Haridas – an editor of a so called progressive newspaper. It starts with him mulling to publish an article by the doctor, which indicts and expose the duplicity of temple and municipal authorities.

When Indrani (Mamta Shankar) daughter of the doctor comes to meet him, there we see his other side. Ray stages this scene so effectively where he shows the downfall of this editor as some sleazy man, it is as if Ray was predicting Tarun Tejpal. Then when the chairman of the municipal commission Nishit (Dhritiman Chatterjee) comes he senses an opportunity for him and the newspaper and decides he will not publish the article and later on colludes with Nishit to disown the credibility of the doctor. 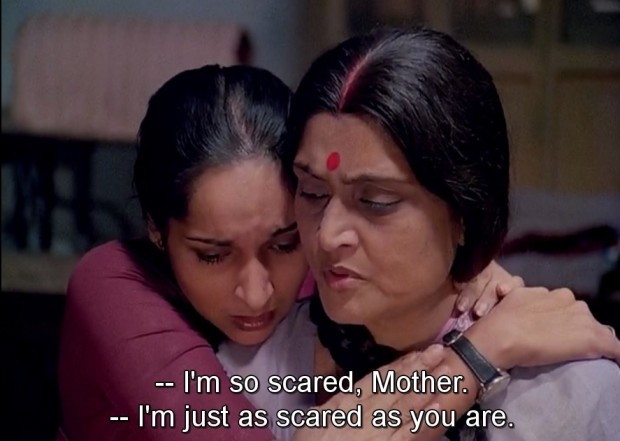 In one scene Maya (Ruma Guha), the  doctor’s wife, comments that Nishit might dress like a western man, but when it comes to values, he is still a conservative, a scathing remark by Ray on our middle class which may wear Forever 21 or Zara but is still traditional and conservative when it comes to important things in life like marriage.

Not to forget that Ray is one of the few Indian directors who could show romance, the way Indian middle class romances, not the chiffon saree pseudo romance. In a touching scene the doctor in a way of assuring his wife keeps his hand over her to show it will all go well, when the speech does not go out as planned, he returns dejected and Ray again focus his camera on their hands and this time it is his wife who keeps her hand over him to assure him.

Ray’s Ganashatru might not be his best work, but still it has the hallmark of a genius, it shows how we could foresee the downfall of Gandhi’s India where we could coexist to a nation which is ruled by majoritarianism.