‘Nee vaa thozha’, in those powerfully asserted words, starts the opening ‘Ulagam Oruvanukka’ song with a very clearly ‘oruvan oruvan mudhalali’(Muthu) inspired beat. The beat slowly also changes to a more ‘maro maro’(Boys) beat, but inspirations aside let us see how the graph of the song proceeds. Sa Na (Short hereafter for Santhosh Narayanan) himself starts the vocals and you do have initial jitters if whether a relatively less experienced singer like him can do justice to the enormous duty of delivering a superstar intro song. The song has a steadily energetic feel to it with good chorus and strong lyrics. The lyrics till the first whistle are pretty straightforward hero worship stuff with a small dose of anti-establishment flavor. The nice Hollywood western type whistle, followed by a slightly awkward ‘Kabali’ chant give way to a totally different ball game though. This is also just the time at which the song clearly says that Kabali has been a cage for long and is released into the nation now (cage- jail possibly????)

The song goes on a different plane from here. Be it the super English rap section, some very aggressive anti-establishment lyrics, a marked lift in Sa Na’s singing and Gana bala entering and stealing the vocal thunder in the high point of the song ‘Mettukuduyin koopadu ini nattukkula kekkadhu…..’ (The orders of the ruling class will no longer be heard in the country). Goosebumps.

There are a lot of interesting plot hints in the song too including Rajni’s return from captivity, fighting the Kuala Lumpur gang (K-town gang), voice of the underprivileged tamizh ‘inam’ in Malaysia and so on.

Though Sa Na’s trusted partner and left hand man Pradeep opens and leads ‘Maya Nadhi’ along with Swetha Mohan, the song excels mainly because of the free hand given to Ananthu, who plays a rather low key support vocal role in the previous songs. This song is a pretty reliable, standard Sa Na – Pradeep melody fare going by their work in many of their previous outings, especially with an evident ‘Cuckoo’ orchestration hangover. But what is really novel is the free ghazal hand given to Ananthu, who just sings variation after variation with zero inhibition and that is really refreshing in such a commercial outing. This song also has a very key line emphasized to give a story point away. ‘Thooya narayilum kadhal malarudhe. Yanai balaminge serum uravile. Pona vazhiyile vazhkkai thirumbudhe’. Even in the age of pure white hair, romance is blossoming, the bond is as strong as an elephant and life has taken a u turn to the past. Most likely, this is a song where Rajni meets his lady love after many years and rekindles his bonds of love.

‘Vaanam Parthen’ is a sad and melodious song where Pradeep gets a much better chance to show his talents and fully own a song with his vocal skills. The song seems to be a background one playing when Kabali is separated from his lady and expresses in multiple ways his incompleteness without her presence. The atmospheric arrangements are very good and special mention must be made of the strings portion by the Macedonian Symphonic Orchestra. The arrangements keep varying in intensity and variety along the song based on Pradeep’s vocal travels. Very well put together.

We are back to some kick ass star power in the by now popular ‘Neruppa da’ Kabali theme. This song is what you get when a colossal star of Rajni’s proportions surrenders to the musical talents of today’s generation to take his glory forward. The track is a stunner from second 1 and just doesn’t let you go.  And what is again important is even in its most starry moments, the song doesn’t let go of language quality. In fact, raw and aggressive tamizh is again used as a device to take stardom forward. The central tune from the teaser of course is the pivot of the track and is used in multiple variants to tantalize each time. It is pulsating all the 3 times when Thalaivar speaks in the song and when he goes ‘naan vandhutten nu sollu…..  Kabali da’ your heart as a Rajni fan boy can’t hold any more joy. Big, big round of applause to Arunraja Kamaraj for his wonderful work on the rebellious lyrics and some brutishly aggressive vocals. He might be slowly positioning himself as a theme specialist with efforts like ‘Theri’ and ‘Kadhalum Kadandhu Pogum’, but succeeding in a Rajni theme song is surely akin to a test century at Lords and he does that with flair and irreverence.

‘Veera thurandhara’ is a much more mellowed down, stylish hero worship song. I must admit I did not like it initially and couldn’t identify much with it. But on repeated hears, it starts getting a bit catchy and works much better. For the 2nd time in this album Sa Na brings out a totally different dimension of Gana Bala and he does a pretty admirable job. Other than the nice humming in the middle by Pradeep, I couldn’t figure out what exactly were the contributions of the other 2 singers credited for the song, Pradeep and Lawrence. The English rap (probably by Lawrence) is again pretty foot tapping and well done though it lacks the clarity of the section in the intro song.  Watch out when Bala sings ‘vazhi kattum thalivanae ini aram uranguma….’. Class. 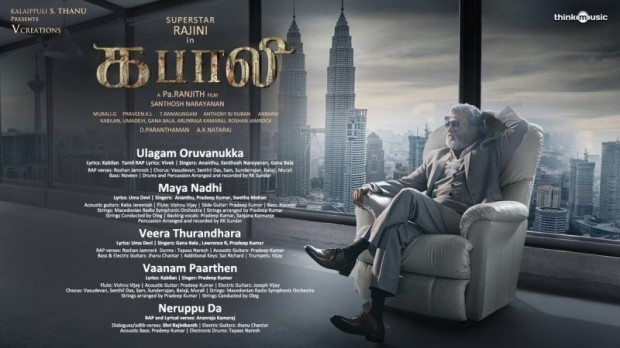 The album does a lot of things right and does them boldly. It is definitely a Santhosh Narayanan album first and even the super star tropes it pulls of are well within his framework and it doesn’t sell itself out to gimmickry of any sort. It is probably the most ‘tamizh’ Rajni album in recent times, especially amongst his mainstream, commercial outings (Kochadadiyan did have some good ancient tamizh). So credit must go to Pa.Ranjith for getting the best out of the battery of lyricists he has operated with and maintaining high lyrical quality with a special mention to the rebellious quality of the mass numbers.

What all the album isn’t? It is not a typical Rajni film with a rousing opening number by SPB. It does not have any conventional romantic duets or rags to riches numbers. In fact, I don’t visualize thalaivar lip syncing even a single song in the album.  It is also unlikely that a random non-tamizh fan will just pick up a song and like it just for the tune. At best that could happen with the theme or intro songs. Heck I wouldn’t even call most of the songs conventionally hummable even by a tamizh speaker.

Having said all that. I am in absolute love with the album. It has multiple things going for it. 3 intelligent massy songs, 2 good melodies, a wide range of emotions and a new generation of talent supporting a Rajni enterprise. Each song seems to represent some aspect of the movie’s narrative and each line clearly has purpose, musically and lyrically. That by itself is a lot to ask for in today’s day and age. Musically atleast all indications are that Kabali will definitely be the sincere reboot our beloved superstar truly deserves. 3.75 on 5 for me.

P.S: Songs in the order of release on Think Music youtube channel

View all posts by Badri Parthasarathy