Let’s admit it, we have all faced adversities in some form or the other, or at least have known people who have faced it. We have also perhaps managed to overcome the same or know people who have been successful in fighting their way back. This is perhaps why we love to watch, or listen to tales of people, who face their crisis head on and emerge a winner. If conveyed in the right manner, there is definitely no way that the tale would not find acceptance. Somewhere down the line we perhaps even look for some inspiration in all these tales, whether we admit it or not. At the very outset there is nothing new that you find in Vineeth Sreenivasan’s latest film as director, JacobinteSwargarajyam. So a family that is prosperous, enterprising and level headed, faces an unexpected calamity, putting a big question mark over their very existence. What’s the crisis that the family faces, how do they handle it and whether they manage to conquer it being the story, now this is something that gives one a sense of déjà vu right? 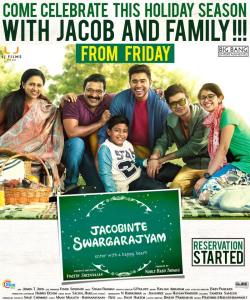 Well yes Vineeth Sreenivasan knows that while it’s a very relevant story and inspired by real life events that affected a family in Dubai, it’s all about how the tale is presented and made engaging to the audience. So the task was not going to be easy at all, not when one starts off with the reality that the result could backfire if the subject is not handled with enough care and attention. And that’s exactly what Vineeth has gone on to do and in an admirable manner as well. The film revolves around Jacob (Renji Panicker) and his wonderful family, comprising of his wife Sherly (Lakshmy Ramakrishnan) and four children, Jerry (Nivin Pauly), Abin (Sreenath Bhasi), Ammu (Aima Sebastian), and Chris (Stacen). Jacob is a successful businessman in Dubai who enjoys a lot of goodwill in the trade and he loves his family above all. One fine day their World crashes down as Jacob encounters a major financial crisis thanks to a trusted business associate who cheats him. The turn of events force Jerry to shoulder the responsibilities of the family and the rest of the film is all about he tries to overcome the crisis and take care of his family.

The film begins in right earnest as we see Jacob playing his role as the dutiful father, husband and businessman, taking care of his priorities and trying to instil his principles in Jerry as well. But thankfully it’s done in a subtle manner and there is no overkill. We also get a brief view of how despite being worldly wise, Jacob is primarily a Good Samaritan at heart, helping all kinds of people, which includes those who have worked with him earlier and his friends. Perhaps Vineeth shows that side of Jacob in an attempt to prepare us for the setback that Jacob faces later, in a way making us question if helping others in today’s competitive environment is the right thing to do or not. Vineeth’s writing is quite impressive, weaving in characters and moments that leave quite an impact. Anyone today would be tempted to let the tale revolve around Jerry considering the kind of popularity that Nivin Pauly is enjoying these days, but full marks to Vineeth for ensuring that the other characters also get a lot of importance and to Nivin for cheerfully going along with Vineeth’s vision and narrative. 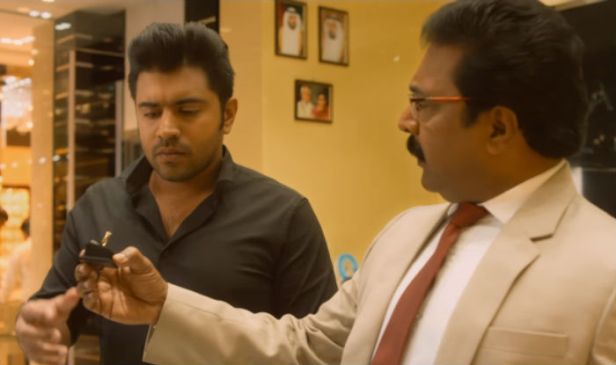 There’s this moment in the film when the chips are down for Jacob’s family and Sherly informs Jerry that they will have to sell off all their assets, which means even letting go of their employees and selling off their Mercedes-Benz as well. Jerry is heartbroken but nevertheless puts up a brave face and goes on to sell the car, accompanied by their trusted driver of all these years, Unni Ettan (T.G.Ravi). Unni Ettan knows that he is about to lose his job, but there is nothing discussed about it and no tears shed. What we instead see is him taking Jerry on one final wild spin before the car is sold off. And when the deed is done and as Unni Ettan walks off, he goes on to slowly untuck his shirt and roll up his sleeves, signalling that he’s off work for now. Towards the end of the film we see the reverse as Unni Ettan hastily tries tucking in his shirt while getting into the car, if this is not detailing and at the same time conveying the message with just about the right level of emotional quotient, then what is?

It is also refreshing to see that while the second half revolves around Jerry’s efforts to bring back order back into the family and revive their fortunes, Sherly and even Abin are well utilised. Aju Varghese’s cameo gives Vineeth the slight departure to show off some of the tourist attractions in U.A.E, but thankfully that is justified to an extent by a situation that calls for it. Jomon T.John’s cinematography is effective as always and so is the editing by Ranjan Abraham. At a run time of 145 minutes the film chugs along merrily and there’s never a dull moment. Shaan Rahman’s songs are suitably pleasing to the ears and leave a good impact on us, the pick of the lot being the Onam song “Thiruvaavaniraavu” (lyrics by Manu Manjith and vocals by Unni Menon, Sithara and Meera Scharma). The grouse if any with the film for anyone watching it could be the fact that you do know what is eventually going to happen,for that sake there is no surprise element, but then that is quite made clear by Vineeth Sreenivasan himself as he says that there are many such stories, but he chose to convey the story of his friend over here. 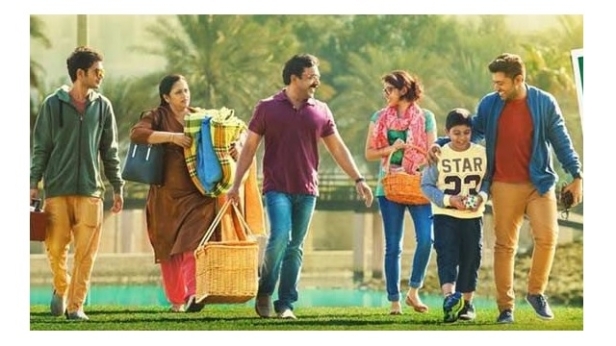 It is also interesting to see that Vineeth Sreenivasan keeps the focus almost always on the family saga; there is no room for forced comedy or even a distracting romance despite the fact that Jerry has a girlfriend, Chippy (Reba Monica John).  Reba is just seen in a handful of scenes, fitting into the character of a medical student and Jerry’s girlfriend. Ashwin Kumar plays the role of businessman Murali Menon (a good replacement for Gautham Vasudev Menon who was initially supposed to do it) with a lot of conviction, he conveys the tough no nonsense look essential to his character very well. Both Aima Sebastian and Stacen as Ammu and Chris are very endearing and make their presence felt. Sai Kumar, Dinesh Prabhakar and T.G.Ravi are all reliable as usual, playing characters that matter a lot to Jacob and his family. Vineeth Sreenivasan himself appears in a cameo as Yusuf Shah, a businessman who inspires Jerry. Sreenath Bhasi as Abin is perfectly cast as the rebel son of Jacob, it also helps that he is also a musician in his real life, similar to his role over here.

Lakshmy Ramakrishnan as Sherly is lovely, she carries a lot of spunk and is inspiring in many ways, not just to Jerry but also in general as she comes across as a woman who doesn’t sit and rue her fate but decides to fight out till her husband returns and their business is back on track. Nivin Pauly plays Jerry with conviction, initially he is the typical 25 year old who is still not sure about what do with his future, but slowly but surely emerges as a strong character who takes care of his family. His scenes with Renji Panicker are a highlight, carrying a lot of warmth in a characteristic way. But the best thing about the film is the performance of Renji Panicker who plays Jacob with total comfort and style. Watching him portray Jacob it won’t be a surprise if you see in him an ideal dad, husband, colleague or boss. While he more or less disappears in the second half of the film for a long time, you do miss his presence and that shows the kind of impact that he leaves with his performance.

Vineeth Sreenivasan has certainly improved a lot as a writer and as a filmmaker,Jacobinte Swargarajyam being the finest film made by him so far. Yes it doesn’t tease you or surprise you in any way but then it’s quite a film with a lot of heart. Being the holiday season and with Vishu just around the corner, Jacobinte Swargarajyam is the kind of film that should resonate well with family audiences. No matter whether you have a Dubai connection or not this is a tale that you will connect with and Vineeth certainly makes sure of that. After all the family that fights all odds together, stays together.

5 thoughts on “Jacobinte Swargarajyam Movie Review: The Family That Fights All Odds Together, Stays Together”