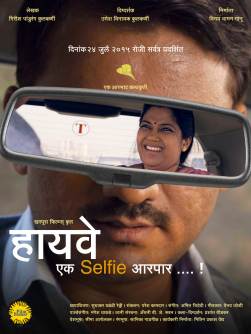 ‘Sometimes it’s the journey that teaches you a lot about your destination’ – Drake. Perhaps it is this thought that has inspired director Umesh Kulkarni and writer actor Girish Kulkarni’s new film Highway .

If we go by the norms of mainstream cinema, there’s not much one can say while attempting to dissect the film’s story or plot. Still if one were to ask, it is essentially traces the lives and journey of several characters as they travel from Mumbai to Pune in different ways. And through these characters, the film takes a peek at our individual, combined lives and the differences that exist within the different kind of people that live in our society.

There’s an NRI (Girish Kulkarni) who’s en route to meet his dying father and is forced to help a married couple (Renuka Shahane, Vidyadhar Joshi)  when the husband meets with an accident, a TV actress (Huma Qureshi) who is going to attend an event hosted by a local politician, a much hassled corporate employee (Sunil Barve) travelling with his pregnant wife (Vrushali Kulkarni), a house wife (Tisca Chopra) headed out for an extramarital romp with a young guy, a mysterious South Indian male (Nagraj Manjule) carrying an equally mysterious package, a sex worker (Mukta Barve) travelling with an uncomfortable passenger are some of these interesting characters who form a part of this journey.

Since their first film Valu, the duo of Umesh and Girish Kulkarni has explored themes that are interesting, diverse yet realistic and decidedly explore a rural landscape. However with Highway, they make an attempt to tackle the urban and chaotic city life. Highway would also rank as the most challenging project of the duo till date, for they tell several diverse stories in a single film.

The camera work (Sudhakar Yakkanti Reddy) which has several hand held shots perfectly captures the claustrophobic theme of the film. The camera moves through the cramped spaces of cars, taxis and buses and perfectly captures the claustrophobia present in a city like Mumbai and the varied kinds of people that inhabit the city. The film also depicts these characters in a non judgmental way and through the conversations, phone calls they make. Interestingly, we never come to know the names of their characters which only add to the audiences feeling like bystanders witnessing the actions of strangers around them.

There’s not much of a story that takes place yet the proceedings keep you engaged due to some interesting conversations that take place among these characters. The conversation between Huma Qureshi and the politician’s aide (Mayur Jadhav) when the latter tries to get some tricky information from Qureshi stands out. The awkward conversations made by Jadhav are hilarious and seem straight out of life. So do the conversations that take place between Sunil Barve and his wife. These scenes also show how well written dialogues can work wonders and keep one engaged despite an absence of a story.

A massive traffic jam on the highway brings the lives of these characters to a halt and forces them to re-examine their lives, actions and the people around them. It also makes us look at the other side of people and makes us recognize their existence as human beings who despite their flaws need to be acknowledged and accepted. It also asks for us to look at people with sensitivity and empathy which we often fail to do.

The film also resists the temptation of intertwining these stories which largely works in favour of the film. However, one does feel that a few stories deserved a better culmination such as that of Tisca Chopra, Shashank Bhende and his deaf and dumb kid. These however are minor quibbles in a largely good film. The film is also helped by a large number of good performances, especially by those of Mayur Jadhav, Girish Kulkarni, Mukta Barve, Sunil Barve and Renuka Shahane who still has an endearing and warm presence. One must also make a special mention of the opening titles which are well done and are one of the best in recent times.

It takes a while for the culmination of the film to settle down, but when it does it leaves you thoroughly pleased and satisfied. Those looking for a proper ending maybe disappointed with film and its ending. But good films grow over a period of time. And Highway, I believe is one such film despite its inconsistencies. As I write this, the film has already exited most of the theaters, but do give it a watch and you will enjoy it.