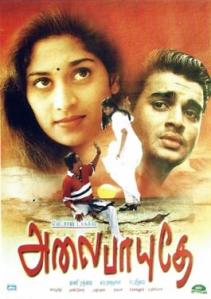 I vividly remember watching Bombay on VHS on my black and white TV, I was completely blown away that a Tamizh director could make a film about my city and address an important subject, the ’92 riots. All the more amazing that none of the Bollywood filmmakers till date apart from Anurag Kashyap (Black Friday) have made a film on Bombay riots.

I love the political side of Mani be it Roja, Iruvar or Dil Se. I was disappointed when Dil Se did not work at the box office, and Mani went back and made a romantic film. For me personally, it was frivolous because how can a filmmaker go from political subjects to this boy meets girl cute film. Finally yesterday as the film in question Alaipayuthey completed 20 years, I ended up watching it for the first time.

Like most of Mani Ratnam’s film this has aged well and it is a reminder of the fact that even an age-old love story can be treated and narrated in a way that it can touch our soul. Is Alaipauthey Mani’s best? The answer is no, but as an audience I enjoyed it while watching even after 20 years of its theatrical relase.

Well there have been a lot of reams written about the film, so I will talk about two scenes which stood out for me.  For a film which is a love story, we do not get to see the Shakthi (Shalini) say I love you till the end of the film.

When Karthik (R. Madhavan) says the three golden words to Shakthi for the first time, as a pragmatic person she asks him what does it mean. Look at the beauty of this dialogue, here Karthik is madly in love with her, we don’t know if it is infatuation or love. In real life also we don’t know. We sense that she is interested but she is also testing waters, she has a career in front of her, middle-class parents who have pinned hope on her.

This is a typical Indian phenomenon and rooted our culture. We don’t easily say I love you, even couples who are married for decades, I have noticed that they don’t say I love you. It is not that they are not madly in love but Indians or at least southeast Asian couples express love in a different way.

The next time, Karthik calls while she is on duty. This is a cute little scene where he says “ I love You”, those three little words. But for those who have fallen in love how the same words mean so differently when you are in love. When kissing a piece of the plastic telephone makes sense only to you.

Mani always places his couple in the middle of the crowd, here too we see Shakthi is surrounded by her senior doctors and nurses, her reply is that she knows that he loves her.

It is in the hospital bed when she is trying to fight for her life, that the inevitable happens. The camera closes into just both of them, in fact for a moment we only see Shakthi’s face, let us accept the fact no man is complete without his Shakthi.

It is a moment most of us have experienced or will do so in our lifetime when we transcend beyond words. It can be like crush or love or just two souls being for each other in the world.

Shakthi sees her Karthik and she just says  “ I love you” and Karthik in role reversal asks what does she mean by that. Look at the brilliance of Mani’s economical dialogue write she says she does not know, but she loves him.

Maybe that is the magic of love, we don’t know how to define it or articulate it but as Raftaar says “Hai shabd teen par shabd na ye aasaan se”

In this time of crisis I guess it is what art should do, comfort our discomforted souls and make us believe in love and longing.

The film is streaming on Amazon Prime with English subtitles.