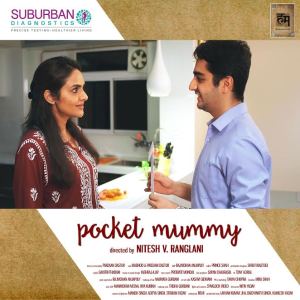 Pocket Mummy is a story about a single mother, and the bond between her and her son.

Pocket Mummy is Nitesh Ranglani’s directorial debut  and he says “Pocket Mummy is a very simple story, between a mother and a son, that everyone will relate to. I couldn’t have got anyone better than Madhoo Ma’am and Parzaan to play the parts. Madhoo Ma’am had earlier worked with my dad on Yeshwant and it’s a great feeling directing her today. Parzaan fits the character perfectly and both have done a wonderful job. Digital is a big medium today and we’re hoping to reach out to many with our labour of love”.

Actress Madhu said “I am very excited to work on this project. I’ve always been a very emotional person and I believe a lot in  connections. I have earlier worked with Mr Vijay Ranglani, he was the producer of my film Yeshwant with Nana Patekar and now his son Nitesh is directing me. It is a beautiful feeling to associate with them. Also I love being a mother and as a woman I have a lot of things to say and I’m sure this film will be adored and loved by all”
Here’s the film-