Before watching Doss Ramasamy’s Dora, I happened to watch the sneak peek of the film and I must say that it really helped me take the decision of going ahead and watching the film. I say this because for some strange reason there was a lot of negative feedback about the film right from its day of release. I was of course initially feeling let down, having expected to see a quality horror film on the lines of a Maya after watching the promos. Of course the comparison to Maya is thanks to the presence of Nayantara, the common factor between these 2 films apart from the genre. But what did the sneak peek show me? Pavalakkodi (Nayantara) and her father Vairakannu (Thambi Ramaiah) are at a used car dealer’s place, having decided to go in for a suitable car within their budget so that they can use it as a call taxi. 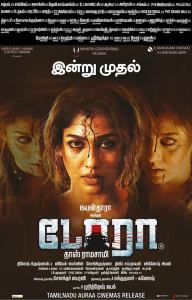 As soon as they enter the place, Pavalakkodi experiences a tremor of sorts in her heart. Later on when they have almost zeroed in upon a recent car, Pavalakkodi’s eyes fall upon a vintage Austin Cambridge car and she decides to buy it despite her dad’s apprehensions. With a fancy reason to support her decision, she goes ahead with the plan and they drive the car home. With just this one scene I somehow felt that this was perhaps fashioned as a good old B movie, whether the outcome has turned out to be exactly that or not was something that I was then keen to check out. Writer-director A.Sarkunam had turned producer with Manjapai (2014) and now Dora sees him return as producer, this time along with Hitesh Jhabak. Right from the time the film begins the intention of Doss Ramasamy becomes quite clear, it is a throwback to the revenge tales of the 80’s and 90’s, dealt in a contemporary fashion. More on that later, let’s quickly look at what Dora is all about.

In case you haven’t seen any of the promos and/or have been oblivious of the existence of this film then here I go. Pavalakkodi and her father Vairakannu are happy in their own space, except that Vairakannu now aspires to get her married off while she does not want to get married, preferring to continue living with her father instead. When her aunt insults them as they go to her asking for transportation to visit their family deity, Pavalakkodi throws a challenge by saying that she and her father would also enter the call taxi business and do better than her aunt and uncle in the field. This sees Pavalakkodi buy a vintage Austin Cambridge car and the father-daughter duo start the call taxi business. But they soon find that their plans are not really working out the way they expected. There is more to the car than what they imagined. What is the mystery about the car? What happens to Pavalakkodi and her father Vairakannu? And of course why is the film called Dora? We get the answers for all these and more as the film chugs along forward.

Doss Ramasamy seems to have been influenced by the straightforward revenge tales of the 80’s and 90’s. So here we have more than one element which reminds us of those films. Like there’s a haunted car to bring in the supernatural element, there is more than a hint of the divine force coming to the rescue and of course if these weren’t enough then there’s a dog that’s thirsting for the revenge. All these elements get utilised by Doss Ramasamy in a straightforward yet effective fashion. The contemporary touch to the proceedings are also captured well, take the example of the antagonists, for a change there is something really different about the antagonists in terms of their identity and that they aren’t playing the conventional bad guys seen in film after film. Imagine a cross between Stephen King’s Christine (1983) and Teri Meherbaniyan (1985) and the result would perhaps be Dora.

Also the film is very clear in communicating that it is an out and out Nayantara film. She is literally the “hero” of the film and I say this not because of her star power but also because of the manner in which she has been presented by Doss Ramasamy. In fact right through the film we do not miss the absence of a conventional hero thanks to Nayantara’s more than energetic portrayal of Pavalakkodi and the scope that the character is provided with. So when she is rejected by a suitor as a matrimonial prospect, she is more than livid. But the anger is not for having missed out on a suitable alliance but because she cannot stand being rejected by someone who did not even cast a glance at her properly. Her father tries to calm her down by saying that there’s no one quite like her in all of South India, sort of alluding to her popularity 🙂 . 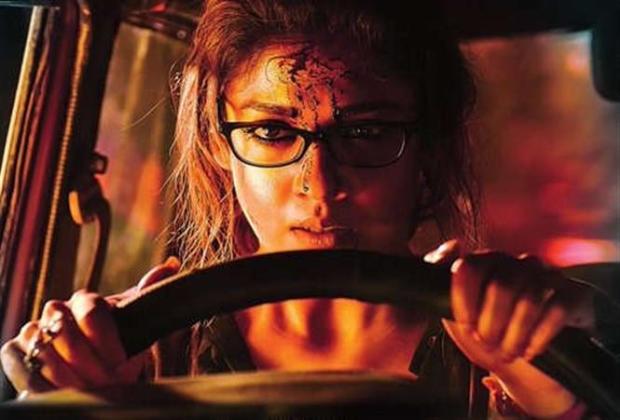 If this was not enough then there are specific “mass”moments that Pavalakkodi features in, including a few slow motion shots. There’s this particular shot where she not just walks but also catches a mobile phone in the air and that is a total paisa vasool moment for Nayantara fans and the tribe is constantly expanding for sure. While the film focuses on the revenge aspect it is quite a fun ride mostly, it’s with the comedy that the film goes slightly off-key. Thankfully the comedy scenes are only restricted to those which feature Thambi Ramaiah and there are not many of them in the second half. Dinesh Krishnan’s cinematography is more than adequate and the music by Vivek-Mervin suits the film quite well. It is good to see that there are no distractions like lip sync songs and a forced romantic angle for Pavalakkodi. In fact I kept dreading that something like that would happen, thankfully Doss Ramasamy steers clear of that angle completely.

Harish Uthaman continues to play an angry young man, thankfully this time he is not an evil cop. Thambi Ramaiah is a little irritating at places but as Vairakannu he does complement Nayantara’s confident yet slightly funny character of Pavalakkodi. As already mentioned Dora is a film that more than proves that Nayantara is a star in her own right. With that swag of hers that can put a lot of actors to shame, she virtually carries the film on her effective shoulders. Doss Ramasamy has churned up a fun B movie eventually, but mind you that this is definitely not something on the lines of Maya, not even close to it in fact. But if you are game for an energetic throwback to the good old 80’s/90’s revenge movies then do check out Dora.