For those spending hours online, watching YouTube series or liking sharing funny Facebook videos, Maanvi Gagroo needs no introduction. Most commonly identified as the best ideal girlfriend thanks to her stint in the immensely popular TVF series, Maanvi is also a popular name in the theatre circuit. In a freewheeling interview, she spoke her mind on internet content, her Australian-Indian project and of course, TVF. Read on-

From a Disney to theatre to India’s favorite girlfriend, to now being one of India’s first internet celebrities- how does it feel?

I often sit back and wonder how Shreya became so popular a character with the audience given that her screen time isn’t much. She’s there for only 3 scenes. And I’ve realized that the credit for that goes to first, Bisso for having written the character so well that even if the screen time is less, it’s memorable. Second, to Amit Golani, for treating it with the same importance. Unlike many Bollywood films where the treatment of the character is directly proportional to his or her screen time.

Theatre and on screen acting, you straddle both now. Is acting in front of a camera an extension of this actor in you, or is it also a move to sustain?

Unlike many actors, who move from theatre to camera, my story moved in the opposite direction. I started with camera acting and then started doing plays, more to keep myself busy and keep honing my acting skills. I feel theatre gives one a lot of confidence and allows one to brush up their art. My ideal career graph would be to do one film/web series and then a play and keep alternating like that.

Do you think content on the Internet content for the most part is misogynist, by men for men in its approach and ideology? Is it easier, tougher to forge a space for yourself as a woman, as an actor in the online space?

On the contrary, I think web is one space where you’ll find a lot of real characters. Again, I think TVF stuff has always been very real and relatable for that reason. You won’t find characters that can be categorised in one word like bubbly, negative etc. They’ve always shown real characters, men or women, unlike our saas bahu soaps where you’re a seedhi saadhi bahu if you wear Indian dresses and a vamp if you wear western clothes. So no, I don’t think TVF has done any misogynistic work and I guess I can say that for other web content as well.

How do you consider the reach of online content and a film different? If given the choice, would you rather do a movie?

Web content is still very new in our country/society so we’re all trying to figure it out as we go along. Of course, currently a film’s reach is far greater but web comes with a lot of advantages as well. Again, because online content is so real, the emphasis is more on actors than stars, characters than head turners and stories than item numbers. So yes I’d love to do more films with good content but I’d never say no to a web series with a good script. I’m greedy when it comes to challenging roles irrespective of the medium. 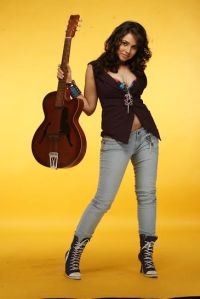 What genre do you enjoy the most as an actor? What would be your dream role?

I’m a sucker for drama and that is the genre I enjoy the most. The more nuanced the writing the better. My ideal role would be something that challenges me at every level, physically, mentally and emotionally. A character with a psychological disability maybe, I don’t know.

How did life change after TVF?

Life post TVF has changed manifold. Professionally people are taking me more seriously as an actor now. Personally as well I’m financially better off. It feels great to talk to fans and see what an impact Shreya and Pitchers has had on people. In addition to everything else I now have a family for myself in Bombay, my TVF family.

What are you working on next, what do we see you as next in?

I’m currently working on another web series with TVF. I can’t say much about it yet because we’re still under production but I can tell you its lots of fun and in a very endearing space. I’m also working on an Australian-Indian project. Then there are 2 of my plays that I’ll be traveling with. That’s all. More work is always welcome.

View all posts by ameetbhuvan