Actor Karanvir Malhotra who was loved for his performance in  Netflix’s coming-of-age cricket drama, Selection Day, will now be seen in Kabir Khan’s mini series The Forgotten Army- Azaadi Ke Liye which is streaming live on Amazon Prime. Karanvir plays the role of Amar- a young budding photo journalist working on a project for BBC. Amar’s character has been inspired by Kabir Khan’s experiences when he made his directorial debut with the documentary film ‘The Forgotten Army’ which realeased in 1999. Talking about being a part of such an impressive canvas, Karanvir said, “Getting a chance to be directed by Kabir Khan and work with such a talented cast and crew is definitely a career high. Technically, I first shot for The Forgotten Army and it was supposed to be my debut but Selection Day released first. I am glad I got an opportunity to work on two roles that are so different from each other, at just the start of my career. This project has ensured a sense of fulfillment. It’s overwhelming to receive so many messages and positive feedback from people who have watched the show.”

Born and raised in Delhi, Karanvir moved to Australia where he completed his education from La Trobe University, Melbourne. He later pursued theatre and performed at Melnourne Fringe Festival, the prestigious Adelaide Fringe Festival, Short+Sweet theatre festival. He even was a part of the Australian Shakespeare Company and performed for their production Romeo and Juliet.

The Forgotten Army – Azaadi Ke Liye, is based on the true story of Indian soldiers who marched towards the capital, with the war cry Challo Dilli, to free their country from the reign of the British. The series stars Sunny Kaushal, Sharvari, MK Raina, Karanvir Malhotra, Rohit Chaudhary, TJ Bhanu in significant roles. END_OF_DOCUMENT_TOKEN_TO_BE_REPLACED

Like Loading...
Dice Media, of Pocket Aces will soon come up with the Season 2 of its most popular web-series, What The Folks (WTF!!).

END_OF_DOCUMENT_TOKEN_TO_BE_REPLACED

Mumbai based production house Dancing Shiva, having forayed into the web space, have released country’s first transgeneder series called ‘Still About Section 377’ on their youtube channel. The first episode is live on their channel today and all 9 episodes will be available for viewing on OTT platform- SonyLiv (App) on 11th September 2018. END_OF_DOCUMENT_TOKEN_TO_BE_REPLACED

Ondraga Entertainment in a short span of time has become one of the leading YouTube channels in South India with over 150 million+ views and 250,000 subscribers, ever since it’s dream-debut with ‘Thalipogathey’.

This is a show about such weekend plans made by 4 bachelors who live together. Weekends with plans that come true, with plans that don’t have a plan, things that happen without a plan and of course plans that go terribly wrong. But the best weekends are those that just fly and cannot be remembered on a Monday morning. And irrespective of how the weekend goes, the next weekend has to have another plan.

This series is directed by Shammeer Sultan, co-directed by Arjun Krishna, Cinematography and Editing by Mathan Gunadeva. This team made the short film ‘Naan8’ which won many awards including the best film in Dada Saheb Phalke Film Festival and Behindwoods Gold Medal Awards.

The teaser of “Weekend Machan” was launched yesterday (10th September) by Director Gautham Vasudev Menon  on the Ondraga entertainment YouTube channel. The first episode of the series is expected in October.

END_OF_DOCUMENT_TOKEN_TO_BE_REPLACED

Office Vs Office is written by Amol Parashar, Tarun Singhal, Puneet Batra and Rohan Narula  and directed by Ashutosh Matela.

​Office vs Office is a comedy-drama​, tells the story of the Red Capers Co. and their employees ​ from two different worlds – corporate and creatives. It tries to find a balance between the maddening demands of the client and stumbling upon a crazy way which turned the world upside down. The web series revolves around 12 characters typical group of a office employees, where the workday consists of ego clashes, awkwardness and office cubicle gossip.

​The series has many actors and actresses known particularly for their improvisational work.

He has an impressive personality. He graduated from one of the IITs, the best engineering college in the country. He has founded his own company and loves his job and all his employees.

She is a go-getter in life and a no-nonsense person. She loves her job and is often at loggerheads with Hemant with regards to the company. She has always been alert to what was going on, and her comments are concise and to the point.​ 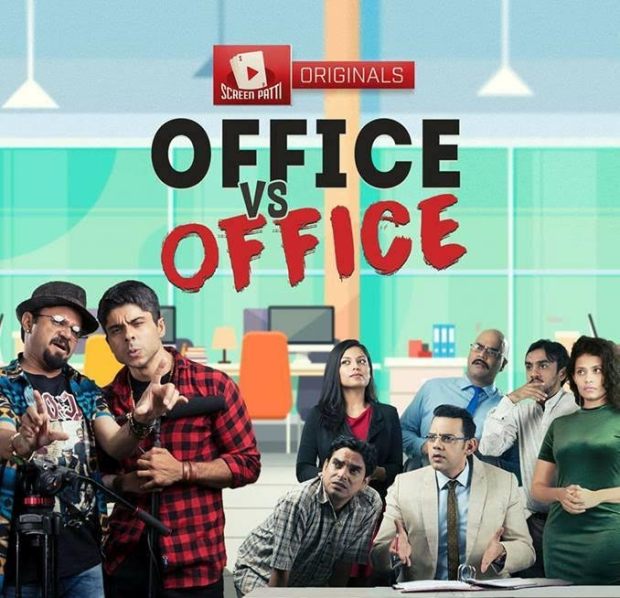 She is the pretty HR, who loves dressing up, and looks up to Shikha in terms of work. At work she basically ensures the smooth functioning of the company and is the glue that tries to hold the two different offices together.

He is a dreamer and a believer in following your passion. He dreams of his outfit becoming the biggest and the best production house in ‘Candid Photography & Videography’.

ScreenPatti is a 2 year old YouTube channel with more than 280K subscribers! It has garnered over 26.3 million views across its over 63 experimental parodies, spoofs, comedy/satire sketches. Out of these 6 videos have already crossed a million views and the other fifteen, about half a million views. ScreenPatti’s highlight has been the Superhero universe which was created with ‘ThatMan Begins’, a superhero with middle class powers and Scavengers(crossed 1.3 million views) where some of the Indian Superheroes like Shaktiman, Captain Vyom, Super Commando, Nagraj reunite to discuss their lost glory in the world of famous superheroes like Spiderman, Superman and Batman. All of these led by their genius mentor Chacha Choudhury. Other series like Dumbsmash, Bollywood Cricket Commentary, Leaked phone calls of Bollywood celebrities, Small Talk etc. will lead you to binge watch all the videos for sure.​