The original Guardians of the Galaxy was an absolutely fresh piece of entertainer from the Marvel stables that managed to win the audience by bringing together some of the biggest A-holes the cosmic universe could spit out. It was an obscure Marvel title that made global stars out of a raccoon and a tree for crying out loud. And, most importantly all this was achieved with a relatively new director, James Gunn, helming this vision. END_OF_DOCUMENT_TOKEN_TO_BE_REPLACED

Creed is helmed by a 29 year old & has a 28 year old playing the lead. By the time both of them were born, the Rocky franchise already had one great & three mediocre films! So, Ryan Coogler decided to give the audience yet another franchise film in an already crowded year (remember Jurassic World, Mad Max, Terminator?). With creed, he tries to make a film that will help the current generation of movie goers with a piece of history & a sense of nostalgia. END_OF_DOCUMENT_TOKEN_TO_BE_REPLACED

Movie buffs (including yours truly) who grew up watching Arnold Schwarzenegger, Sylvester Stallone and Bruce Willis amongst other stars had always wished for that one great action movie which would see all these stars in one single frame.  Sylvester Stallone knew this would be a great idea and he came up with The Expendables franchise – the ultimate action film one hoped for which saw Stallone, Schwarzenegger, Willis, Dolph Lundgren amongst a host of other action stars sharing screen space.  It also used the nostalgia trump card in its favour and gave the aforementioned stars (most of who by then were past their glory days at the box office) a chance for a comeback. The Expendables movies so far have had a common plot line – a group of mercenaries doing dirty jobs for CIA who take on a common villain and walk away in style after saving the day. END_OF_DOCUMENT_TOKEN_TO_BE_REPLACED

Jagan Deshmukh (Dilip Prabhvalkar) a highly respected elderly person, Sadanand Kulkarni (Hrishikesh Joshi) a respected school teacher and Arjun ( Aniket Vishwasrao) a hot tempered youngster are residents of Wadner village located in the district of Maharashtra. These people are living a peaceful life when the son in law to be of Jagan Deshmukh calls off the wedding with Jagan’s daughter. On the other hand Sadanand’s wife wants to file for a divorce and Arjun’s father in law to be (Uday Sabnis) refuses to let his daughter Kalpana (Pooja Sawant) get married to Arjun and thus these three people find their lives turned upside down all of a sudden. It soon turns out that the photos of these three men are accidentally printed on a Government ad promoting vasectomy and this has caused the turmoil in their lives and is responsible for them facing humiliation. Enraged by this, the three men set out to find the people responsible for this act and to set things right before it is too late. END_OF_DOCUMENT_TOKEN_TO_BE_REPLACED

The Movie Club, a movie screening initiative by Sony DADC, adds to the football frenzy by screening its third film‘Escape to Victory’’ on 6th July, 2014 at O15’s Cafe, Andheri (West). This Sylvester Stallone starrer is about Allied prisoners of war who are held captive in a German prison camp and their plan to escape during a football match with the German team. Fans can also catch the reel life action of football players like Pelé, Bobby Moore, John Wark and the likes.

Movie lovers can revel munching on their favourite delicacies and beverages, watch unseen footage of the movie and avail Flat 40% discount on DVDs. Movie buffs who sport their football jerseys at the screening also stand a chance to win exciting movie merchandise. END_OF_DOCUMENT_TOKEN_TO_BE_REPLACED

The Expendables are back once again with their 3rd installment, The Expendables 3. Simon West who had directed The Expendables 2 (2012) makes way for Patrick Hughes who takes over the directorial reins this time. The film sees the return of many prominent members from the earlier 2 films including Sylvester Stallone, Jason Statham, Dolph Lundgren, Jet Li and Arnold Schwarzenegger. The new members of the cast include Wesley Snipes, Antonio Banderas, Harrison Ford, Mel Gibson etc. Based on characters written by David Callaham, the story is by Sylvester Stallone while the screenplay is by Stallone, Creighton Rothenberger and Katrin Benedikt. END_OF_DOCUMENT_TOKEN_TO_BE_REPLACED

Remakes are always a ‘controversial’ lot, which never fail to sparkle some sort of debate every time they show up. You can love them or hate them, but you can’t totally kill them or ignore them. Sylvester Stallone once humorously quoted “The trouble with remakes is that people always fall in ‘blind’ love with the original. It’s like peanut butter. If you try to change the taste of the peanut butter, you are in trouble”. Well, as insightful as it may sound, it might not be as simple as that. Firstly “Why remake a film” at all? Well, must be for the ‘moolah’, what else?  Wow! Yeah, but any lofty purpose other than that? After some serious brainstorming, I could come up with these instances/purposes that warrant a remake. END_OF_DOCUMENT_TOKEN_TO_BE_REPLACED 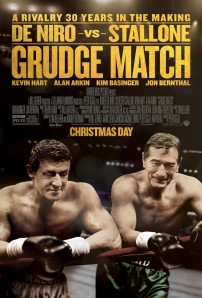 Director Peter Segal noted for films like 50 First Dates, Anger Management, The Longest Yard etc has attempted a sports comedy now with Grudge Match. In the process he brings iconic actors Robert De Niro and Sylvester Stallone together for only the second time ever (they had worked together in Copland earlier). END_OF_DOCUMENT_TOKEN_TO_BE_REPLACED