There has been a slew of biopics in Hindi cinema in the last few years, but most of them have been hagiographies. Biopics as a trend has not picked up in the southern cinema. Even when Bollywood has chosen a South Indian for a biopic, they have transported the protagonist to North India like Padman. Soorarai Pottru takes inspiration from the life of Captain Gopinath and his quest to start the no-frills airplane in India. END_OF_DOCUMENT_TOKEN_TO_BE_REPLACED

Jyothika’s latest starrer Ponmaghal Vandhal has been a much talked about movie in the recent weeks. Afterall, here is a A-lister tamil movie where the producer Suriya showed some spine going against the threats of exhibitors to bring a film directly to the streaming platform. Praiseworthy indeed but, on a closer look, one must admit that it also seems more of a smarter business choice.

Because truth be told Ponmaghal Vandhal, despite the stars associated, comes off like a TV movie rather than one aimed at the box office. This directorial feature from JJ Frederick is content in pushing the message strongly and this unfortunately comes at the cost of effective screenplay and story telling techniques. The end result is a well-intentioned, but an immensely preachy message driven movie.

The film opens in a misty Ooty setting where we see a witness’ visuals of a crime that takes place. A woman shooting down two men. The media and the police investigations dub her a psycho serial killer named Jothi, who has been targeting children in the vicinity. We are told about the case, the investigations, the witnesses and also the eventual death of the woman in police operations, all as the titles and credits roll out.

Cut to fifteen years later, where present day, we find a novice lawyer Venba (Joythika) deciding to reopen the case. Initial visual cues reveal itself that this is not just a mere publicity grabbing opportunity for this rookie lawyer, but something more personal and attached.

However, the reopening of the case is enough to get people around visibly concerned, most notable of that being a well-known businessman philanthropist, Vardharajan (Thiagrarajan) whose son happens to be one of the victims of this case. He is swift to rope in a hot shot lawyer Rajarathnam (Parthiban) into the case to avoid further damages to his repute.

What follows is Venba’s struggles to expose the truth behind the events of fifteen years ago.

Jyothika not only stars as Venba but also gets flash back portions where she portrays the lady ‘Jothi’. Though as Venba she fails to hit the right note, relying on a trademark smug or weepie face to get her across the line, she gets more scope to perform as Jothi, flexing her acting skills to more dramatic range. But the makers could have avoided that pointless star-entrance shot of hers on a bike – the constant snag in Tamil movies that keeps makers from unadulterated story telling. Even Frederick can’t hep but throw in nods by introducing veterans like Bhagyaraj and Prathap Pothen with their respective songs. However as much as it is a pleasure to watch them on screen, they along with Pandiarajan and Thyagarajan plays disappointingly one note characters.  Nowhere the kind of magic I expected when I heard the union of five directors in this ensemble cast.

Parthiban comes in as the rival lawyer and honestly, his brand of Parthiban-ism is what keep me engaged through the movie. But again at times even the makers ended up throwing too much star focus at times. Especially in a visually interesting investigation scene that incorporates the ‘time freeze’ shot. Though the scene is a reveal of a gruesome murder scene, the director ends up throwing attention on Parthiban’s presence than the importance or gravity of the situation.

Such odd choices make the direction inconsistent and some scenes play out rather silly or a little too in the face. Even the shot selections, especially where a sexual crime with a child is involved, should have been handled more sensitively. Frederick relies heaving on reaction cuts in many of the scenes to amplify the emotions because evidently the writing and the performances were not achieving the results.

Technically nothing much to write home about. Cinematography was overall good, but what really stood out was Govind Vasantha’s background score in some portions. He literally makes that violin of his convey that pain.

The intentions, as remarked earlier, are all good. No argument there. The makers here are indeed e focusing on the message rather than exploiting the message. To its credit, it never comes off as a mere star vehicle under the guise of socially relevant subject. There is no ‘The Great Father’ or a vigilante ‘Mom’ in here like we have been getting in the recent few years. This is much more focused on the victims and the survivors of sexual crimes.

But you really wish they would have worked harder to get the cinematic pulses right. As a court room drama, it keeps repeatedly falling on its face. As a thriller, it just fails to excite with twists that you can see from miles away.  Even the makers decide an unnecessary final twist to untwist the interval reveal, but it really does not help the cause much.

Years after cases of Nirbhaya and Asifa, sexual crimes in India are still on a rise. Victims are getting younger, and shockingly so are the perpetrator of such crimes. Certainly a relevant a topic that needs to be addressed, discussed. Therefore it is noteworthy that stars like Suriya and Joythika are stepping up to address these issues in mainstream media.  And, hopefully all the attention that the movie has generated in the OTT vs Exhibitors struggle will help in getting more eyeballs to this movie in these times of lockdown.

But if only we had a strong and powerful movie to go along with it. Unfortunately, Ponmaghal Vandhal is too predictable a fare and is a case of missed opportunity to make the kind of impression it needed to.

Like Loading...
2016 was an interesting year for Tamil Cinema with a variety of topics being explored. Some big films didn’t do well, while some small films made impact. Certain stars did well,while some of them didn’t really do well. Here are the films in my opinion which stood a little apart from the rest of the pack and made an impact this year.The movies aren’t sorted in any order of merit. Sorting is done based on release dates.

END_OF_DOCUMENT_TOKEN_TO_BE_REPLACED

In part 1 of our conversation with popular subtitling expert Rekhs we discussed a variety of topics including her journey into films and subtitling, the process involved, subtitling for songs, challenges involved etc. Here is Part 2, the concluding part of the freewheeling chat with Rekhs.

(You can check out Part 1 of the conversation here)  END_OF_DOCUMENT_TOKEN_TO_BE_REPLACED

Travelling into the past or the future, in short time travel is something that has always fascinated the human brain. For centuries together someone or the other has been trying various means to manage the same, even attempting to make their own version of a “time machine” or any such device to enable the same. While many theories abound on the feasibility and practical nature of time travel as a concept to develop and exist, nevertheless it’s also a phenomenon which has caught the fancy of filmmakers across the World, including India as they go about trying to exploit the concept through films. Be it Aditya 369, Love Story 2050 or even the recent Indu Netru Naalai, all of them have been attempts at making a true sci-fi film with time travel as the core concept. Vikram Kumar‘s 24 is one such addition to this list of films, this time around the stakes involved are higher as it features Suriya in the lead, an extremely popular actor from Tamil cinema, with a fan following all over South India. Considering that Suriya has gone on to produce the film himself the potential involved was also something that was appearing to be obvious. END_OF_DOCUMENT_TOKEN_TO_BE_REPLACED

At an emotionally charged up point in the movie, the protagonist meets his dear lover after a gap of about a year. The mood is almost set up, and the lead pair are supposed to emote to a bewitching background score. But exactly at this moment, a eleven-twelvish kid siting besides me in the theater (who perhaps must have seen a couple of romantic movies) shouts out aloud.  ”Ippa ava azhuva paaren*!”  I smile as I nod in approval. The kid goes on like “Ippa avan enna unmaiya love panriyaanu kepaan paaren!”. I am almost in splits nodding animatedly in a supposedly heart-wrenching scene.  And when he predicts “Ippa ava friend ivana vandhu adipaan paaren!, I pray to God not to let that happen, but the friend dude as if he had heard the kid nice and clear, comes up to get a beating from our protagonist. I can’t help but laugh out aloud. What should have probably been the strongest sequence of the movie falls flat and becomes mundane, because of some serious lack of innovation and freshness in writing. Well, you get the picture right? Predictability plagues Amarakaviyam worse than how plague plagued Surat. To be frank, this is perhaps the lesser of my worries in Jeeva Shankar’s Amarakaviyam. END_OF_DOCUMENT_TOKEN_TO_BE_REPLACED

A National holiday or festival is the ideal occasion for a big ticket film release. A potential blockbuster with a leading star who can draw in the crowds and make it work, irrespective of how good or bad the film would be, is more than often deemed to be that perfect festival or national holiday release. Over the years, such star vehicles or films have become an indispensable part of the lives of the movie goers. END_OF_DOCUMENT_TOKEN_TO_BE_REPLACED 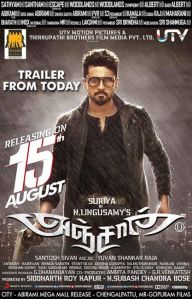 Anjaan marks the coming together of writer, director and producer N.Lingusamy and popular actor Suriya for the first time. Produced jointly by UTV and Thirrupathi Brothers, Anjaan is written by Lingusamy and Brinda Sarathy. The film features an ensemble star cast which apart from Suriya includes Samantha Ruth Prabhu, Manoj Bajpai, Vidyut Jamwal, Soori, Dalip Tahil, Asif Basra, Murli Sharma etc. Chitrangada Singh and Maryam Zakaria feature in item numbers as well. The music is by Yuvan Shankar Raja while Santosh Sivan is the DOP and Anthony is the editor. END_OF_DOCUMENT_TOKEN_TO_BE_REPLACED 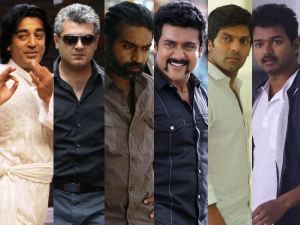 Its that time of the year when a new year has set in and we remember the year that just went past us. So its  time for the titles and awards again! Here is my list of the very best Tamil cinema had to offer in 2013. Do read up and let me know your comments. END_OF_DOCUMENT_TOKEN_TO_BE_REPLACED