Directed by J A Bayona 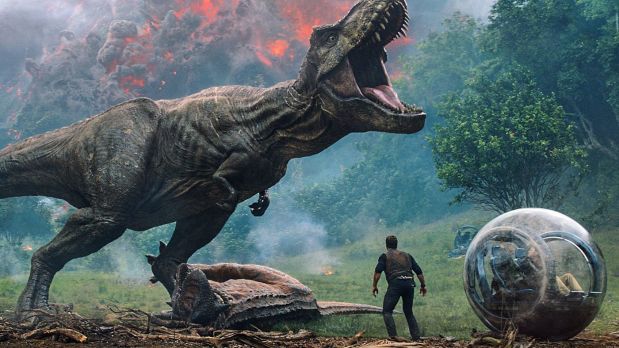 The park is gone! Now it is time to take your toys and play indoors!

That is exactly what the makers of Jurassic World seems to have done this time around., I kid you not!

With the park long abandoned, the writers have come up with the ridiculous idea to take the mighty prehistoric creatures and put them in a claustrophobic setting of a mansion to generate the thrills. Just an indication of how low the franchise has fallen with the latest installment, JURASSIC WORLD: Fallen Kingdom.

Evidently gone is the magic that one had with the original Jurassic Park movie twenty-five years ago, when Steven Spielberg gave us a big screen experience like no other. But now in this age of visual technology and CGI advancements, watching these beasts is certainly not all that bewildering as it once used to be. And so, the studio has now started treating this more on the lines of a horror series, plugging in the scares while the Universal studios laugh their way to the bank.

Not that it does not work. They successfully employed the trick with the reboot JURASSIC WORLD three years ago by creating a killing machine like the Indominus Rex and letting it loose in the theme park. Eventually the movie did prove everyone wrong and went on to be a massive global success that has now led us to this sequel. But unfortunately, this time the studio seems to have no idea where to take this franchise and instead it pops out a summer event movie that is nothing but a mere money-grab exercise.

Fallen Kingdom is watchable. But what worries is the obvious dearth of anything innovative or fresh. They do hint at a new ‘Planet of the Apes’ like direction right at the end buried under the mumbo-jumbo of the dangers of ‘Playing God’ voiced by good ol’ Jeff Goldblum, but the entire movie preceding is clearly not on the same page. 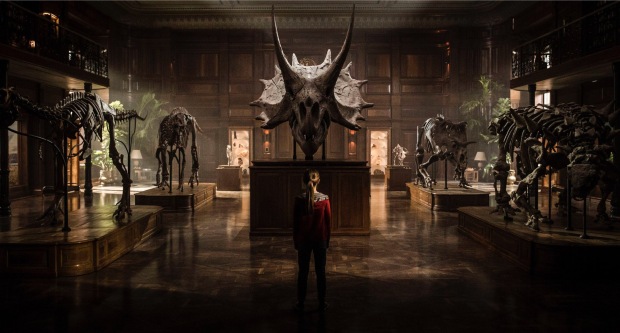 Movie is set three years after the events of Jurassic World and we find the famed Isla Nublar is facing a serious disaster threat with the active volcano on the island threatening to turn the entire island and its inhabitants to ashes. And outside, the world is debating whether the lab generated dinosaurs deserves to live. Despite the fights and protests of certain groups and activists, the authorities decide not to do anything about it.

At this juncture, former park manager and now dino activist, Claire (Howard) is called in by Benjamin Lockwood to his estate. Lockwood was John Hammond’s ex partner and is now interested in giving these creatures a new home. The operations are headed by Eli Mills who has formed a rescue team of mercenaries to assist Claire to get a select set of these dinosaurs. They are also very particular of getting Blue, the last living Velociraptor and Claire knows that is only possible with the aid of Owen Grady, the Velociraptor researcher who literally raised Blue.

It does not take much to convince Owen and before you know it the team is back on the island, however stupid they idea may seem.

Once on the island, and with Blue tracked down, the tables turn and Claire and Owen realize that it was a trap all along and the team was only capturing these dinosaurs to take it back to the Lockwood estate where Mills have already arranged to sell them at a black market auction.

Claire and Owen somehow do manage to escape from the island before it meets its ultimate doom. But now they must stop Mills from carrying out their plan, especially a new biological creation, the Indo-Raptor, a much more ferocious killing machine designed with the mix of the Velociraptor and the Indominus Rex, with ‘Blue’ being the key to breed a whole new gen of these violent beings. 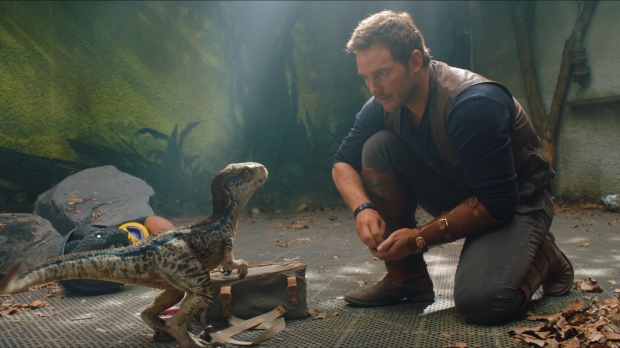 Much of the first half goes in the silly excuse of getting our lead cast onto the island and then have them escape from it. They must fight through mercenaries, dinosaurs, molten lava and extremely lazy writing to literally stay afloat. Things only kick into gear with the appearance of the new baddie on the block, the IndoRaptor offering some genuine thrills as we watch the imprudent advanced species scamper for cover.

The real tragedy of Jurassic World: Fallen Kingdom is how the CGI creatures have more personality and character than the live ones. The star of the piece is Blue the velociraptor who yet again comes to save the day and the franchise. The T-Rex still makes the obligatory appearance and makes a kill or two while the the highly intelligent IndoRaptor is a serious enough threat. Even the most affecting moment in the film is the long shot featuring a Brachiosaurus that is about to meet its end on the island.

But when it comes to the live actors, there is nothing worth highlighting.  Bryce Howard’s character does get that upgrade from the ‘damsel-in-heels’. But while Bryce have lost the controversial footwear from the earlier one, Pratt too seem to have lost all the charm and goofiness he had last time around. And two movies down, and still we see zero chemistry between the pair. At least nowhere close to what Pratt shares with his velociraptor. The new characters (Daniella Pineda, Justice Smith) also really do not bring anything memorable to the mix.

Director J.A. Bayona draws from his previous works like The Impossible and A Monster Calls. Unfortunately, while the entire first half is preposterously staged, he really comes to his own only in the second half when he gets to display his love for an atmospheric horror flick. However, one wishes the Spanish director brought more of it much earlier to the screenplay.

Visually the beasts have never looked better, but it is the writing or lack of it that is the downer.  There is a need for the franchise to evolve, but that for now is certainly not happening.

Jurassic World: Fallen Kingdom plays out just as one feared. All business and no heart. But it is no rocket science, the franchise will still live on…. irrespective of how lifeless these individual movies may prove to be!

It’s been a while since the Coen Brothers last film Inside Llewyn Davis was released. In this interim, they penned the script for Spielberg’s Bridge Of Spies and George Clooney’s forthcoming directorial venture Suburbicon. END_OF_DOCUMENT_TOKEN_TO_BE_REPLACED

When Jurassic Park released in the 90’s it took the global box office by storm and mesmerized the audience across the globe. Jurassic Park was the first Hollywood film which was dubbed in Hindi, and it reached a wide number of audiences across India. I remember watching it in a projection room inside the erstwhile Cine Aroma (now Sathya) theatre in Palakkad in Kerala with my father. If my memory serves me right it was my first Hollywood film on the big screen. Since then times have changed, now people do not get excited by just a few action set-pieces. In fact more people die on screen in summer blockbusters in the first 15 minutes, than in entire Jurassic Series films. I was somewhat disappointed by The Lost World, following which I have not even bothered to watch part 3 of the franchise. END_OF_DOCUMENT_TOKEN_TO_BE_REPLACED

Veteran filmmaker Steven Spielberg is back with his latest film Bridge of Spies which is written by Matt Charman and the Coen Brothers (Ethan and Coel).It is based on the 1960 U-2 incident, in which lawyer James B. Donovan (Tom Hanks) is thrust into the center of the Cold War when he is given a mission to negotiate the release of Francis Gary Powers, a pilot whose plane was shot down in the Soviet Union. Bridge of Spies will be releasing on October 16th Worldwide. END_OF_DOCUMENT_TOKEN_TO_BE_REPLACED

Plot: The Kadam family of restaurateurs (endearingly patriarched by Om Puri) moves to a little village in France  and set up shop right across the road (“it’s a hundred feet, we measured!”) from a single Michelin star-toting restaurant owned by the ‘rarely seen to be in sympathy with anyone’ Madame Mallory (Helen Mirren). Hijinks and romances ensue; really, use your imagination. Includes a nubile sous-chef (Charlotte Le Bon) who teaches the young Indian son (Manish Dayal) French cooking in the first steps of his ascent to glory (as defined by the third Michelin star). END_OF_DOCUMENT_TOKEN_TO_BE_REPLACED

I was ten when I saw Jurassic Park in a dingy cinema at Kolkata’s (then Calcutta) Dunlop market; in Hindi. Accompanied by my Massi, we kids grabbed on to our seats in exasperated wonderment as the Dinosaur magic unspooled on screen. END_OF_DOCUMENT_TOKEN_TO_BE_REPLACED

This year, there isn’t one single movie like Titanic that’s going to bulldoze itself through all categories in which it has been nominated. Putting your neck on the line by predicting winners in major categories is risky, yet I’ll do it here. In fact I would encourage others to do the same by using the comments section at the bottom. Then maybe we’ll exchange notes on February 25th. Each category also includes a name who would get an Oscar if I was the lone jury member. END_OF_DOCUMENT_TOKEN_TO_BE_REPLACED

The nominations for the 70th Golden Globe Awards were announced a short while ago. The presentation ceremony will be on 13th January, 2013. Steven Spielberg’s Lincoln leads the list by bagging 7 nominations, followed by Django Unchained and Argo with 5 each and Zero Dark Thirty with 4.  And Life of Pi has got 3 nominations.Given below is the complete list of nominees. So whom will you be rooting for? END_OF_DOCUMENT_TOKEN_TO_BE_REPLACED