If 2018 was a grim year for Kerala (with Sabarimala and floods dominating the mental and emotional space of people), 2019 has been quite a distressing year for the nation as a whole with the fervid protests rocking the public space across. At a time like this when the nation is going through a rather tumultuous churning phase, it is kind of awkward to pause the political scene and take a peep into the musical world of entertainment that has enthralled our spirits this year. But life must go on – governments will come and governments will go but the strains of music shall continue to touch our souls as all great art does…. END_OF_DOCUMENT_TOKEN_TO_BE_REPLACED

2018 was a year that a lot of folks in Kerala would want to forget. First you had one of the greatest floods of the century causing immense damage, quickly followed by the all-encompassing Sabarimala issue which kept all its denizens busy for most of the season. Maybe it is a reflection of the mood of the state for most of the year that this period did not provide too many cinematic works in the mainstream space that made an impact. Yes, there were exceptions like Ee Ma You, Sudani from Nigeria, Eeda and Poomaram but otherwise there was very little to write home about, despite a fantastic 2017. With mega biggies like Odiyan and Kayamkulam Kochunni creating more hype about the business done rather than artistic merit and falling short of pleasing either the audience or critics, we probably need Dileesh Pothan to make a film every year! END_OF_DOCUMENT_TOKEN_TO_BE_REPLACED

‘I’ or Ai as it was being referred to earlier is an acid test of a film for multiple reasons and it has been in the news ever since it was launched. The film brings back Shankar and actor Vikram together once again after their blockbuster Anniyan (2005). In my opinion Vikram hasn’t really had a good film after that (with films like Mani Ratnam’s Raavanan and A.L.Vijay’s Deiva Thirumagal being passable fare), hence what could be a better way to bounce back finally in style than associating with the same director who gave him such a big turning point in his career earlier. After working with Harris Jayaraj in his previous film Nanban, Shankar once again has fallen back on his trusted music composer A.R.Rahman for the soundtrack of ‘I’. Incidentally ‘I’ is the 12th film to be directed by Shankar of which ARR has composed the music for 10 of them (the other 2 films, Anniyan and Nanban being Harris Jayaraj compositions) and so the expectations were always going to be high. END_OF_DOCUMENT_TOKEN_TO_BE_REPLACED

Its that time of the year when a new year has set in and we remember the year that just went past us. So its  time for the titles and awards again! Here is my list of the very best Tamil cinema had to offer in 2013. Do read up and let me know your comments. END_OF_DOCUMENT_TOKEN_TO_BE_REPLACED

Alright, so we have Yash Chopra, AR Rahman, Gulzar and all the biggest names of bollywood coming together to make a film, where Yash Chopra himself has said earlier that songs are the highlights of his films. So expectations from the music surpass the expectations from the film automatically, at-least as far as I am concerned. Because I feel the hilariously schmaltzy Veer-Zaara and awkwardly cheesy Dil To Paagal Hai, doesn’t matter how poor those films were, still, featured astounding music. END_OF_DOCUMENT_TOKEN_TO_BE_REPLACED

There are very few songs which have been picturised so beautifully that you just end up staring at them with wide-eyes. You don’t mind even if the story is not going much ahead. You just want your eyes to devour the visuals unfolding. Jeev Rangala from Jogwa certainly does that to you. Based on a play called Phulwa, the film explores the life of the devdasis of the Yellama Cult in Karnataka. It is a romantic tale of Suli(Mukta Barve) and Tayappa(Upendra Limaye) who have both been forced into becoming devadasis due to social pressure and how they try to break free from the shackles that the society has bonded them to.

After you have seen the video of the song you will notice that the actors in the frame are dark with unattractive features. They definitely don’t make for a pretty couple as per conventional Indian norms. But still there is sensuality oozing from each frame of the song. I will also go on to say that this is easily one of the most sensuous songs I have ever seen in an Indian film. Mukta Barve and Upendra Limaye make you realize that to make a love-making scene work what you require is only a high caliber of acting skill, not much of anything else. I particularly love the way how Suli(Mukta Barve) locks lips with Tayappa(Upendra Limaye), without any inhibitions whatsoever. What also startled me was seeing that here it is the woman who is unbuttoning the ‘blouse’ of her man. Such sexual liberation of a female character is rarely seen in our cinema.

Sanjay Jadhav’s absolutely gorgeous camerawork goes a long long way in making the picturisation what it is. Right from the way he lights his characters in the very first shot of the song, to those kissing scenes in the balcony with the rain outside, to that breath-taking crane shot towards the end with the camera hovering over the couple resting in a hammock that is tied over the river. Sanjay Jadhav lets you know that he is one of the best cinematographers today in India.

The duet song sung expertly by the ever-amazing Hariharan and Shreya Ghosal and composed by Ajay-Atul is without doubt of very high quality. In one of those rare occasions, the song made all of them win a National Award which definitely speaks a lot about it.

Last but definitely not the least, director of the film Rajiv Patil should be heaped with a lot of praise for his vision of the song. He has excelled in bringing all three factors (music, acting and visuals) together to make for a video which will be remembered for many years to come.

Gautham Vasudev Menon (GVM from here on) and A.R.Rahman created history when they came together for the 1st time in Vinnaithaandi Varuvaaya/Ye Maaya Chesave. GVM earlier had always worked with Harris Jayaraj in the past until they parted mutually after Vaaranam Aayiram. With expectations reaching gigantic proportions from the combo of GVM and ARR it was heartening to note that the soundtrack of VTV hit the bull’s eye with accurate precision. VTV/YMC was Karthik and Jessie’s story and their story was only aided by the songs. So when the Hindi version was announced by GVM it was initially met with a lot of enthusiasm. But then for a long time the lead pair wasn’t really confirmed at all and at that time what helped to keep the spirits of people high was the fact the music would again come from ARR himself, with lyrics by Javed Akhtar. END_OF_DOCUMENT_TOKEN_TO_BE_REPLACED

With the Chikni-Chameli song getting popular(thanks to Katrina Kaif) composers Ajay-Atul have finally managed to get noticed in Bollywood. They have done work in Bollywood like Gayab, Singham & My Friend Pinto but this is probably the first time they have belt out a popular track which actually has the same tune as their Marathi song Kombadi Pallali. But they have been giving music in the Marathi film industry for quite a while now and have composed a number of good songs of wide variety. This post is not a review of their music, as my knowledge of music is pretty limited, but it is just an attempt to explore the music composed by them over the years which has made them hugely popular in Maharashtra. END_OF_DOCUMENT_TOKEN_TO_BE_REPLACED 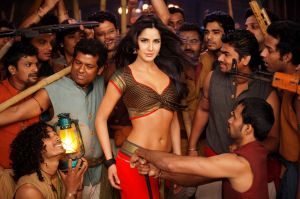 Music composer duo Ajay-Atul have been rocking Marathi Cinema in the recent past with hits like Aga Bai Arrecha,Jatra, Jogwa, Natarang etc and have recently made a transition to Hindi Cinema as well. The year 2011 has seen them churning out Hindi compositions in films like Singham and My Friend Pinto and now in 2012 they have Agneepath and Bol Bachchan to look forward to. Agneepath which is due for release on 26th January, 2012 has been in the news right from the time the project was launched. Adding to all the frenzy now is the item number picturised on Katrina Kaif – “Chikni Chameli” which has finally now been unveiled. END_OF_DOCUMENT_TOKEN_TO_BE_REPLACED