Deconstructing a genre can be tricky. Especially when it comes to a crowd-pleasing genre, like the standard rom-com. When you observe the trajectory of a typical rom-com, it seems simple, comforting, something you’d go for, on a lazy weekend after a hectic week, like a mug of chilled beer and a steaming plate of biryani. Therefore when 500 Days of Summer came along and ended up subverting most tropes we’ve come to expect, it was a hell of an experience and therefore ripe for adaptation in Bollywood. So when the promos of Meri Pyaari Bindu turned up, one did feel the spirit of 500 in it, so the question here would be if MPB is an apt deconstruction of the genre, or just another run of the mill boy meets girl tale? END_OF_DOCUMENT_TOKEN_TO_BE_REPLACED

Raju is a name synonymous with a simpleton who wants to make it big in the world, be it Raju from Raju Ban Gaya Gentleman or Raj from Awara. It is interesting that Raju in the film Wrong Side Raju wants to make it big not in Mumbai or Delhi, but in his own city of Ahmedabad. END_OF_DOCUMENT_TOKEN_TO_BE_REPLACED

Niren Bhatt, who shot to fame with his much applauded tv show, Tarak Mehta ka Ulta Chasma and his first Gujarati film,Bey Yaar, is all geared up for his second script coming to life on the silver screen – Wrong Side Raju.

Bhatt who is a postgraduate in MTech and an MBA, left the security of his corporate job to pursue his passion for writing. The love for writing was cultivated through the early days under his maternal uncle. Bhatt shares, “I started as early as writing musical plays for my school and college, which won various awards at the local, state and national levels for both the script and the songs. I also wrote songs with my uncle Vinay Dave, we soon became a lyricist jodi and came up with many Gujarati albums.” END_OF_DOCUMENT_TOKEN_TO_BE_REPLACED 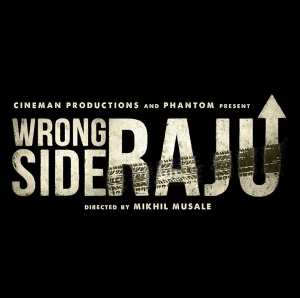 Wrong Side Raju  is a forthcoming Gujarati film directed by Mikhil Musale. The film is about a hit and run case.  Produced jointly by CineMan Productions and Phantom Films, this marks Phantom’s entry into Gujarati cinema. The film stars Pratik Gandhi, Asif Basra, Kavi Shastri, Hetal Puniwala, Kimberley Louisa McBeath. Written by Mikhil Musale, Niren Bhatt and Karan Vyas, the film has music by Sachin-Jigar. Tribhuvan Babu is the DOP while Cheragh Todiwala is the editor. END_OF_DOCUMENT_TOKEN_TO_BE_REPLACED

First things first. I don’t know why they have called the film ‘Jazbaa’. ‘Jazbaa’ roughly translates to ‘passion’ in English and I am not sure how the theme of passion fits the bill to be this film’s title. Are the makers hinting at the passion of a mother to save her child or is it about the passion to fight against a social evil like sexual harassment? Whatever be might the intent, it does not come out well at the end of the film. The only aspect of the film that showcases true passion is Sanjay Gupta’s weird obsession with green filters that makes at least half of the film look like a series of poorly-edited Instagram posts. More on that later. END_OF_DOCUMENT_TOKEN_TO_BE_REPLACED

There was a time, when Bollywood used to lift directly from Hollywood and in some cases, they used to copy paste entire scenes from Hollywood films. Times have changed; Hollywood studios are now making inroads into the Indian film industry.

Sanjay Gupta the inspired film maker, finally makes a film which is an official remake of a Korean thriller, Seven Days (2007). Let me tell you at the outset, I have not seen the Korean film so it would difficult for me to say how this has turned out compared to the original. END_OF_DOCUMENT_TOKEN_TO_BE_REPLACED

We are living in fluid flux ridden times, we Indians. We are. In almost every public sphere of life and existence, there is a decided shift against inheritance and for merit. Be it politics, business or even smaller work spaces, the idea of letting sons take over your mantle whether they deserve it or not is fast losing the social acceptance it enjoyed all these years. END_OF_DOCUMENT_TOKEN_TO_BE_REPLACED

Remo D’souza is a brave man. He mostly resists the temptation of going for ‘typical Bollywood’ choreography and dishes out some lovely psychedelic, hip-hop, Broadway and other western dance forms in ABCD 2, sequel to his 2013 hit ABCD (Any Body Can Dance). I am not an authority to comment on the quality and level of dancing, but as an average movie lover seated in the theater, much of the choreography in ABCD 2 gives you goosebumps. Your limbs twirl a little and a bit of shiver runs down your spine during several dance sequences in the film – especially during Prabhu Deva’s stunning introductory dance number and the exhilarating Ganesha formation towards the climax. More on that later. END_OF_DOCUMENT_TOKEN_TO_BE_REPLACED

This review contains spoilers. Tread lightly but do tread.

Sriram Raghavan’s “Badlapur” starts off looking like he has been watching too much of Haneke’s “Caché” or Hitchcock’s “Rope” and it very well might be the shot of the year or atleast the best opening sequence in an Indian film this year. If in “Rope”, Hitchcock opens the film with a shot from the window, the viewpoint of a man looking down at the street opposite him and in “Caché”, Haneke shows us the vantage point of a street camera, in “Badlapur” Sriram Raghavan goes one further and makes the street scene seem like we are bystanders. The long shot gathers the workings of an ordinary Pune morning where two men bring down the shutters of a building, a woman is buying flowers with her child in hand, a guy is selling his wares and a cop is on his beat. Traffic is moving along on MG Road, Pune. All the while, we feel like bystanders who might be waiting for the bus or drinking tea from the neighbourhood tea vendor’s stall. There’s action but the enormity of the scene doesn’t register, not until a woman, Misha(Yami Gautham), is jumped and her car is used as a getaway vehicle by two bank robbers, Laik(Nawzuddin Siddique) and Harman(Vinay Pathak). In both “Caché” and “Rope”, the scene is supposed to show us the character’s eye, asking us to identify with the setting but in “Badlapur”, the sudden burst of action takes us by surprise, draws us in and rather than tell, Sriram Raghavan implies that there is something extraordinary taking place. And so we have the posters and the censor certified title of Badlapur always telling us “Don’t miss the beginning”, because here is Sriram’s best scene and one of the most magical of opening scenes I’ve witnessed. It’s beautiful, riveting and pulsating. END_OF_DOCUMENT_TOKEN_TO_BE_REPLACED