With Har Har Byomkesh Arindam Sil also jumped into the Byomkesh Bakshi bandwagon (Anjan Dutta being the other filmmaker making Byomkesh movies regularly) and that proved to be a successful outing. After leaving a mark earlier this year as director with Eagoler Chokh, the follow up film to his previous hit, Ebar Shabor, Arindam is back with another Byomkesh film-Byomkesh Pawrbo. This is based on Sharadindu Bandyopadhyay‘s ‘Amriter Mrityu‘. The film sees Abir Chatterjee, Ritwick Chakraborty and Sohini Sarkar reprise their roles as Byomkesh Bakshi, Ajit Bandyopadhyay and Satyabati respectively. The rest of the star cast includes Sayantika Banerjee, Rudranil Ghosh, Sumanta Mukherjee, Subhashis Mukherjee, Rajatava Dutta, Koushik Sen, Supriyo Dutta, June Maliah, Padmanabha Dasgupta etc. END_OF_DOCUMENT_TOKEN_TO_BE_REPLACED

Pratim D.Gupta is a film journalist who turned filmmaker with the Bengali film Paanch Adhyay (2012) and made one of the segments of X: Past is Present,is now ready with his next film Shaheb Bibi Golaam. The film has had a protracted battle with the CBFC and finally got its certification a few weeks ago. Shaheb Bibi Golaam features Anjan Dutt, Swastika Mukherjee, Ritwick Chakraborty and Parno Mitra in the main roles.Produced by Firdausul Hasan and Prabol Mitra, the film has music by Anupam Roy while Gairik Sarkar is the DOP and Sanjib Dutta is the editor. END_OF_DOCUMENT_TOKEN_TO_BE_REPLACED

The jury described the film as “a seductive and mysterious tale of a violin player’s mundane life, and an interesting take on how chance encounters are almost predestined.”

The Violin Player is the story of one day in the life of a Bollywood session violinist who finds expression in an unlikely place. The day unfolds to reveal startling truths about music, art, life and survival.

The film marks the Hindi film debut of the Bengali actor Ritwick Chakraborty.

The film produced by Monalisa Mukherji under the banner of Little Lamb Films, has been picked up by Alpha Violet, one of France’s leading sales agents which marked their first ever Indian acquisition.

Synopsis of the Film END_OF_DOCUMENT_TOKEN_TO_BE_REPLACED

I sat through 3 minutes of clothes moving, being pushed by material newly hung. It didn’t take me long to figure out how the clothes were being moved or their placement, I was after all brought up by a woman very familiar with the indigenous ways of using nylon ropes and verandahs. I also knew that the clothes would dry and then be pulled back, in the same order by another person. The husband hangs them to dry, the wife takes them off from the clothesline. In the first few minutes of the movie, you expect this to happen.This is an experimental film, whose labour is visible, whose love is supposed to be poetic and surreal but it is so devoid of any character or plot conflict, the journey is 84 minutes of mundane, unbearable obviousness. The sun sets, fish scales are removed, cereals are transferred to boxes, tamarind powder sits proudly and there is a small cooking class that Masterchef would most likely complain about. END_OF_DOCUMENT_TOKEN_TO_BE_REPLACED

To find a piece of art house cinema in a mainstream cinema hall is astounding in our country obsessed with song dance and nothing more in the name of films. So to see Labour of Love listed in cinema halls this week is more than just a pleasant surprise.  A film that transcends languages and cultures, this almost one and half hour wordless film is perhaps the best you could watch in recent times. END_OF_DOCUMENT_TOKEN_TO_BE_REPLACED 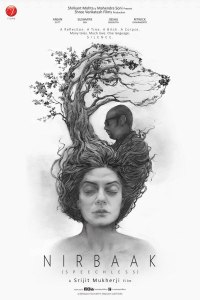 Srijit Mukherji is a prolific Bengali filmmaker, since his debut he has made a film every year, sometimes even two films in a year. He has been dabbling with various genres successfully, this time he brings us to Nirbaak (Speechless).

Nirbaak deals with the core emotion of love, can only humans love? What is love? Is possessiveness a trait of love? END_OF_DOCUMENT_TOKEN_TO_BE_REPLACED

National Award winning writer-director Srijit Mukherji is now ready with his latest Bengali film,Nirbaak (Speechless). The film was in the news from the time it was launched,being Sushmita Sen‘s 1st Bengali film. Produced by Shree Venkatesh Films, Nirbaak also features Anjan Dutt, Jisshu Sengupta and Ritwick Chakraborty. The music (BGM) is by Neel Dutt while Soumik Haldar is the DOP and Pronoy Dasgupta is the editor. END_OF_DOCUMENT_TOKEN_TO_BE_REPLACED