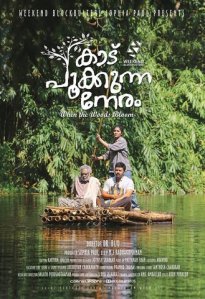 Dr.Biju continues to make films that he believes in and surprisingly manages to work with known actors as well. His latest Malayalam film Kaadu Pookkunna Neram (When the Woods Bloom) is another such example. Produced by Sophia Paul (who had earlier produced Bangalore Days along with Anwar Rasheed), the film features Indrajith Sukumaran and Rima Kallingal in the lead along with Prakash Bare, Indrans, Irshad etc. M.J.Radhakrishnan is the DOP while Santhosh Chandran is the music composer and Karthik Jogesh is the editor. Premiered earlier at the Montreal World Film Festival this year, it has also been selected for various other festivals Worldwide and is part of the Indian Panorama at IFFI-2016 (Goa) and the International Film Festival of Kerala (Thiruvananthapuram). END_OF_DOCUMENT_TOKEN_TO_BE_REPLACED

When I landed in Kerala recently for a short vacation I was a little disappointed that there was not a single film playing in theatres which I hadn’t watched before. That was when I realized that extending my vacation by a few more days made sense as May 1st would see the release of Kamal Haasan’s Uttama Villain along with 3 Malayalam films, Chandrettan Evideya, Chirakodinja Kinavukal and She Taxi. All the 3 Malayalam films looked promising for various reasons. Sidharth Bharathan who had earlier remade one of his own father’s films Nidra (both the original and the remake carry the same title) was now attempting a family entertainer with Chandrettan Evideya featuring Dileep in the lead. Now Dileep hasn’t really been working on good films of late and the trailer and the songs from Chandrettan Evideya indicated that his search for a good film could end over here. END_OF_DOCUMENT_TOKEN_TO_BE_REPLACED

Prolific Malayalam filmmaker Lal Jose teams up with Dileep for the 7th time in his forthcoming film Ezhu Sundara Rathrikal (7 Beautiful Nights). The film also marks the collaboration for the 2nd time between Lal Jose and the writer James Albert (they had worked on the blockbuster Classmates previously). END_OF_DOCUMENT_TOKEN_TO_BE_REPLACED

Rajesh Nair made his entry into filmmaking with the Malayalam film Annum Innum Ennum earlier this year and now he is back with his second film, Escape from Uganada. END_OF_DOCUMENT_TOKEN_TO_BE_REPLACED

Writer-director Aneesh Anwar has come up with what looks like an interesting concept for a Malayalam film in the form of Zachariyayude Garbhinikal (Zacharia’s pregnant woman). Produced by Sandra Thomas and her father Thomas Joseph Pattathanam, the film is written by Aneesh Anwar along with Nizam.  END_OF_DOCUMENT_TOKEN_TO_BE_REPLACED

The Kerala State Film Awards 2013 have been announced (for films released/certified in 2012) a short while ago by the Kerala Minister for Sports and Cinema, B.Ganesh Kumar. Films like Celluloid and Ayalum Njanum Thammil were among the major winners. Given below is the complete list of awards and the respective winners. END_OF_DOCUMENT_TOKEN_TO_BE_REPLACED

By now anyone who’s been following Malayalam Cinema reasonably enough is aware of filmmaker V.K.Prakash’s proficiency. A prolific ad filmmaker who started off his feature film innings in a not so remarkable fashion initially, it’s only in the recent 2-3 years that he has really found his true space in Malayalam Cinema. END_OF_DOCUMENT_TOKEN_TO_BE_REPLACED

V.K.Prakash is one of the more prolific filmmakers in the Malayalam film industry these days,quite impressive considering that he’s also an active ad filmmaker. While his films like Beautiful and Trivandrum Lodge got noticed and did well commercially and Karmayogi was more of an art house film, his last film, Poppins (remake of his own Kannada film-Aidu Ondla Aidu) turned out to be a disaster. END_OF_DOCUMENT_TOKEN_TO_BE_REPLACED

Kammath & Kammath is a forthcoming Malayalam comedy film with Mammootty and Dileep in the lead. Written by Udaykrishna-Siby K.Thomas who are known for their loud, commercial films which mostly have done well at the box office, the film is directed by Thomson K.Thomas. Produced by Anto Joseph, the film has music by M.Jayachandran while Anil Nair is the DOP and Mahesh Narayanan the editor. The film also has Rima Kallingal, Karthika Nair, Narain, Baburaj etc in the star cast. END_OF_DOCUMENT_TOKEN_TO_BE_REPLACED