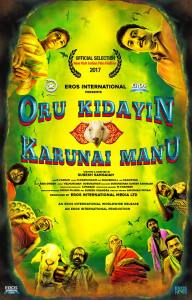 Oru Kidayin Karunai Manu (A Goat’s Mercy Petition) is a forthcoming Tamil drama film, written and directed by Suresh Sangaiah. The film features Vidharth and Raveena Ravi in the lead roles, with a goat playing a pivotal role. Produced by Eros International the film has music by R.Raghuram while R.V.Saran is the DOP and Praveen K.L is the editor. A village tale based in the interior of Tamil Nadu, the film is an official selection at the ongoing New York Indian Film Festival.  END_OF_DOCUMENT_TOKEN_TO_BE_REPLACED