As part of the 360-degree initiative, NFDC collaborates with 92.7 Big FM for a weekly radio show named, ‘Film Aaj Kal’ on Cinema Education and Awareness program which has the filmmakers discussing about the classics, bringing these films back to the fore. END_OF_DOCUMENT_TOKEN_TO_BE_REPLACED 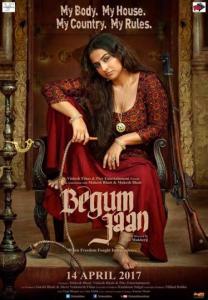 Partition and Prostitution are two plot devices that can ensure a hard hitting cinematic experience if handled with restraint, and end up making a mockery of human tragedy and resilience, if handled without finesse. Therefore, when the promos of Begum Jaan showed up, one ended up being intrigued. A tale set during the partition involving women of the night promised to be a tantalizing premise. And when it is a massive cast headed by Vidya Balan in a never before avatar, one does walk into the theatre with high expectations. So does Begum possess enough Jaan to hook the viewers? END_OF_DOCUMENT_TOKEN_TO_BE_REPLACED

There is always a sense of trepidation when one hears about an upcoming Bollywood remake of a successful South Indian film. After watching filmmakers slaughter their movies with indifferently made remakes (AR Murugadoss being the chief offender here with the godawful Holiday, with Prabhu Deva, Krishna Vamsi, Gautham Menon, etc. propping up the list from the bottom), one didn’t know what to make of the announcement that Shaad Ali planned to remake Mani Ratnam’s sublime OK Kanmani. While Ali’s remake of the brilliant Alaipayuthey made for a solid directorial debut in Saathiya, his last two directorial efforts, Jhoom Barabar Jhoom and Kill Dil ended up being examples of interesting ideas that somehow fizzled out on the big screen. So, will the audience say Jaanu or stick to Kanmani after watching this? END_OF_DOCUMENT_TOKEN_TO_BE_REPLACED

Two strangers meeting in a hospital waiting for their beloved partners who are in a comatose state, is a perfect subject material for melancholy with a capital M inscribed all over it. But director Anu Menon’s tragically witty, humorous take on grief and desolation ‘Waiting’ is strangely uplifting and philosophical, without at once being pedantic or languorous. Beautifully described by a critic as a cross between ‘Lost in Translation’ and ‘The Descendants’, it is refreshingly restrained (a bit more restrained than maybe what it should have been). END_OF_DOCUMENT_TOKEN_TO_BE_REPLACED

“This is your grief, Tara. Your’s alone” says Shiv Kumar as Tara tries to come to grips with the lemons that life has thrown at her. This line seems to underline the film, where 2 strangers wait for their partners hospitalised in coma, and have no one but themselves and each other to turn to. Waiting is a subtle tale of loss, played beautifully with pathos and the odd smattering of hope by Naseeruddin Shah and Kalki Koechlin as they come together after 5 years since That Girl in Yellow Boots. END_OF_DOCUMENT_TOKEN_TO_BE_REPLACED

Anu Menon who has made films like London, Paris, New York and X: Past is Present (one of the 11 directors on board) is now back with her latest film, Waiting that’s produced by Priti Gupta and Manish Mundra under the banner of Ishka Films and Drishyam Films. The film stars Naseeruddin Shah and Kalki Koechlin in lead roles, with Rajat Kapoor, Suhasini Maniratnam and Arjun Mathur playing supporting roles. END_OF_DOCUMENT_TOKEN_TO_BE_REPLACED

Himesh Bhai is back! And so am I, with my review of his latest offering Teraa Surroor. Yes, the Suroors don’t end, they keep coming back to please your senses, if I may say so. Just when you think you would be done with them, there is one more Surroor waiting for you. No, I understand that keeping films with similar names to famous songs, does impart it quite a bit of recognition in fleeting memory of the audiences. But my question is, how many times can you do that? What is a good number of times for Surroors to stop? Because the problem remains the same. HR Musik may have Himesh’s soothing music and T-Series’ unlimited cash flow for the sake of good old times shown to them by the former, but how many movies does it take for one to understand the complete scarcity of any acting charisma in one’s own self? Jacky Bhagnani seems to be on a break after 6, but Himesh Bhai is going strong at 8 with another release lined up this year. Much to everyone’s surprise, most of those on the list have been able to recover or make money. So why not Teraa Surroor?

END_OF_DOCUMENT_TOKEN_TO_BE_REPLACED

Phir Zindagi, a short film about how organ donation has the potential of changing lives, has been released online. It has been written and directed by the acclaimed duo Sumitra Bhave and Sunil Sukhtankar.

It stars stalwarts like Naseeruddin Shah, Vikram Gokhale, Ratna Pathak Shah among others.

Do let us know what you think about the film.

END_OF_DOCUMENT_TOKEN_TO_BE_REPLACED

Sumitra Bhave, who ventured into filmmaking more from circumstances than choice after the positive responsive to her short film ‘Bai’, is back to making a short film called ‘Phir Zindagi’ with her co-director Sunil Sukhtankar.

It is the story of how organ donation has the potential of changing lives. It also sheds light on the complicated and emotionally charged process of organ donation.

The short film has many veteran actors like Naseeruddin Shah, Ratna Pathak Shah, Vikram Gokhale and Neeraj Kabi among others. It has been produced by ZTCC foundation and written and directed by Bhave-Sukhtankar.

The film will release online on the 5th of December.