Let me begin by honestly admitting that 2016 was a lukewarm year for Indian Cinema, at least that would be something that I firmly believe in. Be it Bollywood/Hindi cinema or any of the regional language film industries, things were largely subdued for a major part of the year. Be it businesswise or with respect to the quality of output, 2016 definitely seemed to lag behind 2015, forget going anywhere beyond that for a comparison. It’s not that the year was totally beyond redemption, there were some positives as well, but they were not sufficient enough to completely lift up the spirit of Indian cinema overall. Let’s begin by taking a look at Bollywood to start with. 2016 saw only 2 big blockbusters, Sultan and Dangal, none of the other successful films were runaway hits as such. So while Salman Khan and Aamir Khan delivered big time with Sultan and Dangal respectively, SRK came up with Fan which met with a mixed response, while gaining back some traction with one of the better Hindi films of the year, Dear Zindagi. END_OF_DOCUMENT_TOKEN_TO_BE_REPLACED

Like Loading...
2016 was an interesting year for Tamil Cinema with a variety of topics being explored. Some big films didn’t do well, while some small films made impact. Certain stars did well,while some of them didn’t really do well. Here are the films in my opinion which stood a little apart from the rest of the pack and made an impact this year.The movies aren’t sorted in any order of merit. Sorting is done based on release dates.

END_OF_DOCUMENT_TOKEN_TO_BE_REPLACED

Of late Marathi cinema seems to have taken a big liking towards remaking films from the South and all kinds of films across genres are being attempted with an idea of striking it big in Marathi as well. For every Classmates (remake of the Malayalam blockbuster Classmates) which is a success there are also films like Vrundavan (remake of the Telugu hit Brindavanam) and Shutter (remake of the critically acclaimed Malayalam movie by the same name) which didn’t really hit the bulls eye. So when I first heard of Samit Kakkad’s attempt at remaking Kaakka Muttai in Marathi, I was a little sceptical to be honest. It wasn’t that I did not believe in Samit’s intentions, but considering that Kaakka Muttai has been one of the best Tamil/Indian films in recent times, winning critical acclaim as well achieving commercial success, repeating the act in Marathi looked difficult to me. A chat with Samit when the first look poster of Half Ticket was unveiled did give me some hope for sure. END_OF_DOCUMENT_TOKEN_TO_BE_REPLACED 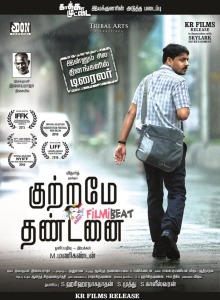 M.Manikandan who made a smashing debut with Kaakka Muttai last year is now in the news for his second film, Kuttrame Thandanai which is due for release shortly. Produced by S. Harihara Narayanan, S. Muthu and S. Kaleeswaran, the film is written by Manikandan and Anand Annamalai. Featuring Vidharth in the lead, the rest of the star cast includes Aishwarya Rajesh, Pooja Devariya, Rahman, Nassar etc. The cinematography is by Manikandan himself while the editing is by Anucharan and the music is by maestro Ilaiyaraaja. A thriller, Kuttrame Thandanai has been doing the festival rounds and its certainly a film that is way too different from Kaakka Muttai. END_OF_DOCUMENT_TOKEN_TO_BE_REPLACED

Last year saw some really interesting films across India being made by debutant directors and M.Manikandan‘s Kaakka Muttai in Tamil certainly is one of the important films in that list. Winner of 2 National Awards and popular in the festival circuit as well, the film produced by Dhanush and Vetrimaaran also went on to do well commercially as well. Kaakka Muttai is a good example of the fact that award winning, critically acclaimed films can be entertaining as well. Samit Kakkad, producer of Marathi films like Huppa Huiyya (2010) and Aayna Ka Bayna (2012), turned director as well with Aayna Ka Bayna. He is now making Half Ticket, the official Marathi remake of Kaakka Muttai. The film is being produced by popular Marathi production house, Video Palace.   END_OF_DOCUMENT_TOKEN_TO_BE_REPLACED

2015 has been an interesting year overall for Indian Cinema, there have been a lot of films across languages which appealed to both the audience and critics alike. Writers and filmmakers seem to have shown their willingness to explore a variety of topics, often surprising people in the process. As for Hindi Cinema it was a decent if not an excellent year and there were quite a few interesting developments observed. There were some good Hindi films in the first half of 2015 including Baby, Badlapur, Dum Lagake Haisha, NH10, Piku, Tanu Weds Manu Returns etc. This clearly indicated that variety was key and that even a big star like Akshay Kumar was keen to try out meaningful films within the commercial boundary. The third quarter of the year was dominated by two biggies, Baahubali and Bajrangi Bhaijaan, while thankfully a relatively smaller film like Masaan also got noticed. Baahubali’s success in Hindi is unprecedented, as no dubbed film has performed anywhere close to how Baahubali has performed in Hindi. It will be interesting to see if this remains an exception to the norm or whether there will be more such films to follow. The last quarter of the year saw some interesting films like Talvar, Titli and Bajirao Mastani, while the success of Pyaar Ka Punchnama 2 took everyone by surprise. SRK showed that he definitely is good at marketing, but that alone can’t change the quality of a film like Dilwale. Sooraj Barjatya returned after a long hiatus with Prem Ratan Dhan Payo, which despite having Salman Khan in a dual role, didn’t do as well as expected. END_OF_DOCUMENT_TOKEN_TO_BE_REPLACED

Have you ever aspired for something that excited you a lot and despaired of later when you realized it’s out of your reach? For someone it could be a chance to study in that prestigious place overseas, for someone else it could be a dream automobile, for someone else it could be that wonderful villa and so on. But can you feel for and empathise with someone who’s ‘lofty’ aspiration could be something as simple (as we perceive) as owning a pair of sneakers or dining at a fancy restaurant? No I am not getting philosophical on a weekday, far from it. But after watching the much appreciated and feted Tamil film twice that’s now the toast of the Country, M.Manikandan’s Kaakka Muttai (Crow’s Egg), I am feeling an odd sense of happiness combined with anxiety, happiness at seeing such a lovely tale unfold on screen and anxiety on realizing how at times we just tend to ignore so many small things in life. END_OF_DOCUMENT_TOKEN_TO_BE_REPLACED