I remember watching Fandry in a packed theatre and the audience laughing at the character and his mishaps, but then came the gut-wrenching climax and the audience went numb because it exposed them. I cannot remember such a stunning silence after a movie, here I thought was a director who has failed but then he has done a much bigger job as he had shown us the mirror.

END_OF_DOCUMENT_TOKEN_TO_BE_REPLACED 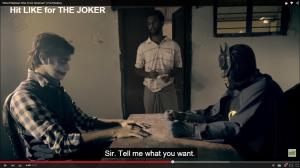 Put Chutney which claims to be all about “South Side Stories” unveiled their first offering earlier this week. Cheekily titled “What if Batman Was From Chennai”, this short film is exactly what the title claims-a quirky way of looking at the World in & around Batman assuming he was from Chennai. Based on a meme created by writer Balakumaran, this video is directed by Tushar Ramakrishnan. Featuring a host of actors, some of them popular in Chennai’s film, theatre and stand-up comedy circuits (including veteran Delhi Ganesh), this is one rib tickler of a video. No wonder that it has quickly gained popularity in the couple of days since it went online. END_OF_DOCUMENT_TOKEN_TO_BE_REPLACED