What is truth but a perspective that’s spoken more clearly than another? When the journalist Regina(Sheetal) tells that she intends to write a series about an incident considering all perspectives, we realise that Rakshit Shetty‘s debut feature as director, “Ulidavuru Kandanthe”, is going to tackle Rashomon effect, Ever since Akira Kurosawa gave the world the stellar masterpiece, Rashomon, there has been numerous attempts to reuse the effect and tell a story. Rakshit Shetty joins that crowd of filmmakers with his Ulidavaru Kandanthe and unlike most, he actually manages to deliver a good instance of the Rashomon effect. END_OF_DOCUMENT_TOKEN_TO_BE_REPLACED 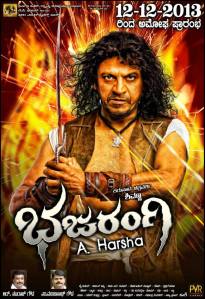 Amongst the southern language films, almost every other prominent Telugu , Tamil and Malayalam has been finding a release in Mumbai over the last decade or so. Moreover with the advent of multiplexes in areas where there is a large number of South Indians residing in nearby areas, the demand for the release of these films has only increased over the years in Mumbai.

It is therefore really baffling that over the last few years Kannada films are rarely getting released here.  Given the fact there is relatively large number of Kannada speaking people who reside in Mumbai.

One exception however in recent times was the release of the Kannada crowdfunded film Lucia which was released by PVR Cinemas – under their Director’s rare initiative.  Now as a part of the same initiative, yet another Kannada film makes it way to the select cinema halls of Mumbai. The film in question is the latest Kannada film Bhajarangi starring Shivrajkumar .

However the release of this film as a part of Director’s Rare by PVR Cinema comes as a surprise. Since Bhajarangi is essentially a mainstream film with one of the leading actors of Kannada cinema playing the lead role.  It would have anyways made sense to give the film a rather wider and larger release especially when you are keen to get the film released film in Mumbai and other states of India. END_OF_DOCUMENT_TOKEN_TO_BE_REPLACED

Innuendo is a forthcoming indie feature film in English ( with a smattering of Kannada, Tamil and Hindi ) and it is the brainchild of Arvind Kamath, the writer,director and producer of the film. Arvind is an I.T professional who went on to quit his regular job and follow his passion i.e to get into movies. Starting by making numerous short films he has finally graduated to feature films with Innuendo. With a run time of around 120 odd minutes and shot in the digital format, this is a film made with complete collaborative effort. END_OF_DOCUMENT_TOKEN_TO_BE_REPLACED