The men who share a camaraderie in the apartment complex have all gathered for their daily round of drinks on the rooftop (after all the days of the regular bars in Kerala is now history) and Ulahanan (Mohanlal) is pissed off because he realized that the chapter of the lady who was enticing him over the last few days is now a closed one. Irritated and angry at the same time, he forces his neighbour and friend Venukuttan (Anoop Menon) to make him speak with one of his numerous girlfriends over phone right then. Though initially unwilling, Venukuttan does go on to dial someone on his mobile phone eventually and gives the phone to Ulahanan without revealing the name of the lady. Ulahanan goes on to speak to the person over the phone, only to realize that he has been tricked by Venukuttan, as the person on the other end is none other than his wife, Annyamma (Meena). This is just one of various wonderful moments from Jibu Jacob’s Munthirivallikal Thalirkkumbol, which has finally hit the theatres after a delay due to the film industry strike in Kerala. END_OF_DOCUMENT_TOKEN_TO_BE_REPLACED

I’ve always wondered how it would be to roam around carefree impulsively and to listen to the call of my heart. Added with the prospect of living life on one’s own terms, it’s made me wonder how if not for the typical societal norms and the compulsions of having some semblance of stability in life, a lot many more people would be thinking like me. Normally one tends to look down upon the select few lucky people who manage to do this, even going to the extent of calling them escapists. But what if they could afford to do so, or couldn’t care less about how the World perceived them? Oh! How I would cringe every time a certain elder would try to caution me saying, look you can’t be living bindaas anymore, you need to get more responsible. And how happy do I feel now that the tides have changed and that I don’t have to listen to that comment from that person anymore. Having seen Martin Prakkat’s Charlie I can’t but help think along these lines. END_OF_DOCUMENT_TOKEN_TO_BE_REPLACED

As a kid I grew up listening to tales of people living in the Gulf countries,apparently making a lot of money and keeping their family members and friends happy. It would be tempting to see friends bringing in new toys or goodies whenever their father or uncle came back on a holiday, often making me even wonder why my father never even wanted to make his fortune over there :). But being interested in films even as a child, I remember watching films like Ee Naadu (1982) and Akkare (1984) which presented a slightly different tale of people associated with the Gulf in some way or the other. Nevertheless seeing Malayalam films those days on VHS cassettes from the Gulf while the film was very much in theatres those days was quite a kick in itself, making one feel good all the more about people working there, and feeling a tad envious of people benefiting from them as well :).  It didn’t take me much time to realize that not everyone working in the Gulf countries is a millionaire, nor is everyone a lowly worker, fighting for their basic survival itself. END_OF_DOCUMENT_TOKEN_TO_BE_REPLACED 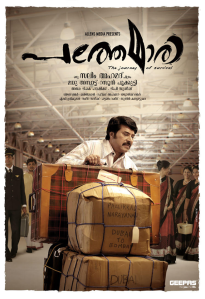 Salim Ahamed,the writer-director of the multiple National Award winning Malayalam film,Adaminte Makan Abu (2011) went on to collaborate with Mammootty in his second film Kunjananthante Kada (2013) which did not receive the same kind of acceptance as his first film. Nevertheless now he is ready with his next film, Pathemari which once again features Mammootty in the lead. Produced by T.K.Hashik and T.P.Sudheesh,both Kannur natives like Salim Ahamed, they probably connected with the plot of the film,having worked in the Gulf themselves. Pathemari talks about the Malayalee exodus to the Gulf countries over the last 50 years or so and apart from Mammootty the film also features Jewel Mary, Sreenivasan, Joy Mathew, Siddique, Shaheen Siddique etc. END_OF_DOCUMENT_TOKEN_TO_BE_REPLACED

Director Joshiy and superstar Mohanlal have worked together on various films over the years, some of them being memorable and still remembered. In recent times they have given us the popular thriller Run Baby Run (2012) and also a dud like Lokpal (2013). Co-incidentally Joshiy’s last 3 films including Lokpal have all been commercial disasters (the other 2 films being Salaam Kashmir-2013 and Avatharam-2014). With his latest film Lailaa O Lailaa bringing back the Run Baby Run pair of Mohanlal and Amala Paul once again, people hoped that it would emulate the success of the earlier film and not end up as a dud like Lokpal. Lailaa O Lailaa also has been in the news for the inclusion of popular Tamil actor Sathyaraj among the star cast and for popular Bollywood screenwriter Suresh Nair making his Malayalam debut as writer. While the promo did not really impress I was hoping that the film would at least be engaging, which is why I wanted to watch it early on. END_OF_DOCUMENT_TOKEN_TO_BE_REPLACED

James Albert the writer of popular Malayalam films like Classmates (2006) turns director with Mariyam Mukku. Produced by A.K.Sabeer and distributed by LJ Films, Mariyam Mukku features Fahadh Faasil in the lead. The film also features Sana Altaf, Manoj K.Jayan, Aju Varghese, Joy Mathew, Nandu, Prathap Pothan, Thyagarajan etc. The film revolves around a fishing community where all the characters live and it has music composed by Vidyasagar. Gireesh Gangadharan is the DOP while Ranjan Abraham is the editor. END_OF_DOCUMENT_TOKEN_TO_BE_REPLACED

The best of the year lists will be out soon. It is December and an annual ritual for people who love and crave good cinema worldwide; so that rest of the brigade are abreast with the best that they missed out. Critics and cinema lovers will be divided on their opinions with regards to the best of cinema. Some will have a list constituting the best of cinema which includes world cinema and international films, some with their Indian counterparts and some regional.

And in all this lies the high probability of a film called Munnariyippu which may not find any takers. END_OF_DOCUMENT_TOKEN_TO_BE_REPLACED

Ajai Vasudev a former associate of noted Malayalam filmmaker Shafi turns director with Rajadhi Raja featuring Mammootty in the lead. Produced by M.K.Nassar and Stanley.C.S, the film is written by the popular duo- Sibi K.Thomas & Udaya Krishna. Featuring Raai Laxmi (previously known as Lakshmi Rai), Siddique, Mukesh Khanna, Joy Mathew, Unni Mukundan (cameo) etc, Rajadhi Raja has music by Karthik Raja. Shaji is the DOP and Mahesh Narayanan is the editor of the film. Rajadhi Raja is one of the Onam attractions this year. END_OF_DOCUMENT_TOKEN_TO_BE_REPLACED

Lal Jose is one of the most prolific Malayalam filmmakers ever. With an output of 21 films over the last 17 years, many of them commercially successful and a quite a few of them critically acclaimed as well, it is not surprising that his films are always looked forward to even today. While he may not be in the league of his more illustrious seniors from the 1980’s and 90’s, there is no doubt that he is capable of making a good aesthetic commercial Malayalam, which he has proved time and again. It’s not that he doesn’t miss the bus at all, in recent times as much as he has found success with films like Diamond Necklace, Ayalum Njanum Thammil or Pullipulikalum Aattinkuttiyum, he’s also delivered turkeys like Spanish Masala or Ezhu Sundara Rathrikal. But with a track record which comprises more of hits than misses, and with an ability to bounce back always after a dud, I was curious to see what he would do with his latest film ‘Vikramadithyan’. END_OF_DOCUMENT_TOKEN_TO_BE_REPLACED