It is said that war is hell, no two ways about that. But while reams of paper are devoted to immortalizing the slain and surviving heroes of battles we know of, there are so many more anonymous individuals who served their country by just doing their duty when called upon, and went above and beyond the call, only to move back into the shadows when they were done. END_OF_DOCUMENT_TOKEN_TO_BE_REPLACED

Here comes a complicated, contemporary, mature, quadrilateral love story from Karan Johar…well not actually. It is a story of Love, Love lost and Lust with sprinklings of friendship. KJo- true to his reputation weaves a web for his NRI audience with a multi- country, multi-emotional, musical that has you riveted to your seat for the most part atleast. And thankfully there are no uncles, aunts, bhangra songs or sunflower fields!!! END_OF_DOCUMENT_TOKEN_TO_BE_REPLACED

Brothers- the official remake of ”Warrior”- sees Akshay Kumar in one of his best and intense roles. But trying to strike the balance between Bollywood and Hollywood, the director Karan Malhotra gets confused and gives us a mediocre version of what could have been a big blockbuster. END_OF_DOCUMENT_TOKEN_TO_BE_REPLACED

I haven’t yawned this much while watching a film in a long long time. Yes, Brothers is a rare gem of a film in that sense. But, I have had this feeling of ‘when will this film end’ for so many other Hindi films that have released this year. Brothers is truly run-of-mill in that sense.

Karan Malhotra, the director who gave us the commercially successful but perennially boring remake of the 90s cult classic Agneepath, comes back with another remake in form of Brothers (official remake of 2011 Hollywood film Warrior and does exactly what he has done before – he bores us to death. Okay, near death (conceding the fact that I am still alive to write this review). At times, I struggle to respond to those ever-inquisitive souls who come up to you after you have watched a film and ask you – how was it? A film like Brothers makes your job easier– you can simply say ‘boring’ and the answer shall perfectly suffice. END_OF_DOCUMENT_TOKEN_TO_BE_REPLACED

Yeh Jawaani Hai Deewani, a film that everyone I know is voraciously waiting to see, first day first show in theater. No second thoughts there. Such is the marketing prowess of Dharma Productions and Karan Johar. The message is out there and precisely succinct. Come have fun and celebrate life! END_OF_DOCUMENT_TOKEN_TO_BE_REPLACED

Ayan Mukerji virtually stormed Bollywood in 2009 when he made his debut with Wake Up Sid. Though a romantic film, it stood out for the treatment, the music (Shankar-Ehsaan-Loy and Amit Trivedi) and also the slightly unconventional pairing of Ranbir Kapoor with Konkona Sen. END_OF_DOCUMENT_TOKEN_TO_BE_REPLACED 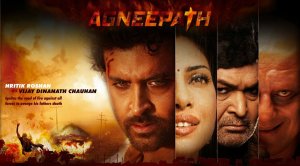 Big stars, big production house, bigger canvas and a big big adaptation. Agneepath had everything going for it, but did it really live up to the expectations of all true blue fans of its original will be seriously disputed in the days to come. It may well turn out to be the intended blockbuster in trade language but will it satisfy the real followers who have been holding it very dearly in their hearts? My answer is a big empathic NO and there are several reasons which I would like to point across which necessarily all may not agree to and this is my personal take.

Note – I am sure everyone is aware of the plot & hence I am not going to dwell upon the same over here.