The long weekend had given me some respite from work from home, I decided to watch a film of which I have heard so much, but never found the time to watch it. earlier Surprisingly as I watched this in the early hours of Sunday, I must say that it kept me hooked on for the entire duration.

Johny Mera Naam is a tale of two brothers who get lost in childhood, ending up in two different sides of the law. But then this is a Vijay Anand film, twist in the tale is that the one who is supposed to uphold law the cop is cheating people to achieve his goals.  Johny Mera Naam might look like a crime thriller at the outset, but like a good pulp film, it has layers to it. END_OF_DOCUMENT_TOKEN_TO_BE_REPLACED

Much before the term standup comedy was known to Indian audiences, there was one individual who had mastered the art of standup and has been enthralling audiences ever since with his wit and spontaneity. The man was an instrumental part of some of the most entertaining Hindi films ever made and his mere presence would always bring a smile to our faces. The person in question is none other than actor and standup artiste Johnny Lever. END_OF_DOCUMENT_TOKEN_TO_BE_REPLACED

Note-Here’s wishing everyone a very Happy Independence Day. 40 Years ago this day, the iconic Sholay had released. Here’s a personal tribute of sorts to the film,as I reflect back in time over Sholay.

For someone who wasn’t even born when Sholay actually released in India (15th August, 1975), I am proud to say that I’ve seen the film thrice in theatres. Sholay was a film which I kept hearing of when I was growing up, both my parents being ardent fans of the film. Unfortunately by the time I remember frequenting theatres the film had completed its original theatrical run in Chennai or Madras as it was referred to then, the city I belonged to those days. Unfortunately there wasn’t any way to watch the film those days unless there was a re-release in your city (which happened once every few years) as it was yet to be shown on TV and there was no home video (VHS) available of the film back then in the 80’s and early 90’s. Of course things slowly changed in the mid 90’s as the film became a lot more accessible to people, creating a whole new set of fans in the process END_OF_DOCUMENT_TOKEN_TO_BE_REPLACED

The movie begins with these magical word, penned by Javed Akhtar and  narrated by the maverick director Mr. Yash Chopra himself and creates the mood that stays till the end of the film- lyrical & nostalgic.

Yash Chopra, who can be described as the grand vizier of Bollywood possessed a body of work that any other director would only aspire to achieve. He has tackled various subjects, some safe, and some rather controversial. He has worked across diverse genres and his movies have ranged from big budget visual extravaganzas (Waqt, Chandni) to character driven minimalist cinema (Ittefaq) and has usually done a fantastic job of them all. END_OF_DOCUMENT_TOKEN_TO_BE_REPLACED

Trishul! 3 years after the record breaking classic that Deewar was, Yash Chopra set out to make another high voltage drama about a son’s vendetta against an errant father. While Deewar was set in the big bad streets of Mumbai, Trishul shifted the location to the plush and sophisticated environment of upper class Delhi.
Like every follow up to a massive hit, this one was grander in scale, bigger in ambition and never really matched the reach of its predecessor. Nobody in their right mind would refer to Trishul as an underrated movie, but, out of Yash Chopra’s biggest hits, this one has hardly been written about by the critics and almost never analyzed. Of course, the following article is not a critical analysis of the movie, but more of a tribute to one of the best dramas ever captured on screen in Indian Cinema. A drama so good it’s been remade in Tamil, Telugu and Malayalam, revisited as Vijay by Yash Chopra himself, and if rumours are true, it will be remade as Aurangzeb with Prithviraj and Arjun Kapoor. END_OF_DOCUMENT_TOKEN_TO_BE_REPLACED 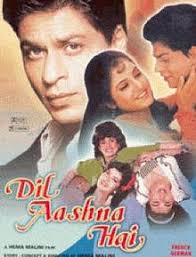 Its so true that if you don’t learn from past mistakes, you will end up repeating them. Easier said than done, because every time we make an effort in the hope that the result would be different and positive, it only drags us back into muddy waters of the past.

About two decades ago, I was standing in a queue for movie tickets of a Shahrukh Khan and Divya Bharti starrer. It was their 2nd movie, after the blockbuster Deewana. And I was at Orient theatre in Calcutta, hoping that the tickets don’t sell-out before I get to the window. The movie was Dil Aashna Hai, first directorial venture of Hema Malini. But that did not matter at all, as I was there to see Divya and SRK. END_OF_DOCUMENT_TOKEN_TO_BE_REPLACED