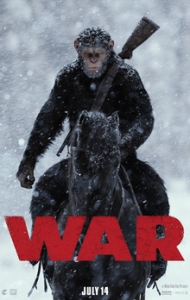 War for the Planet of the Apes is a forthcoming American  science fiction drama film directed by Matt Reeves and written by Mark Bomback and Reeves. It is a sequel to the 2014 film Dawn of the Planet of the Apes and the third installment in the Planet of the Apes reboot series. The film stars Andy Serkis, Woody Harrelson, Gabriel Chavarria, Steve Zahn, Karin Konoval, Judy Greer, Amiah Miller, and Terry Notary. Principal photography began on October 14, 2015 in Vancouver. The film is scheduled to be released on July 14, 2017. END_OF_DOCUMENT_TOKEN_TO_BE_REPLACED