The trick with mixing up genres is to make sure that the story contains the right mix of the conventional and the subversive. It’s always fascinating to see the supernatural element presented on screen out of the traditional genre of horror and even more interesting when comedic and romantic elements are added into the mix. Therefore, when the promos of Phillauri showed up, promising an amusing tale of a young groom haunted by the spirit of a feisty woman from a different era, one did wonder if Anushka Sharma has something new up her sleeve, or is Phillauri another case of old wine in a new bottle? END_OF_DOCUMENT_TOKEN_TO_BE_REPLACED

There are times when one chances upon Damini, Kanoon or Waqt being broadcast on a TV channel or pops in the DVD or VCD of a movie like Yudh, Andha Kanoon or Shahenshah, and notes with amusement, the highly farcical nature of the proceedings in a courtroom. You have the crusading hero who prefixes every argument with flaring nostrils and an impassioned plea of Milord (or Milaaaawwwrrrd depending on who the hero is) or berates the court for making him stand up date after date, a sneering defense lawyer who only exists to object to everything in the most ham-handed way possible. And not to forget the extremely grumpy looking judge who looks like he would rather be home taking a nap, rather than watching the hammy proceedings in front of him. END_OF_DOCUMENT_TOKEN_TO_BE_REPLACED

Like Loading...
It has been 2 months since my friend wrote an article that was published in The Quint. As we expected it went viral. In Bollywood terms it was a 100-crore hit. Most readers saw merit in what he wrote and agreed that it’s a bitter truth that nobody is talking about. There were many who disagreed and they wrote many counter articles. We read each and every one of the articles and decided that we would love to fund the nursery education of some of the authors. I will come back to that later. The point of this article is to see whether we were right or wrong. How has Bollywood fared in the last 2 months since my friend wrote the article?

END_OF_DOCUMENT_TOKEN_TO_BE_REPLACED

Of late Marathi cinema seems to have taken a big liking towards remaking films from the South and all kinds of films across genres are being attempted with an idea of striking it big in Marathi as well. For every Classmates (remake of the Malayalam blockbuster Classmates) which is a success there are also films like Vrundavan (remake of the Telugu hit Brindavanam) and Shutter (remake of the critically acclaimed Malayalam movie by the same name) which didn’t really hit the bulls eye. So when I first heard of Samit Kakkad’s attempt at remaking Kaakka Muttai in Marathi, I was a little sceptical to be honest. It wasn’t that I did not believe in Samit’s intentions, but considering that Kaakka Muttai has been one of the best Tamil/Indian films in recent times, winning critical acclaim as well achieving commercial success, repeating the act in Marathi looked difficult to me. A chat with Samit when the first look poster of Half Ticket was unveiled did give me some hope for sure. END_OF_DOCUMENT_TOKEN_TO_BE_REPLACED

Ace Photographer turned producer Mr Atul Kasbekar is on a high these days as his film Neerja is running successful pan India.He was recently given a surprise by his reel life passengers from film Neerja who kept a special screening of the film and gifted him a photo frame with a beautiful poem written by Madhu Chandhock. The screening was arranged by her son Kashyap Chandhock on behalf of all the fellow passengers.

END_OF_DOCUMENT_TOKEN_TO_BE_REPLACED

Vivek Krishnani has been appointed Managing Director of Sony Pictures India (also known as SPE Films India). His appointment will be effective November 1, 2015.

There are good films and there are bad films. And then there are some films that are so unbelievably bad that you feel like shouting – why did they make this film!!? Hamari Adhuri Kahani, the latest melodramatic overdose from the Bhatt camp, is so regressive, unbelievable, over-the-top and nauseating that you stop expecting anything within half an hour into the film. Mohit Suri, the film’s director, has a reasonable track record with good little films like Kalyug, Awarapan and Woh Lamhe under his belt. In fact, Suri has also been at the helm of affairs for three consecutive blockbusters for the Bhatt Camp in the recent past – Ek Villain, Aashiqui 2 and Murder 2. END_OF_DOCUMENT_TOKEN_TO_BE_REPLACED

In 1982, Mahesh Bhatt made Arth, with Shabana Azmi, Smita Patil and Kulbhushan Kharbanda. Since then, he has made it again and again atleast a 100 times. If not that, he has taken elements from Arth and twisted them around, rebottled them with new flavor, and made a film again. Arth was an absolute classic. Most of its derivatives are not. But Bhatt will never get out of it seems. And he must plunge us as well as he drowns. Directed by Mohit Suri, Hamari Adhuri Kahaani is concocted with a stellar cast, but it is supposed to be the love story of Mahesh Bhatt’s parents. In reality, it is another take on Arth. Albeit drenched in ham-fisted dialogue by Shagufta Rafique.  END_OF_DOCUMENT_TOKEN_TO_BE_REPLACED 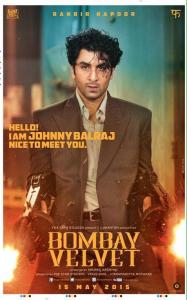 But that doesn’t mean that he makes a bad film. Its just that the standards set by him are so high, that people are willing to tear him down at the slightest mistake.’Bombay Velvet’ is exactly that. The male lead is the ”art direction” and the female lead is its ”jazz music”. In the supporting cast you have Ranbir (Johnny), Anushka (Rosie) and Karan Johar (Khambatta) getting “re-introduced (after DDLJ). They are in turn supported by some good actors like Satyadeep Misra (Chiman) and Manish Chaudhary (Jimmy).
The story revolves around Bombay in the 70s when liberalisation was a far cry while mafia dons, smuggling gold, jazz and blues were in vogue. The set design constructed in Sri Lanka is impeccable and transports you to the nostalgic era of Bombay when it was not yet called Mumbai. Music by Amit Trivedi is pure magic and so is the sensuous voice of Neeti Mohan. Anurag takes a long time to establish the era and the mood of Bombay and makes one impatiently wait for the story to begin. The characters lack depth and the screenplay gets confusing at times. People who are used to the typical Bollywood movies will be disappointed as this is a dark movie. There are lot of “inspirational” scenes from Hollywood, but they are well done and Indians should be used to this by now!
Ranbir is normal, Anushka is a pouting doll while Karan amuses  with his mannerisms and expressions.
Hate it or love it.. but don’t miss it!
– IndieYogi