There is always a certain amount of anticipation that comes with watching an acclaimed director’s follow up to an acclaimed debut feature. When the promos for Gauri Shinde’s debut, English Vinglish first showed up highlighting the return of Sridevi to the big screen, one did approach the film with trepidation as most comeback efforts in Bollywood have displayed a tendency to either be dead on arrival, or crash and burn, Madhuri Dixit’s Aaja Nachle and the Big B’s Mrityudaata coming to mind. END_OF_DOCUMENT_TOKEN_TO_BE_REPLACED 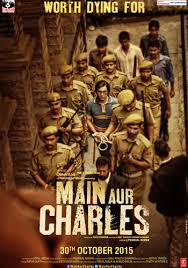 Director Prawaal Raman’s Main Aur Charles is riddled by an inherent dual conflict. As a viewer, if you are familiar with chronicles of the (in)famous ‘bikini killer’ or ‘the serpent’ Charles Shobhraj, you will find Raman’s film to be devoid of sufficient thrill and excitement. On the other hand, if you are ignorant about Charles Shobhraj, you will find Main Aur Charles to be confused, incoherent and incapable of providing any deep insight into the life and times of perhaps one of the most dreaded serial killers in recent times. It is this ambivalent nature of Main Aur Charles that eventually pulls it down, even if it does have its share of merits and a great degree of style and charm. END_OF_DOCUMENT_TOKEN_TO_BE_REPLACED

Happy 2015, it seems the world is still the same as we have people who want to ban films and books and in some cases kill cartoonists. It has been a great journey since the start of this portal,we have completed three years in 2014 and are still going strong. Thanks for your support and for reading our posts. In 2015 we hope to have even more better posts and continue our discussions on cinema across the world. For now we present you some of the best loved articles of 2014 which you people enjoyed.
END_OF_DOCUMENT_TOKEN_TO_BE_REPLACED

Unmindful of their box office gains, I present a list of 10 films which I rate as the best churned out by Bollywood in 2012. A few obvious choices, a few dark horses. If you still haven’t seen any of them, consider this list as a recommendation.
But first, the consolation prizes. END_OF_DOCUMENT_TOKEN_TO_BE_REPLACED

She did it. She did it again! Once Again! She has made me fall in love with her all over again. Though her appearances have been sporadic, but impact? Always Consistent! END_OF_DOCUMENT_TOKEN_TO_BE_REPLACED

There is a formula in movies, those who try, they triumph in the end. Now it doesn’t matter whether it’s 127 Hours or our very own English Vinglish. You take the scale of a film, play it around, and trim it down to the domestic level, at the centre of the film, put a house wife who can’t talk in English, surround her with her family members who don’t miss an opportunity to take titbits at her, or even feel humiliated because of her and disregard her for that. (Ouch, that sounds manipulative, eh, but in the film it isn’t, not to that level as we find in Hindi TV serials, it’s there though, a couple of times.)

Story turns around when, for her niece’s wedding, she is called by her sister to the US to support her. And there she finds new friends and an opportunity to be self dependent, where she realizes that even she is capable enough to carry on with things all by herself. (Oops, that again seems formulaic, yes it is, but the film is breezy, trust me, it’s warm and simple and neat.)

So let’s better not talk about the content of the film, you remove the first surface, and at its core it is a bloody manipulative Hindi serial! But once you remove the 2nd surface and explore another layer, it is as natural and as relatable as it could be. I could almost relate to the house wives portrayed, who cook great food, keep the family happy. In natural lives, humour comes from the slight moments from the naughty kids and their mischief. Despite the core content being formulaic, because it is simple and straight forward, it is natural and it is devoid of unnecessary sentimentality, this movie works.

Sridevi, returning Back (watch the movie and you’ll know) after a long time, proves that heroines of that era were superior to those right now, and how. It is a triumphant performance, a winner. And then, she just overpowers herself, though she sounds really weak at times, more than she could or she should, may be because of her age, or may be because of her audio modulation, I am not sure, though that is not much of a hindrance, as such. Mehdi Nebbou cast as Laurent, a French cook, shines and speaks little emotes more. Sridevi’s daughter’s character in the film seemed a bit extrapolated. Rest of the cast is appropriate, dialogue with broken English works primarily because of the actors who speak them, with honesty. Amit Trivedi’s light, melodious music and Utekar’s light filled cinematography adds to the simplicity of the film.

But it is indeed undeniable, that in this sweet little innocent film, there is nothing extravagantly special. Perhaps, this film is meant to be like that and I am not against it, but somehow this film is like the laddoo in the film, taken in small quantities it works, excess of it doesn’t. Director Shinde confidently handles the film, yet again certain scenes, like the Laddoo distribution scene at the very beginning, the way it is cut, at times it is abrupt, and sometimes it goes on longer than expected. Similarly, certain scenes aren’t properly done, few seem unnecessary, few seem melodramatic, like the one where her daughter calls her to help her in finding her scrapbook. But it is tricky to choose such a subject for a film, for once you stumble and such a picture doesn’t take a lot of time to fall on its knees that it avoids.

Because, ultimately, all it takes is an attempt, to step forward, and this world opens up automatically. Perhaps that’s the place where this film breathes. And even a Non-English speaking Indian or even French, Spanish etc can manage anywhere. But that’s not the point of the film that really works for me. What really works is the beauty with which it is showed that even in our innocent mistakes, there is truth hidden somewhere. The honesty with which Gauri Shinde, drives out amusement and presents it in front of us, it is just not overdone or incomplete, its plain believable. It is shown accurately, when someone who is not good in English talks to someone else who is not good in Hindi or, sometimes verbal skills aren’t as important as the non-verbal ones, the feelings know no language. Or the heartache is same everywhere.

Ok for quite sometime we have all been hearing of Sridevi making a comeback with English Vinglish & finally the first look and teaser of the film is out. The film is directed by ad filmmaker Gauri Shinde & her husband R.Balki is one of the producers of the film ( the others being Sunil Lulla of Eros, Rakesh Jhunjhunwala & R.K.Mani ). English Vinglish has music by Amit Trivedi while Laxman Utekar is the DOP, Hemanti Sarkar is the editor and Resul Pookutty takes care of sound. END_OF_DOCUMENT_TOKEN_TO_BE_REPLACED