China is a country which is known for stealing ideas and not respecting copyrights of anyone in the world and also known for deliberately hiding the spread of China Virus aka Covid 19 and putting the entire world to the risk for years to come. Like the typical Chinese mentality which is to knock off better products and make cheaper replacements, the Chinese Communist Government has been encouraging propaganda films. There is no harm in it, the Nazis and Russians did it too and it worked for them. Propaganda films can be interesting if it is engaging otherwise it just is another press release from the Government which no one bothers to read but mainstream media is forced to carry out due to the pressure from higher-ups. END_OF_DOCUMENT_TOKEN_TO_BE_REPLACED 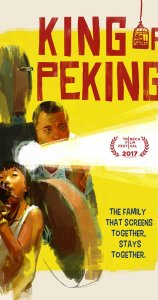 An official selection at the Tribeca Film Festival 2017 and the Los Angeles Asia Pacific Film Festival 2017, King of Peking is a film set in 1998 and it follows a traveling film projectionist who, with the advent of DVD, starts a small pirated movie business from home in order to keep custody of his son. Written and directed by Sam Voutas and produced by Melanie Ansley, the film also underwent a successful crowdfunding campaign on Kickstarter.  END_OF_DOCUMENT_TOKEN_TO_BE_REPLACED

Acclaimed Hong Kong based filmmaker John Woo is back with his latest film in Chinese, The Crossing. Based on a real incident,the sinking of the steamer ‘Taiping’ in 1949, this is a 3D epic drama split across 2 parts, the first of which released in China on 2nd December,2014 and the second part is likely to release in May 2015. END_OF_DOCUMENT_TOKEN_TO_BE_REPLACED