There was a time when one watched Malayalam films partly with a view of getting that reassuring feeling of how life continues to be a lot less chaotic back home in Kerala. Of course this is generally with reference to a non-resident Keralite like me. Times have of course changed, Kerala isn’t really all that tranquil overall as it used to be. There are signs of development and change all over and not really restricted to a Kochi, Thiruvananthapuram or Kozhikode, but even in the interiors as well. Of course once in a while we do get to see films like Maheshinte Prathikaaram which still enable one to soak in the ambience and the feel of the days gone by. While I am all for development and personally enjoy a lot of the so called new generation films, I do admit that I also do yearn from time to time for tales that are simple and rooted and giving me a glimpse of the state that usually serves as a place where I get to recharge myself once in a while. END_OF_DOCUMENT_TOKEN_TO_BE_REPLACED 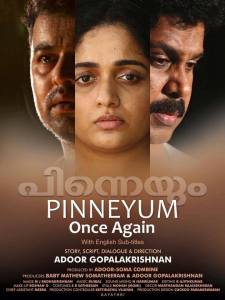 Pinneyum ( Once Again) is a forthcoming Malayalam film that sees veteran writer-director Adoor Gopalakrishnan back after a long gap of 8 years. He has written, directed and co-produced Pinneyum (with Baby Mathew Somatheeram being the other producer). The film features an interesting star cast, with popular pair Dileep and Kavya Madhavan in the lead and the supporting cast sees Marathi actor Subodh Bhave making his Malayalam debut. The rest of the star cast includes Nedumudi Venu, Indrans, Vijayaraghavan, Srinda Ashab, KPAC Lalitha etc. The music is by Bijibal while M.J.Radhakrishnan is the DOP and B.Ajith Kumar is the editor. END_OF_DOCUMENT_TOKEN_TO_BE_REPLACED

One often hears of children being forced to work against their wishes, often by family members knowingly and clearly exploiting them. But then there are also the odd cases of kids being pushed into working at an age when they should ideally be in school, a case of circumstances turning out to be the villain in their lives. Often people, who are considered trust worthy, go on to exploit the children or their family members, as a result the kids in question go on to suffer for no fault of theirs. There have been attempts made by quite a few filmmakers to highlight upon the aspect of child labour, which is illegally still being practiced in various parts of the country. But Jayaraj’s Ottaal aka The Trap, winner of 2 National Awards for last year and the winner of the Kerala State Film Awards for Best Film, is quite a special film indeed. END_OF_DOCUMENT_TOKEN_TO_BE_REPLACED 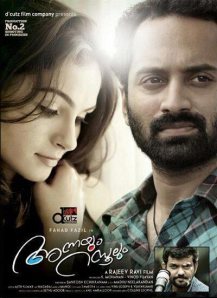 Rajeev Ravi is a well-known name to people following Hindi Cinema seriously. He’s mainly known for his collaboration with Anurag Kashyap whereby he’s been the DOP on films such as No Smoking, Dev D, Gulaal, That Girl in Yellow Boots and Gangs of Wasseypur (Part 1 & Part 2). But outside this association also he has handled the cinematography of films like 99 and Chandni Bar (his debut film) and in fact has left his mark on Malayalam Cinema as well with Classmates ( 2006 ) being his most successful film. END_OF_DOCUMENT_TOKEN_TO_BE_REPLACED