Bombay now Mumbai, was a city considered to be a cosmopolitan city, a city which was only concerned about making money and not interested in knowing from where you have come from or who were you.  Post ’92, the fault line has run deeply with ghettos that are now an integral part of my city.  For a city which is the epicenter of Bollywood, there are hardly any movies based on ’92 riots. The one which comes to my mind are Bombay and Black Friday, both coincidentally directed by people by non natives. END_OF_DOCUMENT_TOKEN_TO_BE_REPLACED

Godfather has been an inspiration for filmmakers across the globe. Closer home Mani Ratnam has adapted it as Nayagan. What makes Godfather interesting is that it showcases the human side of the mafia, people who are vulnerable and jealous like us. END_OF_DOCUMENT_TOKEN_TO_BE_REPLACED

I am reminded of this quote after watching Surender Reddy’s latest Telugu film Dhruva and not just because the film actually even refers to the quote in its own way.  I have always believed that a real hero, a formidable one whom we can look up to is someone who has been really tested by an adversary worthy enough of his/her calibre. And this definitely applies to a hero in an action film, remove the antagonist or make him/her weak or not so worthy and there’s nothing so unique in having a dashing hero, even if the person is larger than life. Take any action film as an example and try to apply this principle, leaving aside exceptions I am sure majority of the films which really worked and stayed put in your minds definitely had a powerful antagonist as well.  END_OF_DOCUMENT_TOKEN_TO_BE_REPLACED

Newton’s famous third law of motion states that “for every action, there is an equal and opposite reaction”, one of the more fascinating things that I learnt in school in Physics which I still remember and also appreciate. While the law perhaps might be referring more to a scientific viewpoint, I have always felt that there could be takeaway for the same in terms of life as well. Have you ever wondered what would our life be like if it wasn’t balanced? Would you appreciate a life full of downs and no ups & vice versa? Would you appreciate the very concept of happiness if you didn’t experience sadness in the first place? For every rich man there has to be one or more poor people as well. I can go and on, but the fact remains that to have a good life one has to have a balance between everything. Similarly when you come to a movie which clearly involves a specific protagonist and antagonist, then they better be well matched for each other, or else it would remain simply a one sided game. If I consider myself from an audience view point I’d feel terrible if the antagonist hardly measures up to the protagonist. END_OF_DOCUMENT_TOKEN_TO_BE_REPLACED

Produced by Gemini Film Circuit and Madras Talkies, written by Jeyamohan and Mani Ratnam, directed by Mani Ratnam and starring Arjun, Arvind Swamy, Gautham Karthik, Thulasi Nair,Lakshmi Manchu and Ponvannan, Kadal is a story about sin and redemption, about faith and humanity and revolves around the life of Christian Fishermen, set against the backdrop of a sea side town near Tuticorin. END_OF_DOCUMENT_TOKEN_TO_BE_REPLACED

Every Mani Ratnam fan is waiting with bated breath for the trailer of his upcoming Kadal. So how could we at MAM not be excited?

Mani Ratnam has not just directed the film but also co-produced it ( along with Manohar Prasad ) and co-written it ( along with Jeyamohan ). The film as we all know by now introduces Karthik‘s son Gautham Karthik as hero and Radha‘s daughter Thulasi Nair as heroine. END_OF_DOCUMENT_TOKEN_TO_BE_REPLACED

An A.R.Rahman – Mani Ratnam combination is always one to look forward for all movie buffs. Right from ARR’s debut in Roja to Raavan(an) in 2010 they have presented albums which have largely been musical delights and even in the case of a relatively tepid Raavan, their work has at least been very different from the run-of-the-mill stuff. END_OF_DOCUMENT_TOKEN_TO_BE_REPLACED

Once upon a time in Mumbai, you’d have to drag me away from the Santa Cruz aiport, literally prevent me from catching another flight to Chennai. The cities were still called Bombay and Madras then. Life was cool, cinema was cooler and conversations with this brand-new boss of mainstream Indian cinema were the coolest. Dhan ta na, that was Mani Ratnam. END_OF_DOCUMENT_TOKEN_TO_BE_REPLACED

One of the most anticipated films from the time it was announced, ‘Bombay’ created a big furore over its content and was an extremely controversial film due for release. Even though the Tamil version had a smooth projection in March 1995 but the Hindi dubbed version was making sensational headlines on front cover pages with almost all political activists like Shiv Sena etc. calling for a ban. Being an ABCL presentation helped it to a great extent as Mr.Bachchan’s proximity with Mr.Bal Thackeray helped in getting the movie a clearance, who had his own reservations even with the name of the film but, eventually gave his consent.

But that was not the case with the Muslim fundamentalists as they objected to a lot of scenes in the movie (lifting of the burqa by the male protagonist, the female protagonist taking the quran while absconding to Bombay with the chanting of verses in the backgroud are the ones to name a few) and needed a cut even after the Censor board had cleared the same. The movie was pulled out of theatres from the first day of its schedule release in Mumbai without a show being live and there were violent protests all across here. Finally it got released on the subsequent Tuesday amidst heavy security with cinema halls looking like a battle fort and strict policing as the movie went on to create history.

I have great admiration towards Mani Ratnam for making films on various subjects which take inspiration from real life and that includes famous epics, social issues, terrorism, politics and history. His films are always an excellent combination of his vision with great camerawork and amazing music.

I can recall very few films being viewed in theatres during my earlier days and Bombay is one such film that still remains etched in my memory mainly due to the topical theme and the turmoil it created near its release.

Shekhar (Arvind Swamy) is the youngest son of traditional Hindu parents and working as a journalist in Bombay with The Indian Express. On return to his seaside village he catches the glimpse of a young burqa clad woman Shaila Banu (Manisha Koirala) when her veil is lifted by the breeze. Infatuated in love instantly with her (Mani Ratnam doesn’t waste much time to make his characters fall in love), Shekhar spots her the second time at a Muslim community wedding which is shot against the backdrop of the beautiful song ‘Kannalane/Kehna Hi Kya’. Shekhar’s intensity grows in stature accordingly with such small occasional meets and does not care for the consequences of being in love to a girl from different community neither hesitates to express it. On the other hand Shaila is reluctant initially but eventually agrees to his passion. Please listen to my favourite song here.

Obstacles and trouble arise when Shekhar takes the marriage proposal to Shaila’s father, who is furious and unwilling about it. Shekhar’s father too disagrees and lands up confronting Basheer to keep his daughter away from his son resulting in a fallout with Shekhar who returns back to Bombay.

Always in touch with Shaila through letters, Shekhar sends her rail ticket to Bombay who eventually runs away from home and on arrival they both get married on the same day at a marriage register office. Being happily married with twin sons, the film goes in dark territories as tension sparks in the city with communal riots happening after the demolishment of Babri Masjid, where thousands are killed in the violence. It moves on to a powerful drama of the religious fights that tore the city apart and how bigger tragedies occur to their peaceful little world and to the city which never sleeps. Mani Ratnam hurls all the horrors and chaos of fusing religious fanaticism in your face.

The second half of this film works very well where the riots are depicted with outstanding authenticity and is disturbing as well. Relationship between the fathers of the main protagonists which is very tense initially melts away as they accept their children’s marriage over a period of time. Both Nasser (Narayan) and Kitty (Basheer) who portrays their respective role, having silly fights when they come to Bombay are a joy to watch. Some scenes between the two are excellent and particularly one is a masterstroke where Basheer comes to Narayan’s rescue after making his way back home from Aarti and confronted by people belonging to the minority who stops and questions them. Basheer intervenes and informs them that Narayan is his brother and gets emotional for having saved his life and the state of affairs around.

Or the scene where Narayan risks his life to take Basheer’s quran and the cylinder blasts while they try to get out of a brning house. The background score for the second half is an achievement and enhances every moment. The transvestite guy who shelters and feeds one of the twin kids is marvellous in a small role. The best moments in ‘Bombay’ are captured while the city burns in hell and is Mani Ratnam’s attempt for bringing the issue of religious divide. What begins as an innocent romantic fluff becomes a heart tugging, almost claustrophobic experience as the two parents look for their children lost in the confusion.

Technically Bombay has terrific camera work and an amazing score. Mani had briefed Rajeev Menon that the film being about riots, they needed the 1st half to be as beautiful as possible. Having a lot of blues the exteriors where shot in Kasargod-Kerala and the interiors of homes in Pollachi-Tamil Nadu. The moist atmosphere in the opening scene and the rains in village are magnificently captured on screen.

The city of Bombay was created on two streets and even Thota Tharrani deserves a special mention for his brilliant artwork in recreating the riot filled atmosphere.

A R Rahman’s outstanding soundtrack as well as the BGM is what makes ‘Bombay’ a wonderful journey, be it ‘Kannalane/Kehna Hi Kya’ or an emotionally filled ‘Uyire/Tu Hi Re’ and the catchy ‘Humma Humma’, all songs still make for a melodious listen and have tremendous recall value. Bombay Theme is one of the best instrumental pieces in world music and was even used in Andrew Nicol’s Lord of War. 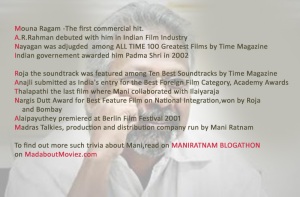 Arvind Swamy is convincing with his performance as the romantic lead first and then a concerned father and husband post interval. Manisha Koirala’s performance is a revelation and this was her big ticket film where she is charming as a sweet and innocent Shaila and equally warm and protective as the mother. There are some tender moments aplenty between Arvind and Manisha, and they share a terrific chemistry making them highly believable as a couple on screen. Prakash Raj is in a blink and miss role as a police inspector with Tinnu Anand and Akash Khurana as the religious heads being adequate.

At the heart of ‘Bombay’ lies the message of peace and unity regardless of our religious background and it also makes a point that such fights are senseless, where innocent lives suffer more often than not. ‘Bombay’ is a beautifully told story with Mani Ratnam at the peak of his powers, making it an unforgettable film.