British song writer and singer of Indian origina, Shayan Italia has been getting noticed for his interesting work of late. Here’s an excerpt from a conversation with the talented artist.

What was the inspiration behind the number Sha La La’?

I don’t write for anyone. I started writing songs after losing my Mum at a young age and she gifted me a piano that she never lived to see. So in essence I write for myself and the situations around me and what I see and feel. I wrote Sha La La a while back. Someone had left their keyboard at my place in London at the time and I was fooling around on it and came up with a unique riff and chorus that was very catchy to me. From there I placed tongue and cheek lyrics to it, which everyone seemed to love. When I came to India from London I thought it would be a good idea to convert a song from the vast song catalogue in Hindi and test the waters here to see if the music can work on both sides of the pond.

‘Love beyond boundaries’ is a message needed for the present times. But what’s the feedback you received for the visuals in India?

I think India has become more progressive over the last few years, much more than people think. Much of the youth is acquainted with progressive sexuality on screen (especially with entrants like Netflix and Amazon Prime TV into the marketplace). Also increased exposure to the International art world depicts a lot of nudity itself. Many are far more well-travelled than ever before and there is a general rise in awareness. If you look at the visuals carefully of the Sha La La video, you’ll see there isn’t anything revealed as such but it’s more “suggestive”. This is what great art to me is. It is the “meaning behind the painting”. The feedback for the song from people who are well travelled and educated has been pretty great. The negative feedback is more inclined with “societal judgements” made than their own personal ones. An example is “This is inappropriate for a land like India”. I don’t even know what that means? Having said that, great content sparks opinions from both corners, but so far the positive feedback far outweighs the negative.

You also said The music video is an ode to King of Pop Michael Jackson’s Black or White. Tell us something about this.

Michael Jackson set the era for the “BIG VIDEO” and the “CONCEPT VIDEO” and we’re all trying to emulate it. I think when you look at music videos today, they are more budget made, more “keeping things simple” than actually creating a concept people can buy into. So in a way, I think if Mr. Jackson were alive and looked at the Sha La La video, he perhaps would have said “this is a cool concept and different”. Maybe. 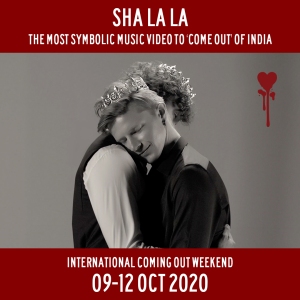 Tell us something about your Rendition Of ‘Jana Gana Mana’. What was your thought process?

The national anthem in its presentation at the cinemas never quite appealed to me with the pixelated Indian flag flying around and a horrible MIDI type version of the same played, which you were made to stand to. If given a choice I was like “IWouldNOTStandForThis”. So I thought to myself “What would I stand for?”. What is the version of the anthem that would touch my soul and have true meaning. And I found the answer within, the story within and the truth within. The Indian National Anthem #IWouldStandForThis is a simple depiction of a boy’s journey in remembrance of his late Mum and the gift she left him. It’s that simple. It’s that profound. The rest as they say is history…it now stands as the most viewed National Anthem ever on YouTube.

Please tell us about the team involved for Sha La La? Where was it filmed?

Sha La La was filmed in Bangkok Thailand; a partnership with Benetone Films and a production crew from India. Muni Agarwal who directed it has vast experience making advertisements and Gianni Giannelli is the revered Director of Photography from Rome that we brought on board. Sunny Salvi, our executive producer brings in a wealth of production experience and Neha Bhattar led the casting. With vast experience from each side, we made a conscious decision to have people from all countries featured as eventually the song is to be launched internationally in its original English dialect. It was a 3 day intensive shoot. Post-Production took a bit of time. We spent a lot of time on the edit and building sections like the Instrumental between the Ballet Dancer, Pole Dancer and myself on the piano. Every part of the video is synced to the music on the down beat. It’s what makes it very visually appealing and feels like the music and video work perfectly together.

What drives and motivates you? Do you feel compelled to make new music often?

I’m a prolific songwriter. My catalogue now stands at over 100 songs and I write when I get inspiration and have access to a piano. I’m a very disciplined individual so a lot of my motivation comes from within. I guess when you see both your parents pass away fairly mid-way through one’s normal life expectancy, you don’t take things for granted and tend to work a tad bit harder than most and push oneself more than most to become the best version of yourself. There is a grand plan for the music catalogue, but it’s a very large vision and will take time to “set the stage” as they say.

Are you looking at working in Bollywood?

For now I don’t see myself working in Bollywood. The music I create is written and built more for the International stage.

I have 3 projects ahead of me, for which some are dependent on when we get out of COVID-19. The first is the launch of my flagship wellness app that launches early next year. The second is the launch of my debut single Internationally (a gorgeous love song you’d want to walk down the aisle or have your first wedding dance to) and the third, is launching the Sha La La video and song internationally (this will be in its original English depiction that would have far more mass appeal the world over).