Written and Directed by Eashvar Karthic

Another week, and yet another disappointing fare that makes it to the OTT platform as an exclusive prime release. And what you learn from these movies, which follows the earlier tamil release PONMAGAL VANDHAL is that hill stations are no good for children.  Here again, while the setting shifts from Ooty to Kodaikanal, the situation remains the same. Kids are being kidnapped from their mothers.

In the movie oddly titled PENGUIN, Keerthy Suresh plays a mother in search of her child.  Sticking to the trend of odd naming, she is named Rhythm, that gets sweetly shortened to Ritu on occasions. When we are introduced to Rhythm aka Ritu, she is an expecting mother, seven months pregnant. But she is also one suffering from the trauma of losing her child six years ago. All she has is the crumbles of the past…. the kidnapping of her little son supposedly by a man with a Charlie Chaplin mask and an umbrella. The images keep haunting her to this day.

However, one night, the ghosts of her past reappear. Not only she sees the mystery man, but also out of nowhere, her long-lost son mysteriously reappears.

Where had he been all these years? Who was behind the kidnapping and why?  Rhythm finds only more questions as she tries to puzzle it all together, but answers come none whatsoever. 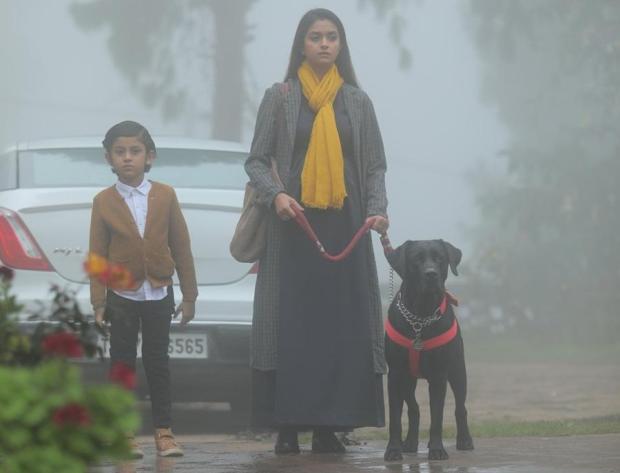 Like all serial killer flicks, the central plot is about the mystery figure behind the scenes of the crime and the clueless protagonist furiously trying to unearth and solve the puzzle. And in such movies, the mood is critical.  Technically, debutant director Eeshvar Karthic realizes this and has his finger on that pulse creating the atmosphere fitting for the thriller ride. Skillfully supporting him in this task is music composer Santosh Narayanan and cinematography by Palani Karthik.

But therein ends the good things. Because the writing on this again by Eeshvar is painfully a letdown. I am still not sure exactly what about the writing impressed a filmmaker like Karthik Subbaraj to back a project like this.  In fact, I wonder how the writer in Eeshvar was able to convince himself that the ridiculous climax and the motives were good enough to fuel this story.

Even if you leave the final climax aside, the preceding screenplay comes with its share of problems. It seems unsure what it wants to be for most of its running time. Does it want to be an out and out serial killer movie. Or does it seek to be an emotional tale of a mother. Or does it want to be spookier and chiller than it all.  The film seems to be eternally stuck in this confusion.

For starters Rhythm ends up losing the things she is to take care of, quite easily. Almost like a habit. You see the scenes play out and you can predict how exactly the scene is going to play out. And again, the screenplay is not exactly rooted in logic. Cops are literally useless. A pregnant woman is left to do all the sleuth work with a trusted dog as partner. The guys are always missing. Too many expositions, chunky dialogues, and cringeworthy acting from the rest of the cast makes this hardly the tense thriller that it seeks to be.

Also, couldn’t help but notice the heavy influence of the Nolan-Batman movies in the way certain things are treated. Like the fear of buzzing insects, or the climax where the lead protagonist must choose between two options on which to save. Or coming to think of it, even the interrogation scene. Not that any of them is pulled off effectively. 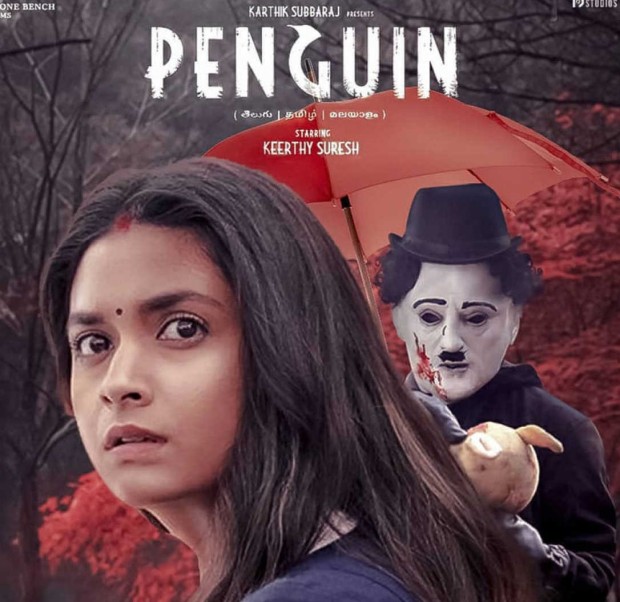 Keerthy Suresh surprisingly does well.  After spending an eternity being just a prop in most superstar vehicles, and getting that award-winning turn in Mahanati, she certainly seems determined to make the best of her new stature. In Penguin, she does a solid grounded act. The abysmal show from the rest of the cast helps, because it makes her indeed look the Award-winning actress. The cast was so disappointing that literally a dog outshines the rest of the cast here, in both characterization and performance. When you have a dog showing more brains than the humans, you know something is off.

Penguin plods and waddles before falling face down. Barring a sincere Keerthy and a few technical notches as mentioned above, the rest of the film fails to do what it sets out to. Instead the movie is at the receiving end of the cruelest cut of them all – some ridiculous writing.  Certainly avoidable!