Two people meet, a bored doctor in her late 30’s and young man in his 20’s. Sparks fly, they bond over food and fall in love. Well this could be story of so many countless romantic films. So, what makes Aamis stand out? 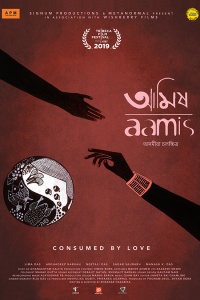 In Aamis we get a forbidden love story between a young man and a doctor who is bored with the monotony of her life and marriage.  Bhaskar Hazarika’s second film treads the line separating what is normal or not cautiously. As I type this, my town is under lockdown for more than 50 days due to COVID 19. Things which were normal are abnormal now, things which looked futuristic earlier are now normal.

The major part of the film is reflecting upon moments of how we fall in love. Waiting for texts messages, the longing glance and bonding over exotic non-veg food. In contrast we see the doctor who eats with a fork and spoon even in a low rung dhaba, while the boy devours his food with his fingers.

What makes Aamis relevant in current times is the politics of food in India, where people have lost their lives due to food they allegedly consumed. We live in a nation where people are discriminated on the basis of the food that they eat.

The bonding of two lovers could be over poetry or literature or music but here it happens over food. Once the tone is set and the love story is established, the film moves into the terrain of the obsession followed by rush, the yearning for partner, here it subverts soon into something else.

When the last act comes, it hits you like a drug, this is the point where you see the downfall and moral decay of the characters. As a human no matter what, we draw a line somewhere, I guess it is what it makes us humane.

It ends on a high note when the two lovers unite physically in a sense, when they hold each other’s hand while their faces are covered.  Some love stories remain shrouded in the dark alleys, compounded by the fear of moral values, but then does love need to remain caged in this? May be yes or no, no one can say with conviction.

Aamis like all great films makes us ponder about what is right or what is wrong, go watch it. It is easily one of the best films, I have watched this year.