It has been a while since I have written here. Our site had become dormant of sorts of late and sadly we even recently lost our domain to a cyber squatter and we have now moved to madaboutmoviez.in. Anyway, it is time to restart from scratch of sorts and be back in full force again.

This year, I feel it is Telugu Cinema which has increased the count in terms of quality of films. I guess when I wanted to write about a film which moved me in recent times, I choose to write about Dear Comrade, a story about a person who finds his way again.

We all known the uproar that #MeToo had created last year across the globe, as more and more names came tumbling out, the initial shock just turned to apathy. Looking back, most of the predators are back to their regular life, while the victims are still struggling to cope. Sexual harassment in the workplace still remains unaddressed, we have still a long to go to achieve gender sensitization and create a work environment that is friendly to females, hopefully, one day we will be there.

Vijay Deverakonda who rose to fame with Arjun Reddy, which was accused of being a misogynist film, comes up this year with a film which talks about one of the most important topics of our times.

When the film opens we see our hero walking in a drunken stupor, with a cigarette in hands with moist eyes and soon has bloodied hands, but do not be fooled, this is not a cutesy boy meets girl love story.

The first half of the film is set in a flashback, which traces the journey of hot-headed Bobby and Lilly, wherein in the first half we see Bobby yearning for love and companionship of Lilly.

It is in the second half that Dear Comrade soars and shows the ambition of the director with which he approaches the subject. Post Nirbhaya we had a series of films where we have showcased rape as an evil and end of the road for victims. Most films from Temper to Mom had the conclusion in the form of killing or retribution as the only way rape victims can find solace.

There is a scene in the second half here, where Bobby realizes thatt the change in behavior of Lilly is due to the fact that she has been harassed sexually. He asks her to come out, in this telling scene we see that Lilly who has been wearing western outfits earlier, has started to dress demurely while going out with him. She takes a step backward and goes to put on her dupatta, the director does not pause on this, but in this micro-second, we are made to understand how victims of sexual harassment are made to feel guilty for no fault of their own.

A few scenes later, we see an exasperated Lilly explaining to Bobby that she does not want to file a complaint, how all the men her in life be it her father or her predator or Bobby, everyone wants her to behave in a way which they want her to be, but not even good-intentioned Bobby asks her as to what does she actually want.

One common refrain which we heard and still hear is why did the victim not file a police complaint. I guess we need to understand everyone has a different sense of coping with trauma and we should give each of the survivors their own time and help them in a way that does not harm them. 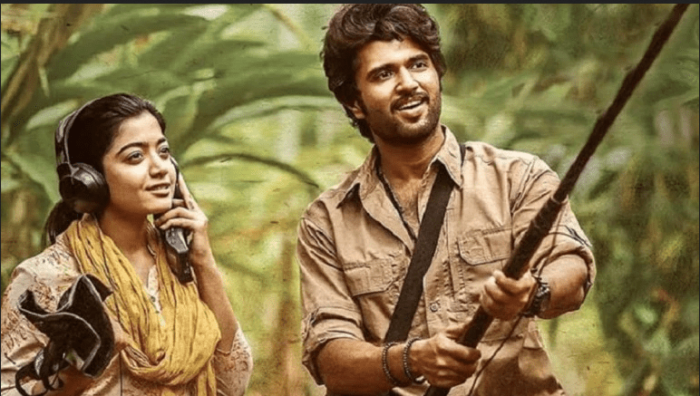 Cinema is still a big influence in our nation, like any art form which is worthy of our time, Dear Comrade comforts the disturbed, and disturbs the comfortable. It is noteworthy that in times of hyper polarization and signal virtuing, Dear Comrade comes across as a breath of fresh air. It does not treat its women character as a victim or glorify them like a goddess, but as a human being who is trying to grapple with situations around them,

Vijay Deverakonda is a star in the making, the director knows he has got a rising star and we get to see fireworks during action scenes, the swag while walking etc. But what makes Vijay stand out are two scenes in the film. One scene is where he goes back and hugs the girl in love with him in a passionate embrace, when the camera zooms on his face, we experience a sense of tranquility similar to someone in love faing it when they find their soulmate.

Dear Comrade flirts with idea of communism on a superficial level, but it does show us what makes us human. It is not love, but empathy and compassion.

In an interesting turn of events, we see a feisty Lilly turning demure after she is bullied and harassed, while Bobby wants to take a stand against bullying and stands up against her bully. This may be an inherently female trait, to avoid confrontation or to think being in denial of a problem can solve it. Bobby’s fight for justice is to make Lilly realize that she will have to stand up against her predators and when she does that eventually, Bobby is not even in the same room, that is what makes Dear Comrade interesting. It does not piggyback on men to fight for the victims, but it takes a nuanced view on how we should help victims in whatever way we can and in the end bullying or harassment cannot be ignored just by denying the fact, but by taking a stand against it.

As of now, when I am writing this, workplace bullying and sexual harassment for females is still a major issue which needs to be addressed, many of those who were named in #MeToo moment are being rehabilitated while the victims are still waiting for justice.

Concluding the article, we all watch movies, because it gives a sense of poetic justice which many of us may not get in our life. Dear Comrade, gives us the solace that the world will be a better place and we will find our comrade one day.