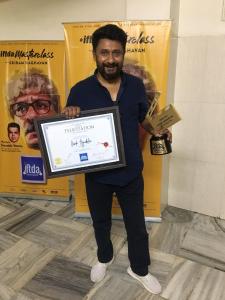 The film records a collection of INR 20 Cr plus with a shoestring making & marketing cost of 4 Cr and garnering a position among the top 5 “profitable films” status of 2019. The Tashkent Files, released on 12th April faced a slew of onslaughts week on week from the big budget and star led films like Kalank, Avengers, SOTY 2, Bharat and De De Pyar De yet it maintained a steady graph gliding through its 12th Week run.

The award was presented to Vivek Agnihotir by 4 times National Award Winner Madhur Bhandarkar and Sriram Raghvan. Talking about the recent honour, Vivek Ranjan Agnihorti, Director, The Tashkent Files stated, “It is always heartening to be recognised and acknowledged by the fraternity. This film has broken all the rules, it has every element that is a big no-no in film’s rule book. Yet it ran for over 80 days. This means that if you chase your conviction, anything is possible.”

Agnihotri has announced his next venture- The Kashmir Files which is based on my mass exodus of Kashmiri Pundits and the biggest ethnic cleansing that India has seen. The Tashkent Files is still running in theatres.