From all those history lessons back from school, there was one powerful imagery that stuck in most of our heads – that is of a woman warrior fighting an uphill battle against the British empire with a child strapped to her back. You may know or not bother to remember anything or everything around the event, but that imagery had always been powerful. Thus in these times of biopics and real-life events making it to the big screen, it was a no-brainer to get a movie based on India’s real life ‘wonder woman’ the Jhansi Ki Rani, Laxmibai out there. The journey wasn’t easy but certainly it had been headline making. Post all the controversies and plot-twists, the producers have finally managed to release their ambitious biopic MANIKARNIKA: THE QUEEN OF JHANSI.

In terms of casting, there isn’t a better candidate for the role of the brave, fierce queen in the Bollywood industry than Kangana Ranaut herself. Not because the other big names don’t fit the bill, but Kangana has been preparing for this role for some time offscreen. She has stood out as this lone fighter against the Bollywood bigwigs with her outspoken and candid persona, thereby making her fit the role like a glove. So, when she is out there playing a woman defying stereotypes and taking on social norms and traditions single handedly, we ask no further questions. She instantly sells the character of Manikarnika aka Queen Laxmibai.

The movie starts off with the oh-so-familiar Bachchan Saab’s booming voice talking about how the evil East India company has been taking control of the Princely states. At this point, you are thinking two things – are you headed for an epic like Lagaan or a dud like the Thugs of Hindostan?

Soon we are introduced the girl child who is predicted for ‘greatness’. And on the Manikarnika Ghats, she is named ….no prizes for guessing.

Cut to a grown-up young woman who, in the initial few reels itself is established to be a skilled archer, expert at sword combat, an animal lover, educated and a voracious reader. Impressed by her skills and bravery, an alliance is sought from the Jhansi kingdom and Manikarnika agrees. That is after we are also established another important aspect- she is a desh bhakt.  A patriotic song is sung to her lest she forget.

Now Jhansi is facing a serious threat from the British Company who is out to annex the kingdom under the ‘Doctrine of Lapse’ policy and therefore it is essential to avert it by having an heir to the throne. The kingdom is hoping they have found the right bride in Manikarnika (who is now rechristened Queen Lakshm) for their king (played by Jisshu Sengupta).  However, Manikarnika turns out to be a little too ‘wild’ for the throne. When the Queen mother is hoping her to take to the domestic ways of the palace, Queen Laxmi is keener on taming wild horses and the Brits.

Though history shows that the Queen had been on friendly terms with the British for most of her reign, what is the point of a Bollywood production if there is no ‘masala’ added?  So we make way for some seeti-maar scene that pits Queen Laxmibai with the British.  For starters, the Queen is in no mood to bow down to anyone. This gets the English officers furious.

Then she becomes the protector of cattle, by gatecrashing the Brits party and ensuring they get to enjoy no steak. The English officers are livid.

And then she ends up making the officers to turn up to work on a Sunday. By now the English officers are enraged.  At this point, them baying for her blood is understandable.

In between all this getting on every one’s nerves, the free spirited queen also finds time to bear a child to the throne. However, tragedy strikes, and now the Queen is forced to step up and protect the throne and keep the enemies at bay.

What follows is in lines with the historical events, so not sure whether revealing more about the plot would essentially be considered a ‘spoiler’. The 1857 mutiny strikes and the rest of the second half has the Queen taking the fight to the colonizers.

It eventually closes up with the words of Officer Huge Rose that remarked Queen Laxmibai as a ‘a man among mutineers; the dangerous of all rebel leaders’

I am not sure if it due to the change in the director’s seat or if it was originally scripted in this way, but one cannot deny the confused bi-polar nature of the screenplay.

On one hand, it tries to become this voice for ‘woman empowerment’. Only to have it ruined with a facepalm moment later when the King reveals the reason why he wears bangles in his hand.  In one of the big moments mentioned above, the Queen boldly makes her stand clear that she will not bow down to anyone. Fine, but then why follow it with a hullabaloo when another character is thrown out of the kingdom for refusing to bow down to the Queen?

The one that takes the cake, though, is much later during the battle where the English positions their cannons behind a temple. Now for a movie that has been blatantly going on and on about love for motherland before everything else, it suddenly has the characters deciding that the protection of the temple is primary. So, they work around a way to carry on the attack without causing any damage to the temple, even putting their own lives at stake!

After a point, it turns out to be all trumpets of jingoism and ‘naari-power’ with no real substance.  In fact, it works as a “beginners’ guide to the Jhansi Rani with the depth of an Amar Chitra Katha.

What though makes the movie work, to a decent extent is the powerhouse efforts of Kangana. She gives it all to the titular role of the fierce and brave legend. It is a performance that rises above the script and screenplay to carry the movie home. In an industry dominated by the Khans and Kapoors, she is once again out there proving that she can run the show on her own. In fact she even puts in a line about ‘speaking English’ as if to throw in a fitting reply to all her trolls.

However, her attempt to do ‘everything’ on her own is also the movie’s biggest folly. Firstly, her additional responsibility of being the stand-in director has affected her onscreen performance. At times in the second half, you witness her going overboard as the intensity picks up. And for all other tricky scenes, you see her getting out of situations with ‘eyeball-popping’ ease.

Everything is written around the central character without leaving any scope for the other characters. As a result, you see despite a support cast that comprises names like Atul Kulkarni, Suresh Oberoi and Danny Denzongpa, it seems much of their work has been left back at the editing room. You experience scenes awkwardly jump from one to another in the first half, and characters popping in and out with not exactly a flow. Even Zeeshan Ayub, who is relatively a reliable showstealer ends up making no impact. One must remember that the role was originally shot with Sonu Sood and once he walked out, Kangana ended up reshooting all the scenes with Ayub. As a result, Ayub’s scenes are all shot with a handful of British actors and never really interacts with any of the key characters except for one key moment, when the heir to the throne is announced.

The less said about the English/Western actors the better. They still end up playing caricatures and still end up mouthing hindi lines even when they communicate with each other. 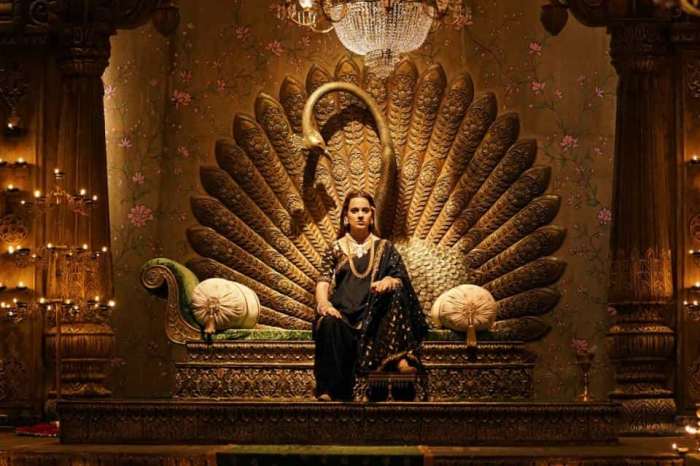 Production wise there is much to be admired here. Despite not having the budget of a Baahubali or the opulence of a Bhansali production, it still boasts of commendable efforts in the set designs and costumes. The fight and battle sequences were also adequately mounted but lacks the creative flourish to make it stand out from the rest of the Indian movies of similar genre.

Music from Shankar-Ehsaan-Loy is functional. Prasoon Joshi’s dialogues seem uncharacteristically overzealous, dripping in national fervor. I am not sure of how much of Vijayendra Prasad’s original screenplay has made it to the screen.  But the final product constantly oscillates between a factual historical drama to a crowd-pleasing fantasy epic, eventually becoming neither.

Whatever the shortcomings, Manikarnika thankfully does not turn into a snooze fest or a silly comedy. The director in Kangana has managed to ensure that the movie avoids being any of that. The fact is in an attempt to make it all about her, she has definitely kept the movie from soaring to any further heights. For now, we get an average movie with a superlative one-woman show. But unlike the imagery in our heads from the history books, this one is not going to remain etched that deep.