Godfather has been an inspiration for filmmakers across the globe. Closer home Mani Ratnam has adapted it as Nayagan. What makes Godfather interesting is that it showcases the human side of the mafia, people who are vulnerable and jealous like us. 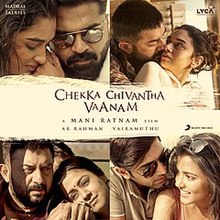 Chekka Chivantha Vaanam is basically a lousy rework of Godfather, with inspiration from Infernal Affairs and New World. The film begins with a voice-over stating how the mafia has spread its tentacles across the various business, this prologue does not add anything to the movie, remember the terrific voice-over from Aurangzeb which set the tone for the movie? Here is just a prologue and it does not add anything to the film or narrative.

The film begins with a murder attempt on Senapathi ( Prakash Raj), and then the rest of the film is a power struggle between his three sons to take over the empire. The problem is that we never see what are they fighting for? Power or Money? We never get to look at what is Senapathi’s realm. The female characters here are just ornamental pieces, all of them are here to die, this is precisely kind of film which Tamizh Padam 2 mocked about how Tamil filmmakers treat female characters in actioners.

Music has always been an integral part of Mani’s movies, and he has generally used the songs in his films beautifully to take the narrative forward, remember Roja or even OK Kanmani, where he started using them as the background score to bring his story forward. Like Kaatru Veliyadu here too the song placement is a mess, the songs which are used in the background do not really set the atmosphere or tone of the scene. Even Sreekar Prasad tries to salvage the situation by cross–cuts in some scenes to create an air of tension and urgency but it does not add overall value to the film, they remain like cool stand-alone scenes. I think any director who has taken us to the living rooms and bedrooms of the characters in a seamless manner has done a fantastic job. 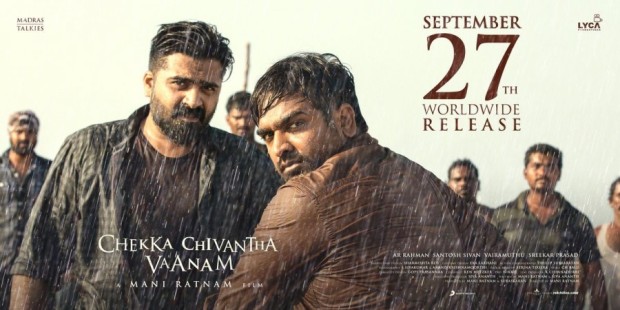 Remember how RGV transported us into the living rooms and bedrooms of the gangsters in Satya and Sarkar. Mani simply fails to do that, all we get is characters smoking JUUL and wearing sunglasses. Even the action scenes we get are dull and drab. In the second half of the film, one role in the middle of an action scene goes on to singing praises of Dubai and how it has developed in the last 25 years, leading to unintentional hilarity.

I fail to understand why Mani wanted three heroes in the film, all three of them are underwritten. We never understand why Vardhan ( Arvind Swamy) wanted to kill his father, he just mentions in a dialogue that he wished to the empire because he felt sidelined. It does not even register a chord with the audience. Juxtapose this with how Ram Gopal Varma showcased the jealousy within the character of Vishnu. Of course, it helped, as Kay Kay Menon is a much better actor than Arvind. Another character Ethi ( Simbu) complains that he never got any attention of his parents, again this just ends as a punchline with nothing substantial to offer from the character.

Vijay Sethupati as Rasool is a hoot to watch and is the only saving grace of this dull, inspired film. Given the underwhelming writing, his revelation of the character as an undercover cop is tame. As an audience we never get to see his inner turmoil as an undercover cop, unlike Infernal Affairs here the stakes are higher as he is to betray his own friend, but then in the cacophony of this script, it does not get any mention. In the end, Mani fails to deliver a decent actioner. It is sad considering he has delivered Agni Natchathiram a good pulp film which had a similar storyline. Go revisit Mani’s earlier movies and give this a miss instead.