Greetings Mr. Kotoky. It pleases us to inform you that your film has been awarded the Treasure Coast International Film Festival award for Best Screenplay. Congratulations!

This email on the morning of 21st of August naturally made us elated. More so because when a festival from other side of the sphere -Florida – acknowledges our script that is firmly based in the soil of Assam, it just reinforces our belief that in ‘Xhoixobote Dhemalite’ (Rainbow Fields..) we are making a global film in Assamese language. We were really happy, but that was not necessarily the best piece of news we have received in via the virtual world in the recent past…

It’s now 2:15 AM, still on road way back home. But it was worth the trip of 1.5 hrs drive one way on a Friday evening in every way!! … Oh.. it’s such a wonderful feeling…no words to express. An Assamese movie…after so many years… in an US theatre…!!
Malabika Bora Brahma

“My early childhood was spent running with my mom and little brother under the cover of darkness, ducking bullets and stressing over the safety of my parents, uncles and grandparents. So much of my childhood was robbed away by the realities of growing up amid violence. I was one of the lucky ones, who was able to flee home but I am still chasing the notion of home and identity. So many others were not lucky and got caught up and became victims and casualties of the political strife. Thank you, Bidyut Kotoky, for telling the story of a lost generation through the eyes of innocent children.”

Rainbowfields is rather intense story about kids growing up in violent Assam and curiosity about Guns. The movie connected with my 10 yr old son who not only sat for whole movie but also asked lot of difficult questions.

“Rainbow Fields” is a creative play of childhood in a backdrop of social turbulence of Assam during the 80s and 90s. Commendable piece of work there!

“In 25 years, my first Assamese movie in an American theater with family and friends. Xoixobote Dhemalite, Rainbow Fields!… I liked the perspective of the non-Assamese residents which in the environment of today’s hyper-nationalism gives the movie universal appeal. At home, the discussions continue for which I thank the director…”

Awestruck to say the least!! Just watched an excellent Assamese movie শৈশৱতে ধেমালীতে (Rainbow fields), for the first time in movie theater in US. The story, direction and performances by all adult and child actors are highly commendable!! It’s so refreshing to see such natural dialogue delivery in an Assamese movie!”

When messages like these greet you on your Facebook wall, you realise that your journey to take the film halfway across the globe was worth it. What more, most of these messages are from people who were total strangers to me, both in real & virtual world till a few hours back … it is a different thing that many of them have threatened to turn into friends in the last few days.

Back, sitting at our home after 3 wonderful weeks at US, I can’t but take this opportunity to thank the co-travelers who made this journey so memorable. The journey started with us winning 3 awards at Love International Film Festival, Los Angeles. Dipannita Sharma got the award for Best Actress, Anurag Saikia for Best Music Score. And Rainbow Fields is adjusted the best film. Winning these awards in a festival where more than 150 films from 36 odd countries have participated felt special – especially because it reconfirms my firm belief that the colour of emotions across the globe is same. And that we have not made just an Assamese film, but a World Cinema in Assamese Language… 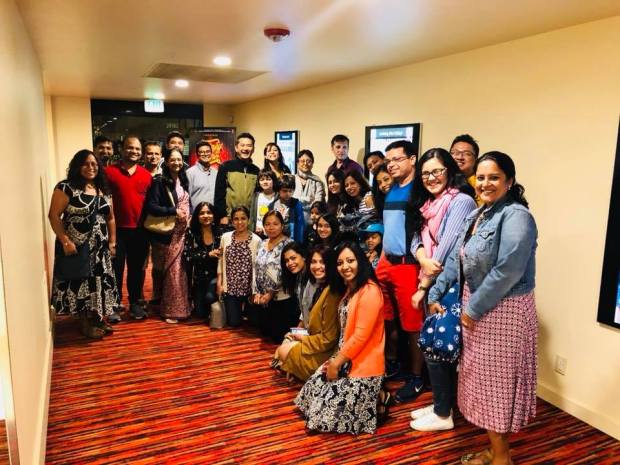 Then we moved on to Fremont, California to release Xhoixobote Dhemalite / Rainbow Fields at Cine Grand cinemas.. another small step in our journey, but potentially a giant leap for the Assamese Film Industry – by becoming the first Assamese Film to be commercially released in US. We continued our journey by releasing the film at Empire Cinema, Colombia Park  New Jersey.. Along the way, we were humbled by the unconditional love & support offered by the strangers who became very good acquaintance and many of whom, I suspect, will turn into cherished friends… Many of them opened their hearts & homes for us.I really felt speechless when audiences traveled for more than two & half hours one way (no, not due to traffic jam but to cover more than 100 miles) to attend our screenings. Deeply humbled when people got emotional after seeing the Assamese alphabets for the first time in silver screen at America or on hearing the Assamese language coming out of the sound boxes of American theatres… and sent me dozens of personal messages sharing their feelings &  emotions,  will carry these moments for a long, long time. Thank you all, for everything!! It is just the beginning of our journey, am sure your love will continue to inspire us as we move forward. Will never get tired on our path or going to give up, that’s a promise

P/s – Seeing those messages on my FB wall while was in California, a friend from Seattle (no, I don’t have the liberty of calling him anything but friend, thanks to the long associations we share & him being there for us) Satyajit Nath da send a message: “ it is only apt that a California born poet’s (Robert Frost) composition be perfectly fitting for this wonderful moment in your steadfast journey…

I shall be telling this with a sigh

Two roads diverged in a wood, and I—

I took the one less traveled by,

And that has made all the difference.”

I am a dreamer, who makes films to live those dreams... View all posts by Bidyut Kotoky