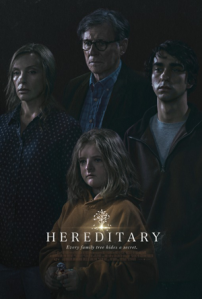 Before writing this review, I need to put in a disclaimer. I have developed a prejudice against horror films off late. Most of them seem to exist for the sole purpose of creating jump scares. Their entire plot revolves around a common trope – a spirit that terrorizes. To this, there will be variations: an evil spirit, a vengeful spirit, a shape shifting spirit. Then there will be some tweaks to this formula in terms of the setting: a jungle, an old desolate house or even in terms of how the spirit switches hosts. Having said that, there are a few movies that excel because they find a different voice even within this rubric. The Sixth Sense, Let the Right One In, The Omen or Rosemary’s Baby, just to name a few.

Hereditary aims for that level of greatness and very nearly manages to achieve it, but is ultimately let down by an overwrought plot. I bet that after you have seen the movie, you will be googling a few keywords, trying to make sense of what you have just seen. Not a good way to treat your audience.

The Grahams are a family of four consisting of parents Toni Collette and Gabriel Byrne and children Alex Wolff and Milly Shapiro. Towards the beginning we learn that they have just lost Collette’s mother who was staying with them during her last days. I’ll reveal no more as this is one of those films where shocking plot developments keep propelling the film further.

The most laudable part about Hereditary is how it gradually builds dread by preying on your mind. Quite a few of the usual horror staples like a disturbed grave, sleepwalking or a reticent kid feature, but they are skillfully woven in into the plot, so that don’t stand out like clichés. Aster beautifully avoids chronic jumps scares for the sake giving the heebie jeebies to the viewers, this despite the fact that there are plenty of possible moments to pull these stunts. Instead he does something much more difficult, he holds your attention, making you strain your ears to catch every word that is spoken and squint your eyes to interpret every new prop that pops up on screen. 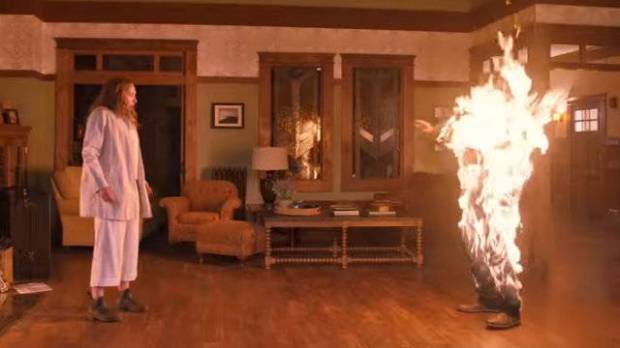 Along with Aster, credit for this must be shared by cinematographer Pawel Pogorzelski and Colin Stetson for the apt background score. A thumb rule for horror movies is that scenes shot in the dark will have your stomach churning and respite shall be available during day time scenes. With not a single shot wasted in contributing to the atmosphere, this rule is very nearly thrown out of the window.

Toni Collette is in top form, even getting in a reasonably long outburst scene, the kind that makes award juries stand up and take notice. Alex Wolff as her weed smoking son who has a troubled relationship with her holds his own against a heavy hitting Collette. Milly Shapiro as good too as the creepy daughter. It’s Gabriel Byrne who sadly takes a backseat as the underwritten character. As the movie progresses, he behaves more like a character in a horror movie rather than a reasonable person from real life.

For a first feature, Aster displays amazing control over the medium. There are a few times where the mis-en-scene is brought alive through a single fluid movement of the camera. Any other director would have broken down the scene into multiple shots from different angles. For this and many more technical accomplishments, watch Hereditary. Now if only the story was more up to speed.

View all posts by ghiadevang