Skip to content
After the humongous response to Prabhas’ Baahubali franchise in the North, his upcoming film Saaho remains highly anticipated. Bollywood producer Bhushan Kumar has now joined hands with UV Creations, one of the leading and most successful production houses in the south to present the film in Northern markets of India.
Bhushan Kumar’s T-Series has inked a deal with UV Creations to present Prabhas’ Saaho to the Hindi audience. Marking one of the biggest collaborations in the Film Industry, the deal of Prabhas’ next. 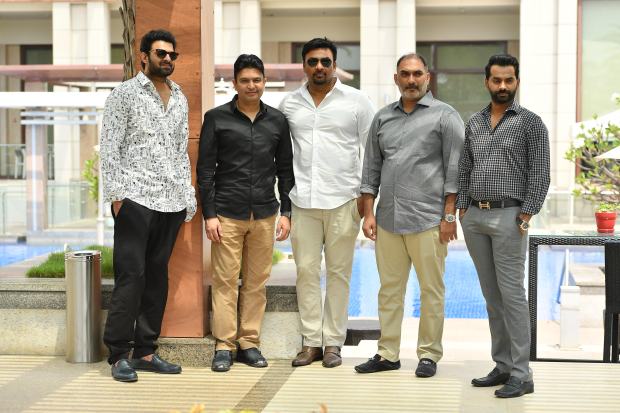 The collaboration marks the coming together of two of the most celebrated production houses of the industry, to deliver to the audience an ultramodern action flick with Saaho.
The film which will be Prabhas’ return to the big screen after the record-shattering Baahubali: The Conclusion, is much anticipated by audience across India.
The makers of Saaho are leaving no stone unturned to make Saaho at par with their magnum opus vision, bringing together the best filmmaking and creative minds of the business together.
The film is being filmed at striking locations in, around and outside the country.
The expert team of director of photography Madhie, versatile editor Sreekar Prasad and production designer Sabu Cyril are brought together to do a spectacular job with the film.
Saaho will showcase high-octane action sequences for which the makers have roped in a world acclaimed action choreographer.
With Saaho being a trilingual, one of Bollywood’s most celebrated film maker’s Bhushan Kumar will be presenting the film in the Northern Hindi markets. Speaking about the collaboration, Bhushan Kumar said,  “The universality of Saaho is what appealed to me as a filmmaker. While Prabhas is a pan India star, the content and its treatment will make for a film having a global appeal. It is an exciting collaboration and we are looking forward to presenting the film to our Hindi audience.”
Superstar Prabhas said, “Ever since its inception, Saaho has been larger than life story. We want to present our audience with a memorable visual experience.”
The teaser of Prabhas’ Saaho had released with Baahubali: The Conclusion, the first glimpses of the film treated the audience with a futuristic theme while showcasing Prabhas in a badass avatar.
Saaho will bring to the big screen an ensemble star cast of Prabhas, Bollywood actress Shraddha Kapoor, Neil Nitin Mukesh, Jackie Shroff, Mandira Bedia, Mahesh Manjrekar and Chunky Pandey.
Presented by Gulshan Kumar’s T-Series & Bhushan Kumar, a UV Creations production, ‘Saaho’ is produced by Vamsi and Pramod, Written and directed by Sujeeth, ‘Saaho’ will hit the screens next year.