Mumbai-based director Bidyut Kotoky’s Assamese film Xhoixobote Dhemalite (Rainbow Fields) is one of those movies that come across as so deeply personal that you are certain that the events unfolding on the big screen must be, in one way or the other, autobiographical in nature.

The autobiographical elements are not difficult to spot with the protagonist Niyor, played by Nakul Vaid (of Ab Tak Chappan fame) being an Assamese filmmaker himself, based out of Mumbai. Bidyut Kotoky has also dubbed the voice of the protagonist, giving the film a further personal touch. It feels as if the director is quite literally narrating a story, but in an audio-visual form.

Xhoixobote Dhemalite is about how violence deeply impacts the impressionable minds of innocent children. Set mainly in the 1980s of Assam when the North-Eastern state witnessed violence that left about 1,800 people dead. The focus here is not so much on the reason behind the riots, but on how children are always the worst victims of them.

The film begins in present day Mumbai, with Niyor getting deeply disturbed after a letter tells him of his childhood friend Pulak’s death. He has totally lost any touch with his roots, but now, with the sudden demise of his best pal, he’s getting irresistible drawn to his homeland. As he’s on his way back to the evergreen land of Assam, some haunting memories from childhood keep coming back to him.

When Niyor was a curious 10 year-old kid and on his way to school in a car, he along with his younger sister Kuwoli were witness to a violent mob which sets huts on fire and even hacks people to death. Kuwoli goes in a state of shock, but is fortunate enough to have a theatre-artist as her grandfather who manages to convince her by bluffing that what she saw was not real but a film shoot. But Pulak who’s the son of a local driver, isn’t so fortunate. Riots are rampant in the strife-torn region and a violent student agitation is simmering. Niyor, inspired from his grandfather, wants to set a realistic play involving Pulak and other boys of his neighbourhood. They somehow manage to get their hands on a real gun which is accidentally fired when they are rehearsing their ‘realistic’ play. The event changes the life of Niyor, with him being sent off to boarding school by his government servant father, but the underprivileged Pulak, to whose house the gun is traced and his cousin found involved in the student unrest, suffers from much worse consequences. 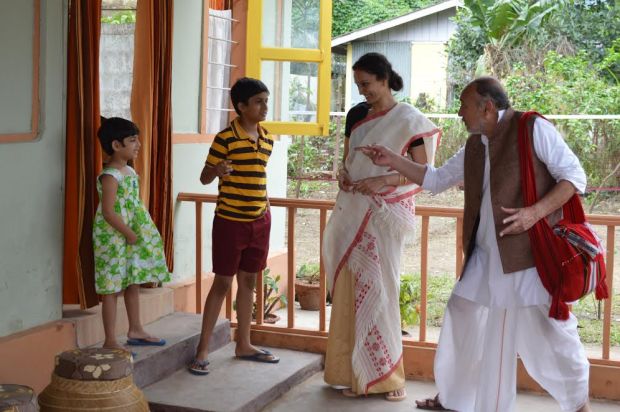 The whole world of the Xhoixobote Dhemalite is drawn with such warmth and detail that only a person who has lived through those scenes could have done so.

Bidyut Kotoky’s film also has a beautiful simplicity to it. Despite there being some emotionally charged scenes, the proceedings never get melodramatic. Even the violence is shown with no bloodshed. The scene in which the children talk about counting upto 40 dead bodies in the local river after a massacre, sent a chill down my spine. There’s also a commentary on how your class plays a major role in deciding your fate in violence stricken lands. But all of these sensitive issues are handled with a subtlety and care that is hard to find, these days.

A lot of the film’s impact depended on the performances of the many children in the cast and all of them win our hearts. Kotoky as well as the casting director deserve special kudos for extracting such affecting performances from the kids. The innocence of these children is brought out really well by the screenplay. The cinematically unexplored land of Assam is rather evocatively captured.

Now, the north-eastern states still remain on the periphery of mainstream India’s sub-conscious. Our bigger film industries are no different. The gorgeously green Assam has been criminally under-represented in the vibrant film industry of our nation. What heartwarming films like Xhoixobote Dhemalite that are strongly rooted in the land of Assam also do is that they make audiences like me aware about the state and make us more empathetic to the people there.

But, most importantly, Bidyut Kotoky’s film throws light on the cruelty of violence, especially that on children. By narrating a rather touching tale it convinces us about how be it Assam, Syria or any other strife-stricken land, it’s the children who are the most adversely impacted by the violence witnessed by their young minds. If not for anything else, we should strive for peace just so that the young minds grow into understanding adults without any permanent scars on their psyche.