Before I begin, let me say that in this review (to some it may seem an elaborate rant, but I need to give vent to my headache at spending big bucks for this movie), I may not make much effort to hide spoilers for 2 reasons – Firstly, as everyone knows the story from school history lessons or if you were not paying attention, I’m sure the Karni Sena would have ensured you now know everything there is to know;  Secondly, most who wanted to watch the film for whatever reasons would have already done so by now, and those who are yet to watch should be allowed to save their time and money.

Oh Mr.Sanjay Leela Bhansali, how do you continue to have the ability to make such bombastic crap that looks so aesthetically pleasing, but crap nevertheless? After Black, for 15 years our senses have been bombarded and eyes penetrated with colors, elaborate visuals, colors, even more elaborate dance sequences, colors. With such an overdose on the senses, the brain ends up taking a back seat. You are truly the patron saint of producing high quality flatulence, with a burst of cloves and sandal for perfume. With such an exemplary track record, when your latest project came up, with a budget of INR 190 crs (making it the 2nd most expensive Indian film released till date), more of the same was expected. However, in this instance, there was bombast even before the film was released, thanks to events of which I won’t delve much into. 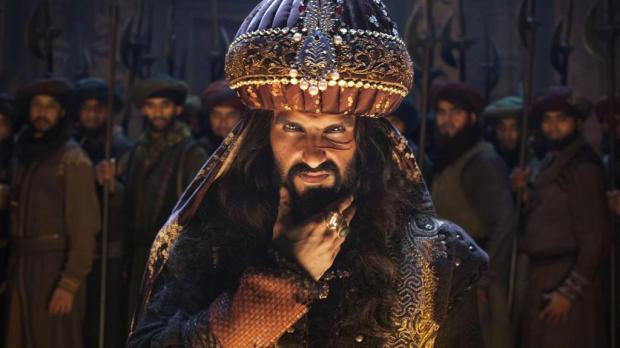 The basic plot, as I said, is something everyone is aware of. Since the actual events themselves don’t have any historical backing (many Historians claim the epic poem Padmavat by Sufi poet Malik Muhammad Jayasi was a figment of imagination), it can probably be pardoned that the film took liberties with the story. But, while the story is a legend, it does involve certain real-life characters, not the least being Alauddin Khilji himself, so there is an element of responsibility for the film-maker in terms of depiction. But more on that later.

Having seen the film, I truly can’t believe all the hullabaloo raised on Rajput pride by various sections of the population, without even having a clue with regards to the film’s content. In reality, this film couldn’t have been a more bloated advertisement on Rajput valor (and lack of common sense), all told with perfectly somber and leaden faces in slow monochrome dialogues accompanied with booming background sound that would put Saas Bahu serials to shame…Purrfect! Sample this dialogue “Chinta ko talwar ki nok pe rakhe wo Rajput, ret ki naav le ke samundar se shart lagaaye wo Rajput, aur jiska sir kat jaaye phir bhi dushman se ladta rahe wo Rajput” (And believe it or not, to justify the dialogue, we even have a scene of a headless Rajput swinging away at the enemy). Now as audience you have the option to squirm, break into laughter, roll your eyes or put your head between your legs, wishing you were at home watching the Australian Open or the India-South Africa Test series.

Ironically, if anything, the descendants of the Khiljis could be pardoned if they had waged an angry protest at the very biased and stereotyped depiction (just so you know, yours truly doesn’t claim any responsibility if they were to start protesting now!). Alauddin Khilji (portrayed in madcap fashion by a bombastic Ranveer Singh on steroids) seems to be nothing more than a ravenous, gluttonous, immoral rapist, who loves to gobble his chicken, and is always dirty faced, even in bed. Maharaja Ratan Singh, on the other hand, is always very clean, even in battle and makes sweet, elegant love while in bed. But back to the “monster” Alauddin Khilji, just because you give a 10 second disclaimer announcing that it’s a work of fiction, doesn’t mean you can get away with a complete lampooning of a historical character. Unfortunately, most commercial Bollywood likes to portray stories as battle of good vs. evil and reduce characters to black and white. Does that warrant though to put up such blatant demonization of one set of characters so as to drill the idea of good vs. evil into the audience’s mind? Yes, he was ruthless and treacherous to his uncle for the throne. But, there is a reason why he was the most powerful ruler among the Delhi Sultanate, has been credited with land reforms and was able to drive out the mighty Mongols from invading India. Irrespective of all that, even if he were to be an absolute villain of history (and there can rarely be absolutes among real-life characters), it can be better portrayed with more subtlety. It was almost unbearable to watch Ranveer Singh suddenly dance to “Khali Bali” like an ox in heat (refer sample pic). It wasn’t even a demonization of a character, it was more of a lampoon. It was sometimes so bad that it was funny. I won’t go into a lesson in history, but let me just say that a film-maker cannot use poetic license as an excuse to do such lazy, one-dimensional story-telling where there are no nuances of characterization. It’s just plain poor, irresponsible script-writing. Through 2.5 hrs of stereotyping crap, the filmmakers have managed to create a bigger antithesis between the “righteous Hindus” and the “barbaric Muslims” than any Hindutva propaganda can achieve in years. Its not surprising that the film ends with as propagandist an announcement when the narrator solemnly proclaims that Padmavati’s valorous act of Jauhar was the biggest defeat of Alauddin, a “victory of Truth over falsehood”.

In the department of acting (that is if you get a chance to see some amidst a sea of colors and visuals), Shahid Kapoor’s Ratan Singh comes out as the leaden eyed lecturer of Rajput principles and values (every dialogue of his is like a teacher explaining Rajput valor to a Primary school kid), Deepika looks elegant but is content looking nice (what else could she do, would Bhansali even bother to showcase her acting qualities?), but Ranveer was a different animal altogether. If the Rajputs don’t seem to emote much, they are more than compensated by one of the most bombastic, over the top performances of a historical villain in a Bollywood soap-opera. To be fair to Ranveer, I’m sure he did what he was instructed to. Considering how his character is lampooned in the movie, I will say he at least does a good job executing what he has to. He commands most scenes, nay he practically eats up most scenes he is in (just like his table manners gobbling chicken), either through nasty stares, manic laughter, incredulous grimaces and just well, being a psychotic sexual predator who seems to be perpetually on drugs. Having sex with another woman just before marriage and then murdering someone from the bride’s family for being a witness, pouring scent on the maid and then rub her over himself for added pleasure, and in general being a clownish Bisexual predator with a perennial thirst for blood, just another day in the office for our charismatic Delhi Sultan.

In the department of Song and Dance, as expected the set pieces and choreography is very elaborate and aesthetically like a million dollars. Deepika Padukone truly is the superwoman in the film, not for the brave act of Jauhar by her character, but for pulling off dances moves while wearing jewelry probably more than her weight, it’s a miracle she didn’t end up having spondylitis or have her nose ripped off by the Nose ring that covers half her face. At other times, when we do get to see a glimpse of her, she exudes elegance, Oh why did they have to put so much jewelry! Barring ”Ghoomar”, which people would have seen a million times on TV even before the movie was released, most of the other song and dance sequences are tacky and as abrupt and out of place as Rohit Sharma on a seaming overseas test wicket. There was one scene where Alauddin dreams of Padmavat but sees his “slave”, the homosexual Malik Kafur eyeing him. What could have been an interesting chemistry at play between the 2 suddenly turned into a lame-ass romantic number which ended with Alauddin’s much abused wife trying to seduce him to bed. The whole scene was so corny, so out of sync and out of character that I was really hoping it would be revealed to be just a dream of Alauddin’s. Alas no. A side of me wishes that the lame sequence had to be forcefully inserted as a replacement for the now notorious sequence of Alauddin fantasizing about Padmavati (which got censored), and the makers had run out of alternative ideas.

In the end though, I’m not going into the liberties taken with history, I’m not going into the hackneyed stereotyping of individuals and cultures, I’m not even venturing into the glorification of a practice which seems regressive now but might have been construed as valorous in a different era with different sensibilities. In the end, the film just seemed another pompous output, devoid of feelings, emotions and characterization. Like a hot air balloon, it felt hollow, as an audience I honestly couldn’t give a damn about the sacrifices of the Rajputs. The climactic Jauhar scene, as expected, was artfully depicted and grandiose, but while I was moved by the visuals, I did not have similar feelings for the act or the characters. What was the filmmaker thinking, that by including a shot of a pregnant wife in the Jauhar scene would provide brownie points for enhancing the valor in the scene, or make the scene more tragic? Neither was I moved by the bravery nor was I touched by the tragic circumstances of the characters, I simply squirmed. In Alauddin Khilji, the filmmakers had a chance to make an intriguing character, flawed with shades of grey, what we got was a lampoon. Ranveer Singh tries his best to make the bombast, well, at least look bombastic. But being the best in a poor play doesn’t amount to much. And coming to the length of the film, yes it was a long-drawn snooze fest. If the 1st half seemed bearable, shit hit the fan in the 2nd, and the fan was running at top speed!

In conclusion, thanks Sanjay Leela Bhansali for continuing to have the ability to make such aesthetic crap, complete with incense and a generous smattering of sindoor and gold. And the biggest CV point of the protesters would be if they can make a hit out of this cow dung (but then we respect cow dung, so it’s cool!).

View all posts by pathikritbasu