Is it the “curse of over exposure” or unbridled passion for the medium?, Which holds true for the maker as well a casual reviewer like me that one can spot influences all around, right from the first frame. At times it seems that all creative art forms are in this constant passage through ages taking the shape of contemporary values, interpretations, versions of entertainments and influences; And then there are some that leaves such strong impact for a very very long time, and across many future generations that eventually changes the basic definitions of grammar transforming a proper noun to adjective ; (case in point Orwellian, Tarantoinsih, Kafkaish….et.al) leaving in the process an everlasting creative ripple. 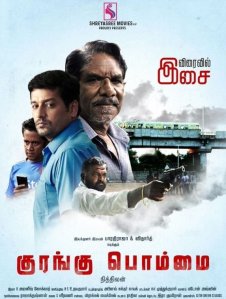 I for one suffer from this subconscious knack of connecting references to all past impressionable long lasting collective experiences that just crops up at the very outset or sometimes in near real time and most often in hindsight with perpetual recalls until it can relate to, this then leads to a rush of fond and everlasting memories. With this involuntary tendency of extremely curious mind as mentioned earlier right at the very beginning I saw Michael Madsens coldness of kidnapping a cop from the site of failed heist. I felt the ritualistic and spooky coldness of Javier Bardem from No Country For Old Men, or say Anurag Kashsyapish sic. characters (Ugly, GOW) , even the musical score’s, which in turn is a quiver of the ripples originating from its inner spheres i.e. Scorscese, Tarantino, Coen-Brothers, It never ends and the farthest you can reach to the deepest core largely looms around say Kurosawa , In this case at-least that stands true for me. I recall how Mr. Tarantino in one of his forewords had mentioned how he never writes a story but characters and then they all connect and how the characters emerge until it turns in to full blown Script / Screenplay. Similarly I feel the current breed of young filmmakers exhibit bursts of superior quality of rare talent which rarely delivers an complete and a worthy experience , Not every one is as talented or inspiring as Mr, Brown;

One of the primary and fundamental aspect of a good script is that during the course of progress it turns itself in to a character, and a well written character boasts of a very crucial element which is consistency (Not referring to Non-Linear nature of the ScreenPlay here). Kurangu Bommai fails miserably on these specific aspects. I do understand the challenges with the current global phenomenon of diminishing attention span but that does not give us the liberty for half baked characters, when in a script like Kurangu Bommai the life of the script is completely dependent on it. Relation ship between Bharathiraja’s character and that of his master is ironically unexploited.

There are times in the movie when some scenes looks straight out of any regular Tamil primetime Soap. Except for two to three scenes the father-son relationship is never established, (which could have been explored if not for the unavoidable and customary staple Tamil cinemas romantic / comedy track in this case a very weak black comedy track). Nowhere during the whole film the intellectual disability or congenital handicap of Bharathiraja’s character is emphasized clearly except being reflected in a monologue of sorts.In fact my whole initiation of watching the movie started off by watching that very same scene shared by someone with high praises as a Facebook post.. On hind-sight I find it as a complete misfit given the whole characterization of Mr Bharathiraja. On the brighter side the creative bursts are abundant mostly in the form of the excellent performance by the antagonists, Some mind blowing sub-plots, well written dialogues and subtle passive actions, movements or consciously impressive inactivity in the background.

Casting is brilliant except some very badly written / performed characters , to build a character with dark humor without it turning in to a absolute caricature is a rare talent and demands mastery in the craft. Across the film ingenious shots of children’s forms a powerful narrative specially in the background to the extent that one of the lollypop sucking character gives you a feeling that it was meant for a child and if not for the blunder of the casting director any of the amazingly talented children in the movie could have effectively executed it.

Overall an effort worth praising and commendable for the sheer fact that it stands-out from the influx of thrash that’s produced with such enthusiasm in the name of Cinema and Entertainment.