It is funny how the making of the original Ittefaq back in 1969 came about due to an unfortunate coincidence, an injury to the leading lady of Aadmi Aur Insaan, Saira Banu, leading to her leaving for London to recuperate for 2 months. Owing to this unforeseen delay, Yash Chopra figured he had to make a movie within 2 months, and after coming across a Gujarati drama, Dhoomas, adapted from a famous English play, Signpost To Murder, decided to adapt it to the big screen with a then-upcoming Rajesh Khanna and the reigning matinee queen, Nanda. Almost 50 years later, BR Studios comes out with yet another songless crime-thriller, but the question remains, is the title the only similarity to the original?

When the policeman Dev Verma (Akshaye Khanna) is rudely woken from his sleep in the middle of the night, little does he expect that he will be pulled into what might just end up being one of the most challenging cases of his career? Two murders, two different locations, and two suspects. The first of them, a successful writer, Vikram (Siddharth Malhotra) who claims he was just in the wrong place at the wrong time, the other, a seemingly innocent homemaker, Maya (Sonakshi Sinha), who claims to have been brutalized by Vikram, but seems to have a few secrets of her own.

Wilting under the extreme media scrutiny and the added weight of Vikram being a British Citizen, Dev has to crack this case within 72 hours, but when both suspects claim their innocence vehemently, the question is, who is guilty? 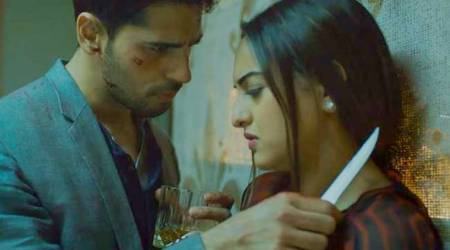 Debutant director, Abhay Chopra does a pretty decent job of living up to the reputation of his illustrious father and grandfather, as he and the cinematographer Michal Luka draw you into the gloom of a Mumbai struck by a heavy monsoon. But while BR Chopra and Ravi Chopra had legendary writers like Dr Rahi Masoom Raza, Akhtar-Ul-Iman etc writing heavyweight scripts for them, Abhay who is also one of the co-writers of the script along with Shreyas Jain and Nikhil Mehrotra is unable to match up to their standards.

For a murder mystery set against a ticking clock, Ittefaq is surprisingly slow to take off and even when it does, lacks the depth to keep moving for long, and if a movie that’s barely a 100 minutes long can have you shuffling impatiently in your seat, then it really doesn’t reflect well on the writing.

Performances wise, it’s Akshaye Khanna who is the pick of the lot here. As the eccentric cop who is obsessed with details, it’s quite evident that he is having a lot of fun with a role that he can really sink his teeth into, which he does. And that’s why it’s such a pity that the 2 other leads, Siddharth Malhotra and Sonakshi Sinha turn in such lacklustre performances, so much that every time Khanna is not on screen, the mind wanders.

To sum it up then, Ittefaq is a murder mystery that could have done with a lot more tension, and a lot fewer tears.