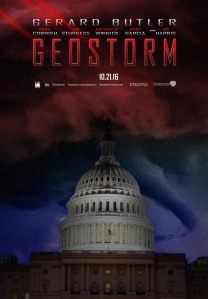 Geostorm is a forthcoming American environmental disaster science-fiction film co-written, produced, and directed by Dean Devlin as his feature debut. The film stars Gerard Butler, Jim Sturgess, Abbie Cornish, Ed Harris, Katheryn Winnick, Robert Sheehan and Andy García. The film is about a satellite designer who tries to save the world from a storm of epic proportions caused by malfunctioning climate-controlling satellites.Electric Entertainment and Skydance Productions are producing the film, to be released by Warner Bros. on October 20, 2017. Re-shoots were scheduled in December 2016 under executive producer Jerry Bruckheimer and director Danny Cannon.The film is also known for being the first co-production between Skydance Media and Warner Bros.

Check out the trailer here-