I write this after a successful show of my second film, Local Kung Fu 2, at Fun Republic in Andheri (W), Mumbai, organized by 1018mb.com. And I somehow get the feeling that I would never want to make anything that I can’t sit and watch and laugh at with a bunch of people in a theatre. That’s my drug: hearing people laugh. If strangers who’ve paid money to watch are laughing, even better. If it’s kids who’re laughing, better still. Because kids aren’t diplomatic. They won’t fake laughter or a polite chuckle to please you. When kids laugh during your film, you know you’ve succeeded. (Unless the film was supposed to be a tragedy)

Faking it with hyperediting and earthquake cameras

The most irritating thing about many fights today is that when the actor doesn’t know martial arts or can’t be bothered to practice enough, they make up for it by shaking the camera around and cutting 6-7 times for even a simple punch and fall. In other words, if you can’t convince the audience, confuse them. One remarkable exception in Hollywood is Tom Cruise’s fights in Jack Reacher (the first one). Camera steady and at a distance, so you can clearly see what’s happening, and several moves in one shot, instead of several shots for one move.

And every fight fan should watch Haywire, directed by Steven Soderbergh and starring women’s kickboxing champion Gina Carano. Superbly choreographed, realistic fights with all the elements of modern fighting including Jiujitsu; clean, steady camera work; and they actually turn off the music in the fights, so even that extra masala is not there and you can appreciate their genuine intensity.

A curious thing is that films in the 70s and 80s always showed fights in wide, clear shots. No trying to create fake intensity with shaky cameras. Some time ago, I happened to see a couple of Amitabh Bachchan fights from the 70s, and noticed that even though the fights look quaint by today’s standards, the camera was always at a respectable distance for us to see things clearly.

How we choreographed our fights for Local Kung Fu 2

All the best fights have a storyline. There is a graph that generally goes through feeling each other out, then the hero might win a few exchanges, then the villain gets the upper hand, hero almost loses, hero figures out a weakness, and hero defeats villain. Generally speaking. Sometimes it could just be one guy bashing up a bunch of guys in a one-sided contest. It’s up to the choreographer and director to figure out possible variations and how to bring freshness into the fight.

Utkal Hazowary, lead actor in LKF 2, is a teacher of Wing Chun Kung Fu and also has a wide repertoire of Taekwondo kicks, so those would be his primary fighting styles. I, on the other hand, am not as flexible as him, plus I’ve been practicing grappling for a couple of years now, so I decided that my primary fighting style would be wrestling. Most people don’t realize this, but the wrestling-style fighting arts (like Brazilian Jiujitsu, Sambo and Judo) are the most practical for real-life fighting. In real fights, people don’t stand at a comfortable distance and throw kicks and punches. There’s grabbing and shoving and headlocks – which one at the very least needs to know defenses against. 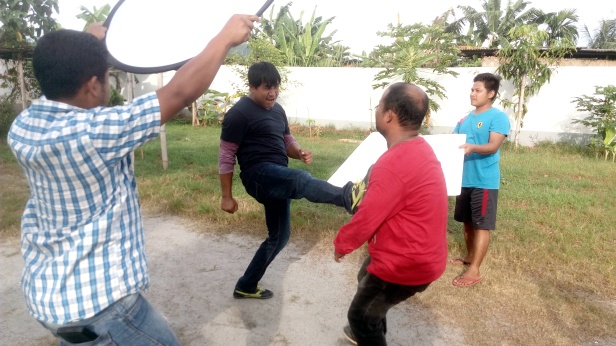 In the climax, Utkal has two one-on-one fights with Bibhash’s and Uncle’s characters. Since both of them have been Uncle’s students, they were all familiar and comfortable with each other’s moves. I let them choreograph as they pleased, then reviewed what they’d composed and tweaked it to suit the storyline within the fight and also add some funny moments. One of the biggest laughs in the film comes when Bibhash grabs Utkal’s leg and takes him to the ground, and Utkal uses every free limb to attack him.

Most of the time, the choreography of a fight itself dictates which angle to shoot from and how many moves can be taken from that particular angle. For instance, a punch from one angle could look like it hit, and from another angle it could be very obvious that the fist is a foot away from the target.

We tried to keep shots to include as many moves as possible, but if move number 9 was a little dangerous, we’d only shoot till move number 8 and take 9 in a separate shot. This especially held true for Montu’s gymnastic-style kicks. In fact, we did a lot of R&D before the shoot begun on what would be the best and safest camera angles for some of his amazing kicks. You can’t do these on set. Not only are the potentially dangerous, they involved accuracy from both fighters and camera, and there is also a physical limit to how many takes of a gymnastic shot a fighter can do without getting fatigued to the point of making an error.

Choreographing the final fight between me and Montu was quite a challenging and interesting process, especially because our on-screen fighting styles were poles apart – mine was stick-to-the-body wrestling and his was Muay Thai and Taekwondo and tricking. I spent a lot of time learning and practicing freestyle wrestling takedowns, and how one could make an entry against a striker. Over several sessions of choreographing and rehearsing, we managed to put together a fight that’s representative of both our styles. (Although, when I look back now, I’ve learnt quite a bit more about wrestling and I can see many newbie mistakes I made.)

Making an action film is no joke. There is NO way in hell you can give an actor a 3-week crash course in martial arts and expect them to pull off an action film. The moves will look utterly fake and unconvincing and will have to be disguised by lots of stunt doubles and shaking cameras and hyperediting. Much better to take a fighter who’s trained all his life and surround him with decent actors, which is what the Ong Bak and Tom Yum Goong films did with Tony Jaa.

Local Kung Fu 2 can be watched online at https://www.moviesaints.com/#!/movie/local-kung-fu-2