‘Golden Period of Marathi Cinema’, ‘Marathi New Wave’ are some of the fancy labels that are attached to contemporary Marathi films by bloggers (including, yours truly) and other movie enthusiasts. But the reality couldn’t be farther from it. Yes, there have been few gems that have released every year, but that’s about it. The average quality of Marathi films that release in a year are as low as any other regional industry in the country. Alarmingly, nearly all of the Marathi movies that released in 2016 were declared as commercial duds.

Fortunes haven’t changed in 2017 either. The first 5 months have been particularly woeful. Two Zee movies (Ti Saddhya Kay Karte & Chi Va Chi Sau Ka) and a Swwapnil Joshi-Subodh Bhave flick have come and gone without making any significant impact. It has taken a ‘small’ film like Muramba to finally help the industry get out of the rut of mediocrity.

If you have been following the promotions of Muramba, you would think it’s a romantic comedy with a fresh plot, a bunch of modern, liberal characters, and some long, satisfying conversations. Well, it is exactly that and full marks to the promotional team as it is not often that a film delivers what it promises. 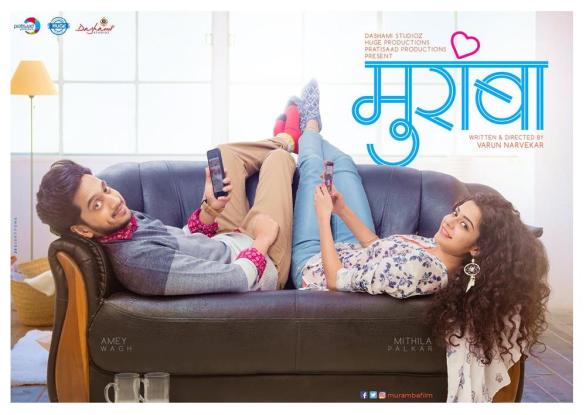 Marathi cinema has a long list of movies that look and feel like ‘recorded plays’, and in the hands of a lesser screenwriter and director Muramba could have very well been the same. The broad structure of the movie is indeed like a play, but writer-director Varun Narvekar’s deft hand ensures that it doesn’t feel like one despite it primarily being a movie about long drawn conversations between a few main characters.

Movies with a lot of talk don’t make for excellent cinema. You need to be really skilful to make the cinematic experience engaging if you have a bunch of characters that do little other than talking. Alok and his parents speak in their luxurious Pune home; they talk in their big luxury car as well as the restaurant they visit for a family lunch. It is Varun Narvekar’s fine cinematic eye in staging the scenes that ensure they don’t come across as drab. The casting of the three most important characters couldn’t have been better. They share such a real bond that at times it feels like you are eavesdropping on a real dinner table conversation of a family. Sachin Khedekar as the calm and collected patriarch, who is discreetly steering the patch up of Alok and Indu, is exceptional. It is definitely one of the better performances of his long acting career. Amey Wagh shows that he is one of the most promising actors from the younger lot of the Marathi film industry. Chinmayee Sumeet as the gentle mom who is brought up in a village but has, with some difficulty, adopted to modern and liberal urban environment is pitch perfect.

Mithila Palkar’s Indu gets a much shorter screen time, but again the well-structured screenplay ensures that her side of the break-up isn’t underrepresented, neither does her character seem underdeveloped. Though Mithila looks the part, her performance pales in comparison to the other three actors, and so her short role works in favour of the film. The portrayal of Alok and Indu’s relationship, and the cracks that develop in it has to be the most realistic in Marathi cinema in the recent past.

Alok’s inner conflict which is the root cause of the rift between him and Indu is a little unconvincing. But otherwise, Muramba is a confident debut by writer-director Varun Narvekar. It is a fresh and engaging romantic drama held together by endearing performances by the ensemble cast. Definitely worth your time and money!