Nocturnal Pictures are proud to announce that after 3 years of hard work, Max Payne Retribution an Action/Thriller fan film now finally has a release date of the 24th June 2017. 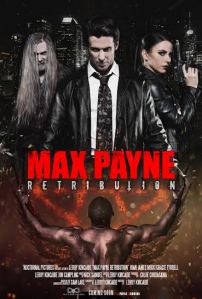 Nocturnal Pictures premiered the film in London on 25th May with the cast and crew, along with journalists, critics and other industry professionals such as Rachael Downie who hosted the Red Carpet.

Max Payne Retribution is a 45 minute short fan film, which is based on characters and elements from the Max Payne video game franchise. It’s a film noir love story with hard hitting gritty action scenes tangled between a dark world of devil worship.Director Leroy Kincaide wanted to keep the videogames true essence in the film, such as the bullet time and Max’s dark troubled past, but also introduce some of Nocturnal Pictures dark cinematic style of production.

A non-game character Jon Campling stars in the film as “Curtis Draven” as a follow up to his recent film Final Fantasy Kingsglaive where he was a motion capture model for “King Regis”. Along with Joan James Muixi as “Max Payne”, Leroy Kincaide as the main villain “Jack Lupino” and kick ass assassin “Mona Sax” was played by Gracie Tyrrell.

As the film was made by fans for fans, the release will be online only on the Max Payne Retribution YouTube Channel on the 24th June. However there are rumours that Nocturnal Pictures are looking to discuss development of the film with Take Two Interactive who hold the copyright to the Franchise, if they get enough backing from fans, this could potentially be developed into a TV Series.

“ We are using this film as a great platform/stepping stone for Nocturnal Pictures to show the independent film world what we can do with such limited budget, and use this as a means to raise investment for the two feature film projects we have in development which will be full theatrical releases” – Chloe Chudasama Nocturnal Pictures.

The film has been in the making for the last 3 years, producer Chloe Chudasama and director Leroy Kincaide started working on this short fan film back in 2014, they raised £1500 on indiegogo and made the whole film on this budget. All cast and crew donated their time to be apart of this passion project. A highlight of this film is the choreographed action scene in the film which was shot over 2 days totaling 20 hours, with 14 cast members and a total of over 250 individual takes.

Max Payne Retribution is a masterful tribute to the game that oozes a sense of earnest appreciation rarely seen elsewhere. The short time spent in the realm of vengeance and revolvers is thrilling and dynamic from start to finish, easily flooring other efforts with finesse. It’s been over 15 years since the first Max Payne was released, many thinking the noir of gaming had simply vanished with Rockstar’s third instalment in 2012. Here we see new life breathed into the aching world and hauntingly real characters of Max Payne, and it’s a rejuvenated world that needs to make a return.