Deconstructing a genre can be tricky. Especially when it comes to a crowd-pleasing genre, like the standard rom-com. When you observe the trajectory of a typical rom-com, it seems simple, comforting, something you’d go for, on a lazy weekend after a hectic week, like a mug of chilled beer and a steaming plate of biryani. Therefore when 500 Days of Summer came along and ended up subverting most tropes we’ve come to expect, it was a hell of an experience and therefore ripe for adaptation in Bollywood. So when the promos of Meri Pyaari Bindu turned up, one did feel the spirit of 500 in it, so the question here would be if MPB is an apt deconstruction of the genre, or just another run of the mill boy meets girl tale?

Abhimanyu Roy (Ayushmann Khurrana) is a banker turned novelist who is famous or rather infamous for being a writer of pulp fiction, exploitative, and titillating in nature. Grappling with writer’s block, his attempts at isolating himself from the world are mostly thwarted by his pushy, yet well meaning agent, but when he gets a call from his parents (Aparajita Auddy and Rajatava Dutta) saying that they are separating, Abhi hurries back to his hometown, Calcutta, only to find himself once again reliving the memories of a bittersweet romance with the whimsical Bindu (Parineeti Chopra) in the form of a mixtape, the girl next door, while also trying to sort out his personal and professional issues before they threaten to overwhelm him into submission. Will Abhi be able to write something that truly means something to him and not just a money-spinner? Are he and Bindu meant to be together, forever?

Debutant director, Akshay Roy plunges into the mad world of Abhi and Bindu right from the beginning, and takes us through the rollercoaster journey of their lives from 1983 to 1999-2000 to 2005 to present day, in a story that goes from Calcutta to Melbourne to Bangalore to Goa to Bombay and back to Calcutta again. Both director and writer Suprotim Sen keep things simple for the most, although there are times when one might occasionally lose track of whether a scene is set in present day or a flashback. The best part about the writing is how no attempt is made to make one character look like a victim at the expense of demonizing the other. It is rare to see a Bollywood movie where character flaws are tackled in such a non-judgmental manner. 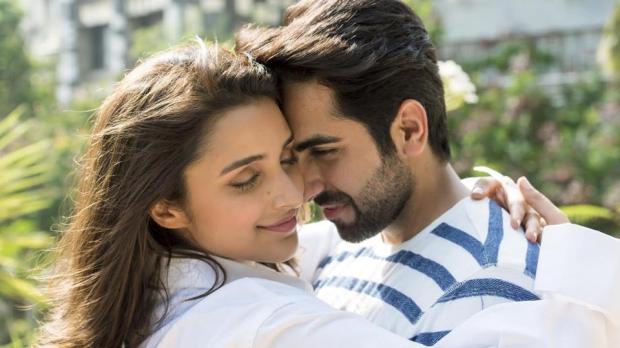 Add to that a fantastic soundtrack by Sachin-Jigar plus a compilation of retro classics ranging from RD Burman to Bappi-da (Mention must be made here of an almost magical sequence in Goa set to Mere Sapnon Ki Rani), and you have a hell of a viewing experience for the most, the only flaw here being a couple of dull stretches in the middle and also that the best song of the movie, Haareya’s picturisation being rather insipid, compared to the others.

Ayushmann Khurrana is at his genial best here, as the lovelorn Abhi trying to make sense of a relationship that had him punching above his weight for the most, and trying to find solace in his writing, while closure eludes him. Parineeti Chopra is an absolute treat to watch, and reminds us of how much we missed her during her 2 year hiatus from the big screen, and it must be said that Bindu and Abhi share a brilliant chemistry that do not allow you to take your eyes off the screen. The supporting cast here is pitch perfect, with special mention to be made of Rajatava Dutta as the slightly goofy, yet supportive dad, and Aparajita Auddy as the overprotective mom. Prabal Punjabi and Abish Mathew are hilarious as Abhi’s B-School buddies, and Sameer Khakhar is hilarious in his one scene in Goa.

To sum it up then, Meri Pyaari Bindu is the perfect weekend watch for those of you in the mood for a feel good entertainer, even though at times it’s more heart than head, not that it’s a bad thing.